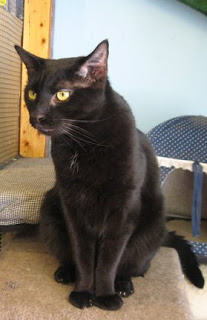 Rascal (above), who lives up to his name 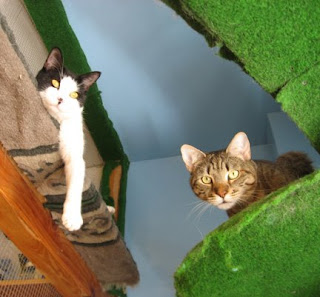 Sunday I went to Whiskers (http://1800whiskers.com/) and was greeted by Brooklyn, who had been looking out the window at everyone outside, curious and unafraid. As I came into the enclosure, he looked right at me and came right up to me to receive TTouch on his head, then he plopped on the ground on his side to receive TTouch on his body. It was such a pleasure to see him so relaxed - he has made such a transition over the past few weeks from the scared kitty hiding inside the cat tent. He would have stayed there for a while but I heard "meep meep meep", the sound of Rascal, who came running down from the upper perch and jumped up in my lap to demand my attention.
Brooklyn then went to a perch right near me to keep me company as I did TTouch on Rascal on my lap. Rascal at first was digging his claws into my legs but by the end of his paws and claws relaxed as well. I worked on his head and all the way down to his tail, little by little feeling his rather revved-up state become quite calm. Emily remained sitting on one of the perches above. She did not seem afraid, and I was able to do some ttouch on her head with the wand and with my hand, but she was comfortable where she was and so I did not want to force her to come down.
Afterwards, I spoke to the staff at Whiskers and they were very pleased especially with Brooklyn's progress (the other two cats were on the friendly side to begin with), and they feel that Brooklyn is now truly ready for re-homing. They thanked me and said they thought I had a lot to do with this. Here's hoping all three get new, happy homes soon!
Posted by sarahsuricat at 12:30 AM