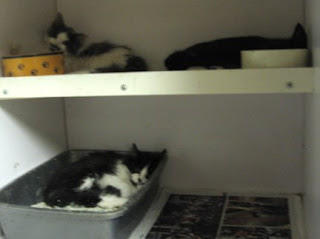 The day before yesterday I was working at Social Tees (http://socialtees.com),
and was asked to work with some very scared kittens who had just been brought into the shelter, pictured above. These three were very much more scared than the last batch of 3 (which I'll talk about later), and were fiercely hissing, showing teeth and flattened ears (and the kitten pictured in the litter box at the bottom of the above pic was also growling) when I opened the cage.
Before touching them, I spoke to them calmly for a while, telling them that I was going to be very quiet and gentle with them. Then I took a feather about 9" long and did gentle circles around the head of each cat, spending a few seconds on each one at first, to get a sense of what I was dealing with. The b/w cat continued to hiss and growl but didn't try to snap, the one on the top left stopped hissing shortly after I touched it and the black one on the top right continued hissing a bit but not as intensely. I alternated from one cat to the next doing the circles with the feather on their heads and then gently stroking down the body with it. The top left cat soon grew comfortable with this and so I gently worked my way down the feather with my hand and was able to touch its ears and body with my hand before too long. The black cat on the top right hissed every now and then, but by the end of about 15-20 minutes I was able to touch it on its body as well. The b/w cat on the bottom continued to hiss and growl for a while, but little by little this lessened, and I did manage to touch it a bit with my hand on its head before I left. I hope to visit these three within the next few days, as I feel (and hope) they can continue to make progress quickly if the TTouch is reinforced within a short period of time. It's as though they are reminded that yes, touch can feel good and that contact is something they can enjoy instead of fear. 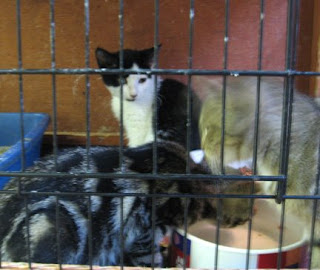 I also visited the other 3 kittens I had worked on 2 times before, and they continue to be extremely friendly, especially the swirly-striped one who had been the most frightened when I first started to work on them. Now it rubs its whole body and face against my hand and arm, and today it practically came out of the cage with me. when I took my hand and arm out.
I spent some time today with the two stripey sisters and the swirly striped cat who I have worked on before and they continue to make progress. The swirly one hissed when I opened the cage, but after just a couple of strokes with the corn dog, I was able to do chimp touches and llama touches with my hand.
These cats and more are up for adoption so check them out if you are in NYC!
Posted by sarahsuricat at 1:10 PM