Buddy is a sweet, extremely timid cat at Bideawee.  Apparently he jumped into a moving car from the street.  He is about six years old and had been neutered and ear-tipped.  He has recently been in a room with two shy female cats (actually since beginning this post one of the females, Zoe, has been adopted and a sweet male, Figuero, is now in there with Buddy and Jayne), and he is very comfortable with them, snuggling up in the litter bench with them. When I open the bench, he is usually a bit startled, sometimes even hissing, but once I begin to do TTouches with him, he becomes calmer and settles into the TTouches.  He is also extremely responsive to Reiki.
I am also working quite a bit with Jayne, who is in the same room and quite fearful. I will write more about her sometime. Sometimes when they are laying side by side, I will do a few TTouches with one, and then the other.  Jayne is much more afraid of direct contact, so I will touch Buddy first, and then sometimes she is comfortable with me touching her.  I can touch him directly with my hand, whereas with Jayne, I will usually start out with a feather or paintbrush or the like, as she prefers some distance between me and her hand.
Here is a video which I took on a day which was very quiet, and Jayne was relaxed and comfortable with me touching her directly after I had done some TTouch with Buddy.
Buddy has gotten to recognize the TTouches, and once he feels me starting to do them, now he will start pushing into and rubbing against my hand, which is so sweet to see.
He had to have some dental surgery recently, so he was in a cage by himself for a while.  I wanted to help him to relax, which hopefully would encourage him to eat as well.  I offered him Reiki with my hands slightly off him, and also did some TTouches with him.  A TTouch that can often work well to help energize a cat who can become "frozen" is the Zigzag TTouch.  The Zigzag TTouch helps to connect the body, as well as helping the animal to feel more inside of his body.
After he went from the cage back into the room with his friends, he also went back to camping out in the litter bench (a bench which is hollow inside with an opening so cats can go in. A litter box is usually in there, but if cats are hanging in there, often the litter box will be removed).
When I opened the bench he was a bit startled, as usual, but once I began to speak to him softly and began doing some TTouches with him, he began to rub his head against my hand and roll around as he had been doing before.
I put my hands underneath him and gently lifted him a couple of inches off the ground.  This prompted him to stand up and come out of the litter bench, which was great!
He began to head butt me and roll around as I did circular TTouches and Zigzag TTouches with him. I find that after doing some of the circular TTouches, the Zigzag TTouches can help a shy, held-in cat to be so comfortable and often can get them to start moving around. 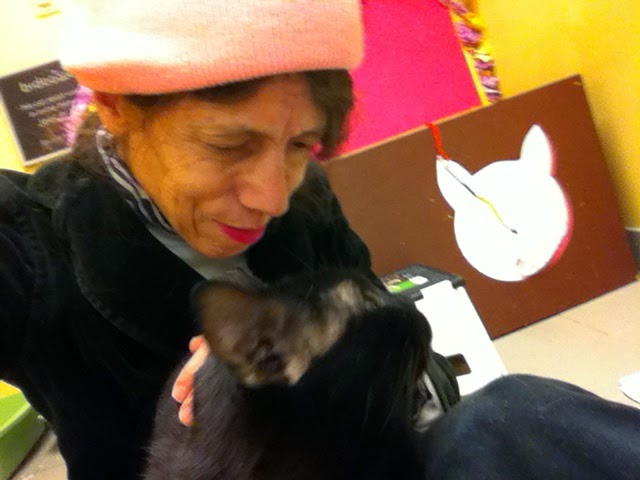 After a few tries of picking Buddy up and placing him in my lap, he decided to settle there for a good while for some Reiki. 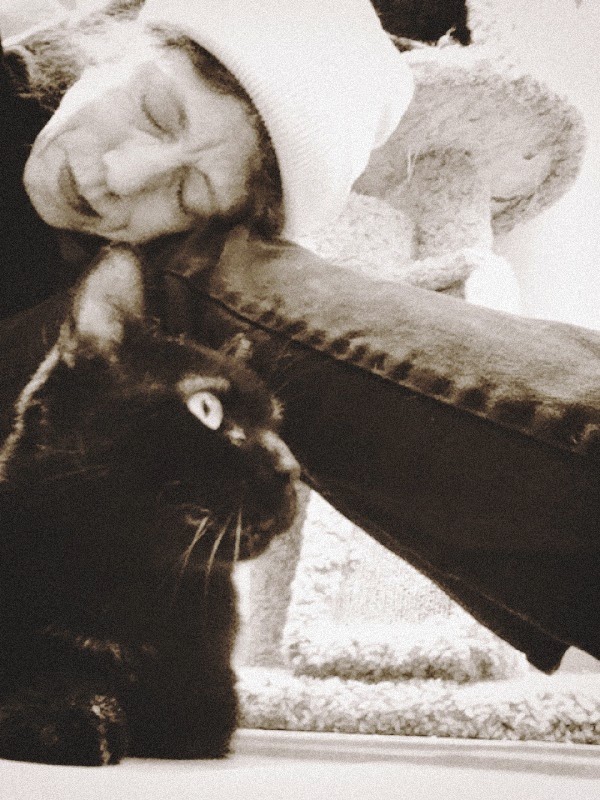 And after he came off my lap, he settled right beside me for a longer period of time and more Reiki energy.  It was beautiful to feel and see him so relaxed.  When I have that type of connection and opening feeling with an animal, I feel my own heart opening as we connect with each other.  It is a feeling of pure love that fills me with pure joy. 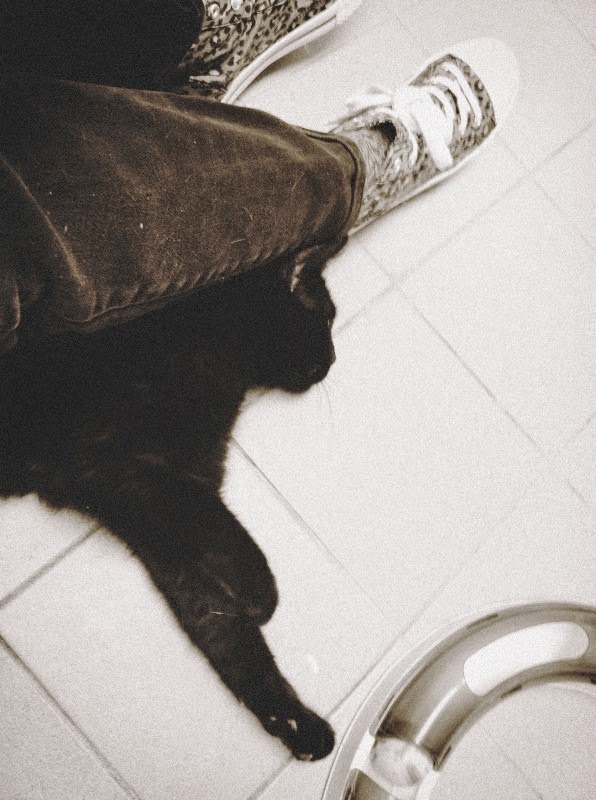 Buddy even napped for a while under my legs as we continued the Reiki session. 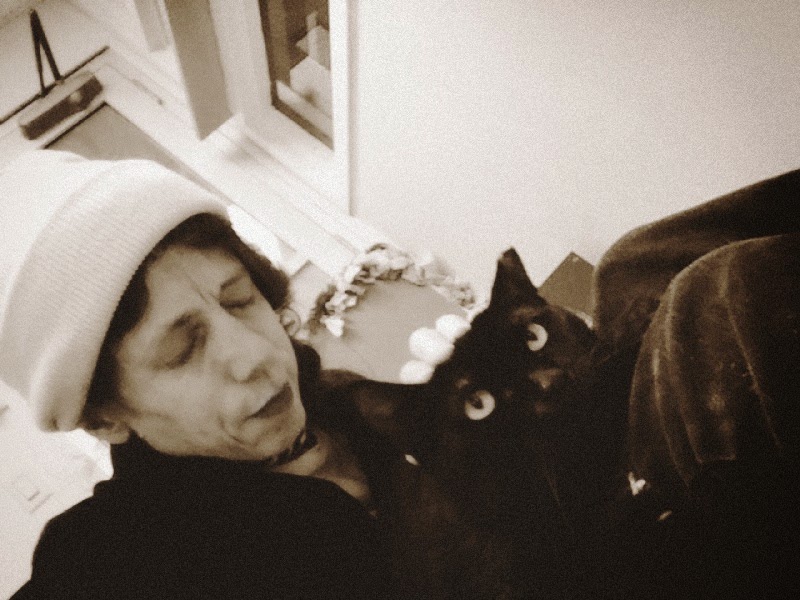 And above is another shot of him on my lap. 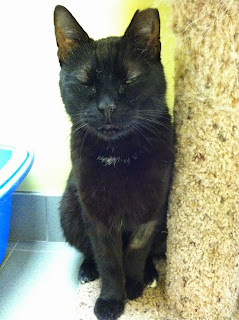 In another recent session, I began to try some subtle body work which I have been learning by reading Mary Debono's book, "Growing Young With Your Dog", which describes body work for both you and your dog (can be applied to cats as well).  She is a Feldenkrais practitioner who has developed her own method which can be applied to animals, which is extremely similar to TTouch in philosophy and feeling, as it influences the nervous system.  When I started doing this very gentle work with Buddy, it was a new feeling to him, and he stopped and stared straight into my soul, as if to say, "Thank you for being there for me".  Time slowed down and there we were, just Buddy and me, our energies merged and we were connected in this beautiful moment which felt beyond time and space. A connection of love and trust and opening. 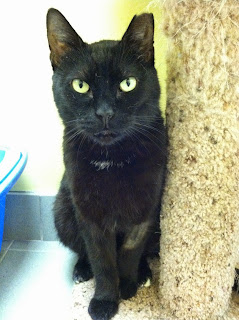 Now Buddy will readily come out of the litter bench for me on his own. 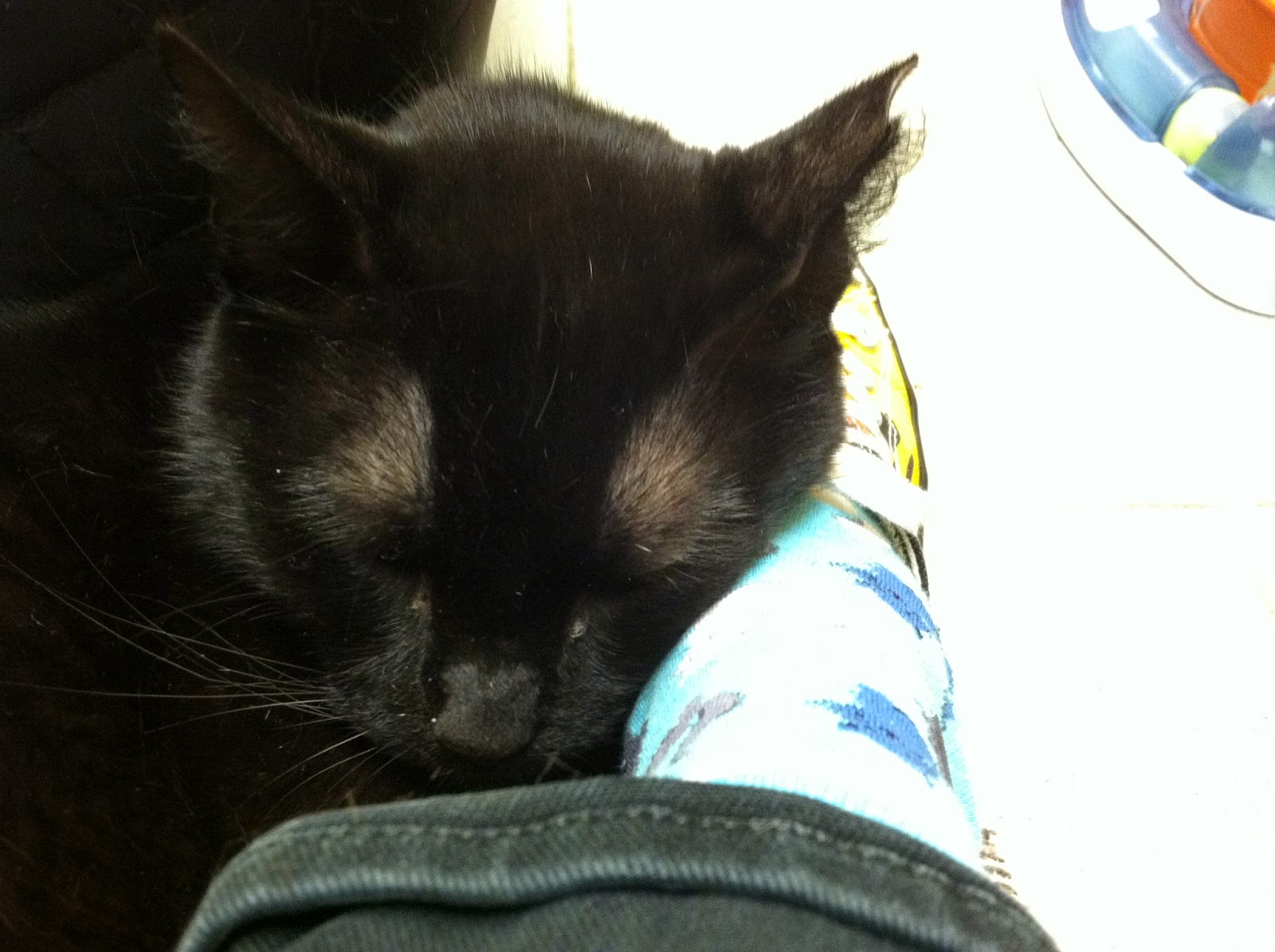 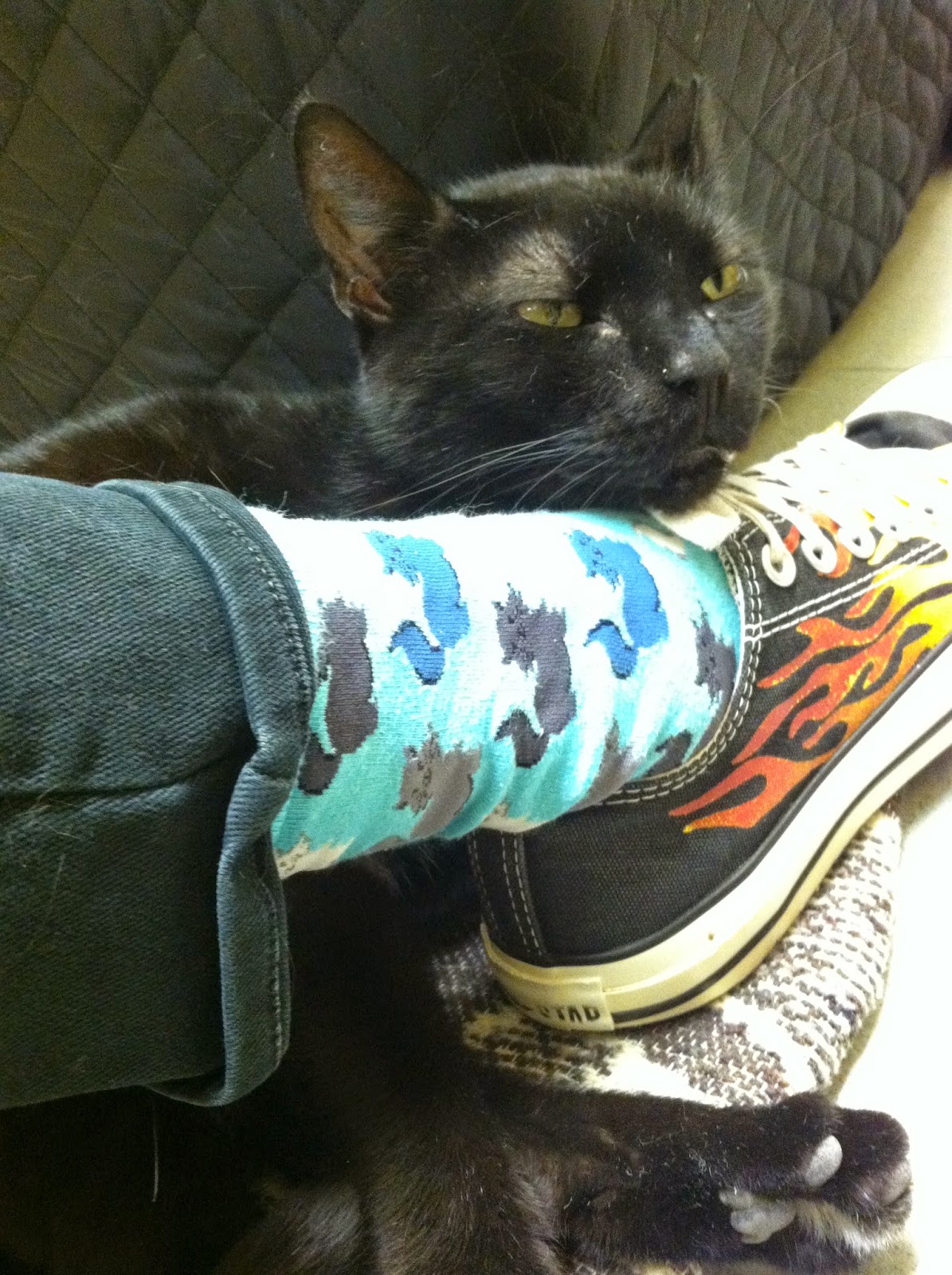 And last time I worked with him, he took a nap with his head on my foot and settled in for some TTouches on his paws:)

Buddy still starts out frightened with someone new, but I know that in time, the right person will enter the shelter and make a connection with this sweet cat.  He is a gentle, sweet soul, and just needs a little time to let go of his shyness. Look forward to seeing you soon, little guy! xoxoxo
Posted by sarahsuricat at 3:09 PM No comments: