Sharing the Light with Mr. Ji 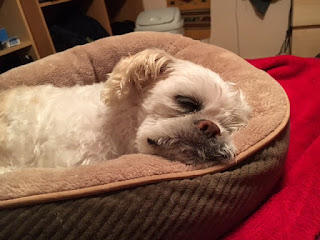 Mr. Ji is a little senior Shitzu with a big spirit.  His caretaker, Niseema, is a skilled massage therapist (for people) and is giving him amazing love and care.  I was contacted to see what I could do to help Mr. Ji's comfort level.
He has musculoskeletal issues, apparently spinal stenosis.  He has some feeling in his back legs but they cannot support him, so Niseema has a customized cart for him which helps him get around very well.  He tends to twist to one side, and has a lot of tension in his upper body because it is working very hard to help the rest of his body get around.
I have been working with him with a combination of Reiki, TTouch and Debono Moves (Feldenkrais work adapted for animals).  I keep my mind, heart and body open and he helps show me what is most comfortable for him that day.  I have shown Niseema some of the work so she has been able to do it with him as well, which is great! 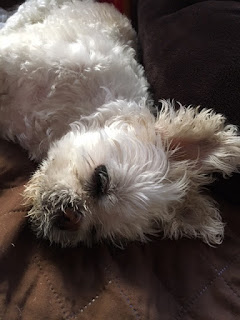 Today was an especially beautiful, peaceful session.  It generally takes him a while to settle into a position which is comfortable for him, but today that seemed to happen more quickly.  One thing that Niseema told me later was that they had an animal communicator help them a few days ago, and that the session was very productive -- that he had generally seemed more at ease after that.  She had contacted the communicator to see if Mr. Ji was still present and wanting to be on the earthly plane, and the communicator had sensed that he still was very much here and wanting to be here.
Niseema put a rolled up small blanket along his side so that he could have support there.  He seemed comfortable leaning against it.  I started letting Reiki flow.  I intuitively put a hand underneath his belly, picturing him as though he were standing even though he was on his side.  I was feeling he wanted support there.  I made a very subtle lifting motion, barely perceptible, then did a long release.  Each time I released, I imagined breath and light expanding into his body.  As I did this subtle motion, I felt him become very peaceful and still and comfortable. I felt my hands become one with his body, feeling him breathe and expand into my hands.  I would do the subtle movement for a while, then stop and just imagine it.
I had my other hand gently against the top of his back, not putting pressure there but just resting there and feeling the Reiki energy flowing from both my hands.  I felt the energy flowing from my hands through his body, feeling it going all the way into his head, feet, tail.
I pictured light inside of him and surrounding him, the Reiki energy merging with his own bright light that exists inside.  The bright light that resides inside all of us, even when a being is older or not well.  It might be just a flicker, but connecting with that flicker can help the light to grow and expand.
I felt him so calm and peaceful.


Then I started to picture just the slightest movement around, as though I was lifting around the cylindrical shape of his body in one direction, and then in the other.  Again, I was mostly thinking the motion rather than actually doing it.  But I could feel the slight rhythm and expansiveness of it.  Then I would pause and let that go.
There were long stretches where I would simply let the Reiki flow with my hands still.  Just feeling the expanse of the energy through his body, the light and the energy relaxing him.  His peacefulness and the quiet and peace throughout the room.
He has a strong, big spirit and I felt that during the session.  It often happens that I feel the animal I am working with as being very big, as though I am connection with their spirit rather than the confines of their body.  I visualized him walking with ease, using all four of his feet.  Feeling grass underneath his feet and walking with ease.  Feeling his body supported and his feet on the ground.
After about an hour, I felt the Reiki energy starting to ease off, and I gently ended the session.  Niseema said that they would both probably take a nap now:)
Thank you Niseema and Mr. Ji!  Look forward to learning and sharing with you more and more. xxoo
Posted by sarahsuricat at 3:33 PM 1 comment: