Happy Update re Bubbles the Kitten 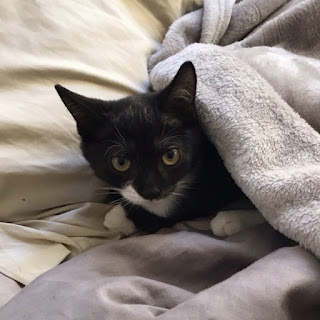 Bubbles is a dear kitten who was at BARC Shelter.  I spent a lot of time with him with Reiki (both in person and remotely) and TTouch, and he had been in very rough shape, and we formed and incredibly deep bond.  When I previously wrote about Bubbles (http://sarahsuricat.blogspot.com/2017/12/listening-through-heart-connection.html), he was rallying after some really tough health issues, but still not quite out of the woods. I wanted to share a happy update that he became healthy and strong, and recently was adopted into a loving home:)
He is living with a lovely couple and their sweet dog.  Bubbles has been re-named Juno, and is adjusting well to the apartment and to his new dog friend as well.  He is eating well, playing a lot, and having a joyful existence!
Much love to you, little guy, will always remember you and love you, and I am so happy for you!  May you have a beautiful life!  And many thanks to the lovely people and dear dog who opened their hearts and home to him:) 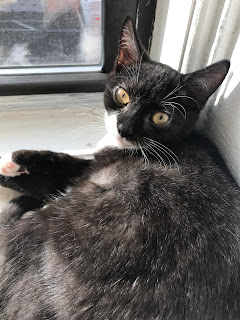 Posted by sarahsuricat at 1:02 PM No comments:

Celebrating Each Day: Reiki with Brooklyn 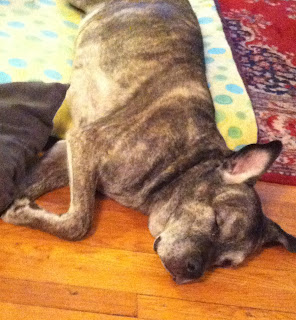 I was called to work with dear Brooklyn, a sweet senior Mastiff, because her people, Monica and Ignacio, thought she was very near the end of her life and they wanted to give her whatever comfort they could.  She had been taken to the vet for examination and tests, and had been found to have cancer, which had caused fluids to build up in her body, greatly affecting her breathing and mobility.  At this point she was not able to walk on her own. The vet thought perhaps she would have a couple of more days at most.
In the first session with Brooklyn, Monica sat with her and petted her to make sure she was at ease, since I was a new person.  I sat a short distance from them.  Brooklyn fairly quickly relaxed into the energy.  At times her breathing was rapid, but I could see it start slowing down.  I imagined peace and light surrounding them, and began silently chanting the Reiki symbols.  I felt her connecting with the energy, and since she is a very large dog, I felt the bigness and power of that energy as well.  I felt the room filling with the light and energy. 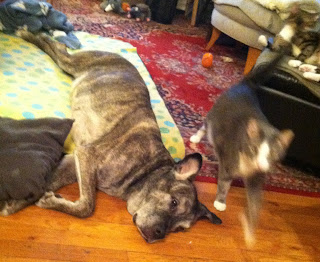 By the end of the session, I felt her quite peaceful.  I also felt the atmosphere of the space in the apartment peaceful as well.  There are two sweet, beautiful cats in the household, Luca and Tommy.  Tommy is usually very shy with strangers, yet they had both come out to see what was going on.
At this point, we did not know what was going to happen, but we made another appointment for the following day.  We ended up doing several days in a row.  Particularly when an animal is in a precarious condition, it can be really helpful to have at least several appointments very close to one another.  And I felt Brooklyn's strength and personality coming more forward with each session.  Her breathing started looking more normal, the swelling in her leg went down, and by the following week she was able to walk on her own again.
Often, particularly in the early sessions, I visualized Brooklyn running and running in grass.  It was amazing to hear she was able to walk again, and these days she even wants to run and play.
Here is a photo from one of these sessions that Ignacio took - it looks as though Reiki energy is coming in as light from the window! 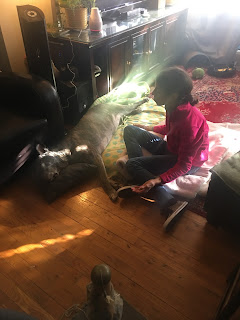 I think it is important to share that one cannot know what will happen with Reiki, but that it will always help on some level.  At the very least, in this situation it provides more peace and comfort for the animal, and in a best case scenario, it can help an animal with a terminal disease to have more quality time.  So in Brooklyn's case, her people are aware of her medical status, but are embracing each day with her, and I am so happy that she has been able to come back from the precarious situation she was in a month ago when I first started working with her.  I am happy for every good day that she can have, and every beautiful moment she can have with her family. 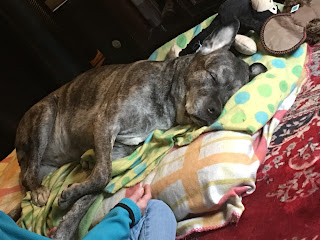 It is now a month after the vet had said she would only have two more days -- and at the moment she is doing very well:)  Monica says that if they didn't know she had cancer, they would just think she was just having some old-age issues like arthritis.  Brooklyn's energy continues to feel strong when I see her.  Apparently she wants to run and play a lot now - in fact, her people have to calm her down so that she doesn't overexert herself.
We are continuing to do regular sessions - one distant session and one in-person session every week, and that seems to be working well for her at present. 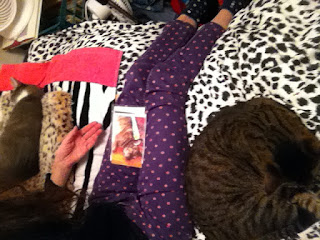 As they often do, my cats have been joining me for the distant sessions with Brooklyn.  It feels like they add to the energy - that they send their healing vibes as well. 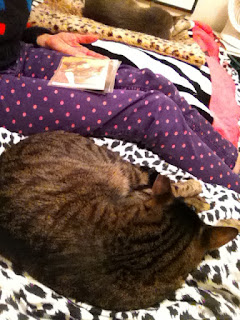 And again, it is interesting to note that in the distant sessions as well as the in-person sessions, I feel the bigness of Brooklyn's energy.  It truly feels like she is present with us during the sessions.  Energy knows no boundaries, so Reiki's power can be felt no matter how close or how far away you might be from another being. 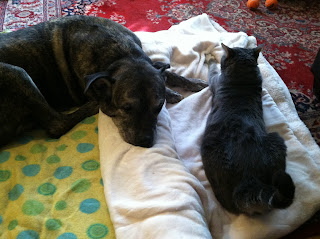 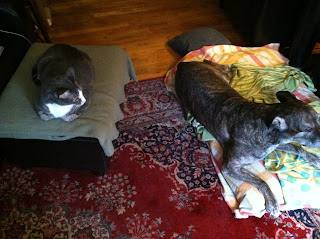 The cats came to the household in such an incredibly moving way - Brooklyn discovered the two of them, abandoned in a carrier in the garbage:( 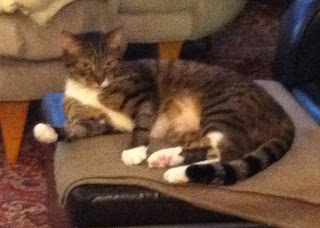 Tommy﻿
Monica and Ignacio kindly took them into their loving home. I know that the cats are eternally grateful. 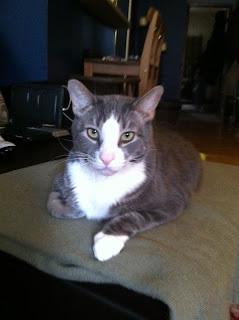 Luca﻿
Brooklyn is sensitive and attentive to sounds she hears, and at times it takes her a bit to settle, but eventually she always does, and there is such a palpable feeling of love and peace filling the room.  I feel light and energy flowing through her body, and filling the room as well.
Either one or both of her people are always present for the session, and I think that gives her a feeling of safety as well.  Brooklyn wants whichever one of them who is home to stay in the room with us during Reiki, so that is what we do:) I usually incorporate some TTouch and/or Debono Moves into the session as well, to add to Brooklyn's comfort. 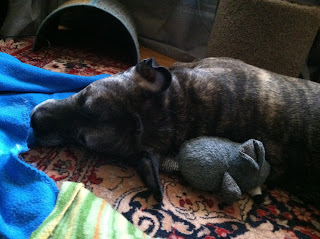 Thank you Brooklyn!  I love every session I share with you, and here's to more comfortable days ahead for you. And thank you to Monica, Ignacio, Tommy and Luca for being such a loving family for her xoxo
Posted by sarahsuricat at 1:53 PM No comments: