The Power of Love, and Learning to Let Go: Berry, RIP 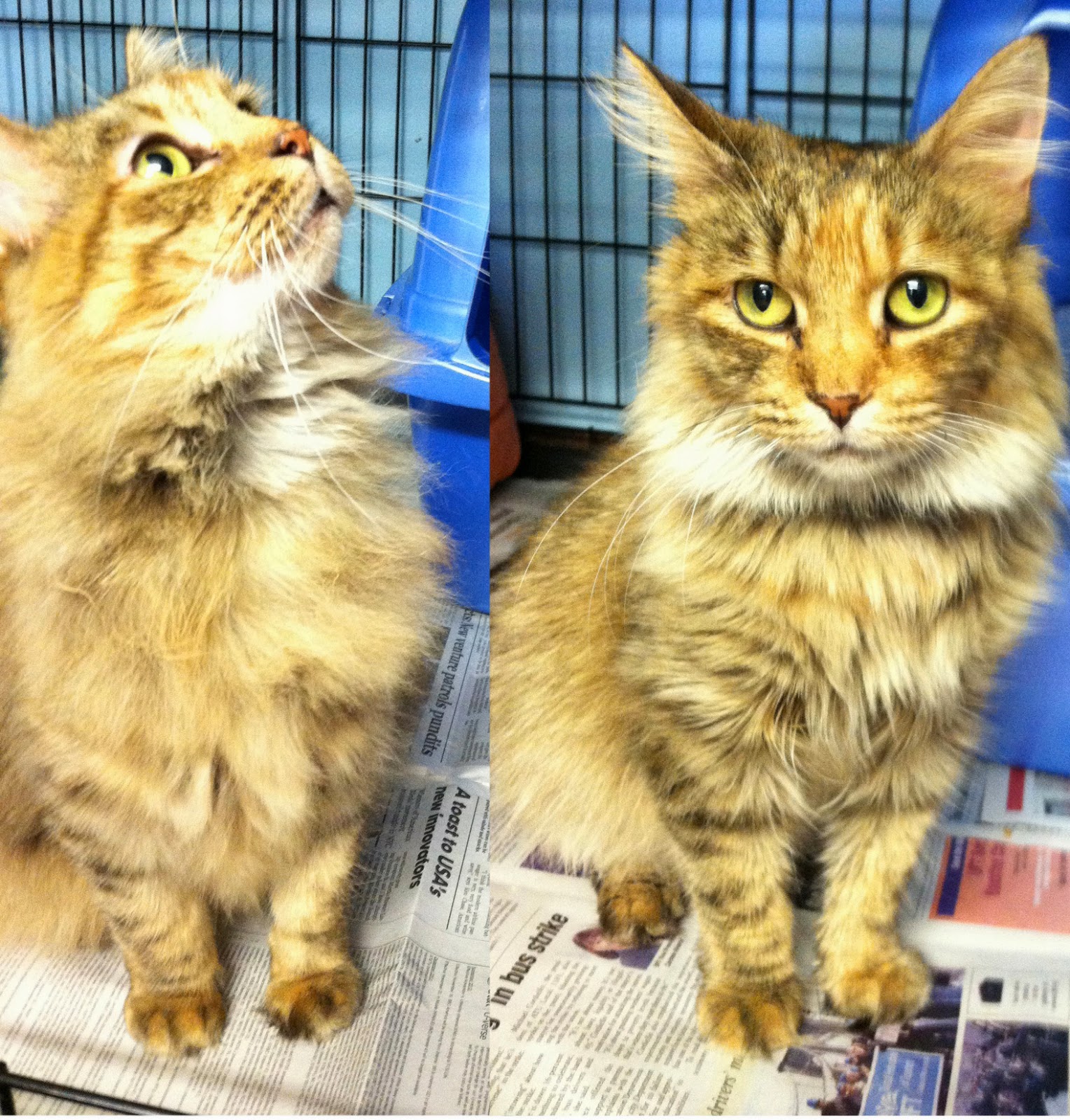 It is always so difficult to say goodbye to an animal friend, and even harder to figure out how to write about it and how to write about the power of that connection, a connection that exists far beyond the physical body.
Berry's heart and mine are inextricably intertwined.  I know that we learned so much from each other, about love, about trust, and about letting go.

Berry arrived at BARC Shelter the day before Hurricane Sandy hit.  She had been rescued from the same back yard as my cats Natalia and Lulu (I often referred to her as their sister), and it was evident from that first day that she was feral and, if anything, even more fearful than my cats. She was put at a cage way in the back of the shelter where she would have more privacy and would have a chance to calm down.  She was originally named Barracuda - a name which I refused to call her, so I soon decided her name was Berry, and others at the shelter began to call her that so that was the name that stuck.

Above, before and after: Berry when she first arrived at shelter, and then about a year later.

As you can see from the "before" picture on the left, Berry was initially very distrustful of any human being.  She was fearful and angry, lashing out at anyone who opened her cage.
However, I always felt that with faith, love, patience and positive energy, this could change.
I began by simply sending her Reiki from outside her closed cage.  I also spoke to her a bit, but very softly.  I did this for several sessions, then I decided to see if I could touch her with a back scratcher, which would give her a lot of space.  I just did one or two TTouches on the top of her head, then closed the cage and gave her a break.  I continued doing this over the next sessions and one day she began to push back up against the back scratcher.  It was then that I knew we were making progress and that I had felt that opening, that opening where our energies and our hearts could meet.
Over the next days, weeks, months, we made steady progress.  I made sure to just go a little at a time with her, and we kept moving forward.  She started to be comfortable eating from her bowl, which was at the front of the cage, while I was TTouching her with the back scratcher.  So it wasn't too long after that before I started to be able to touch her a bit directly with my hands. 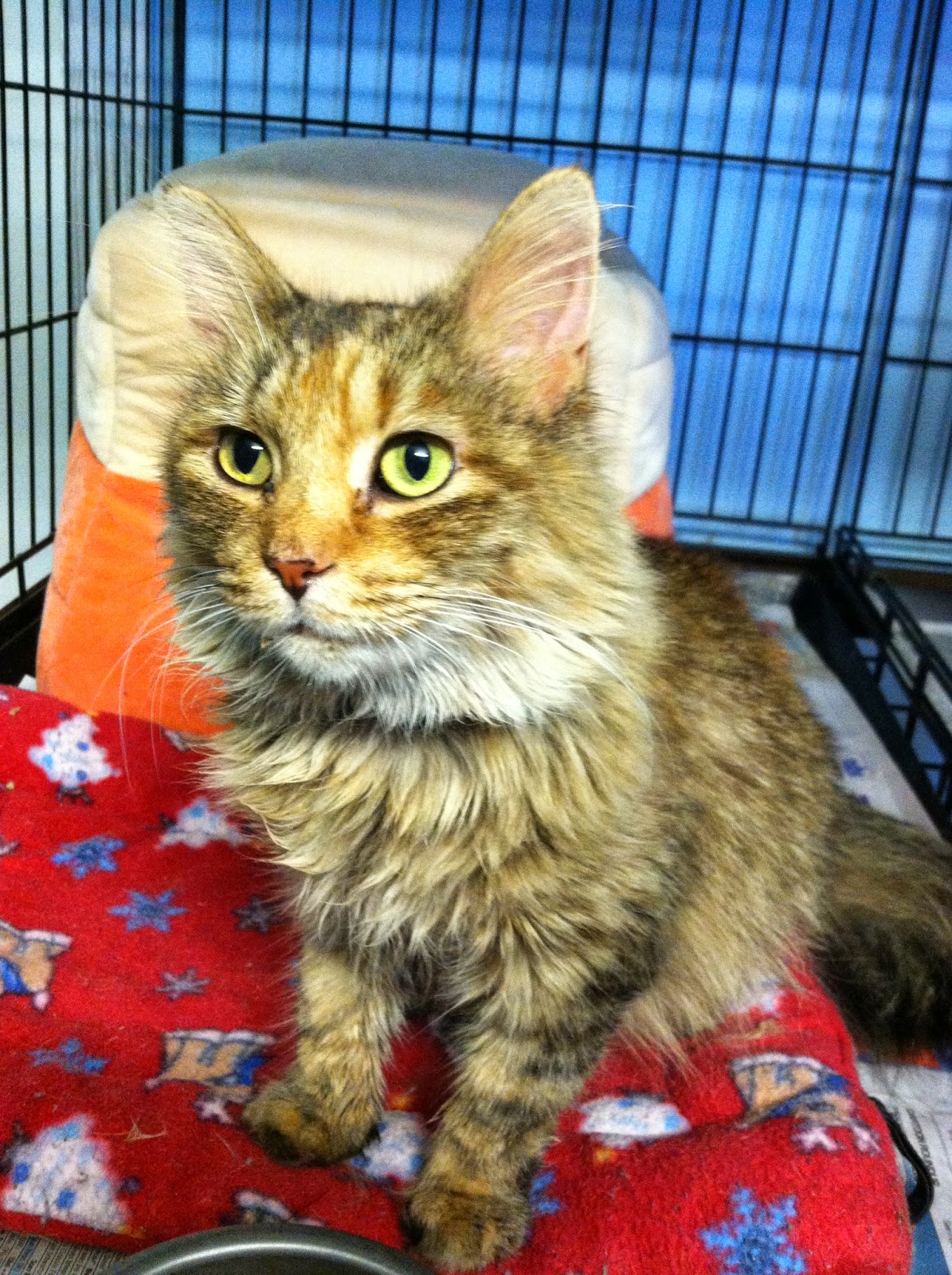 I was feeling she was actually enjoying the contact more and more, and she started responding to me when I would walk back towards her cage and call her name.  She would look up and start to come towards me. And over time, she would actually come trotting to the front when she saw me and I called her name.
As time went on, I was able to have more and more contact with her, and I showed a few of the other seasoned volunteers how to do TTouches with her gently with the back scratcher, so that she could slowly get used to other people having contact with her.  And she slowly became comfortable with that.  When someone came to the cage with the green plastic back scratcher, she knew that they were going to gently stroke her with that and that was something she enjoyed.
As the time passed, Berry was not only transforming behaviorally but physically. As the beauty of her true personality came forth, it manifested itself in her physical appearance as well.  A couple of people who came into the shelter who had not seen her for some months did not recognize her as the same cat!
She had also had an awful problem with what initially seemed like a constant cold, but later was found to be a nasal polyp, so once that was removed, she seemed to feel a lot better.  And that was great to see.
Berry and I were so close, our hearts so connected.  I know that she trusted me.  Even when she was more comfortable with me, I would go slowly, not wanting to frighten her or overwhelm her, wanting to be respectful of her.  We knew each other's energies so well.  I would connect with her with Reiki and TTouch and we felt like one being, merging in a flow of light. 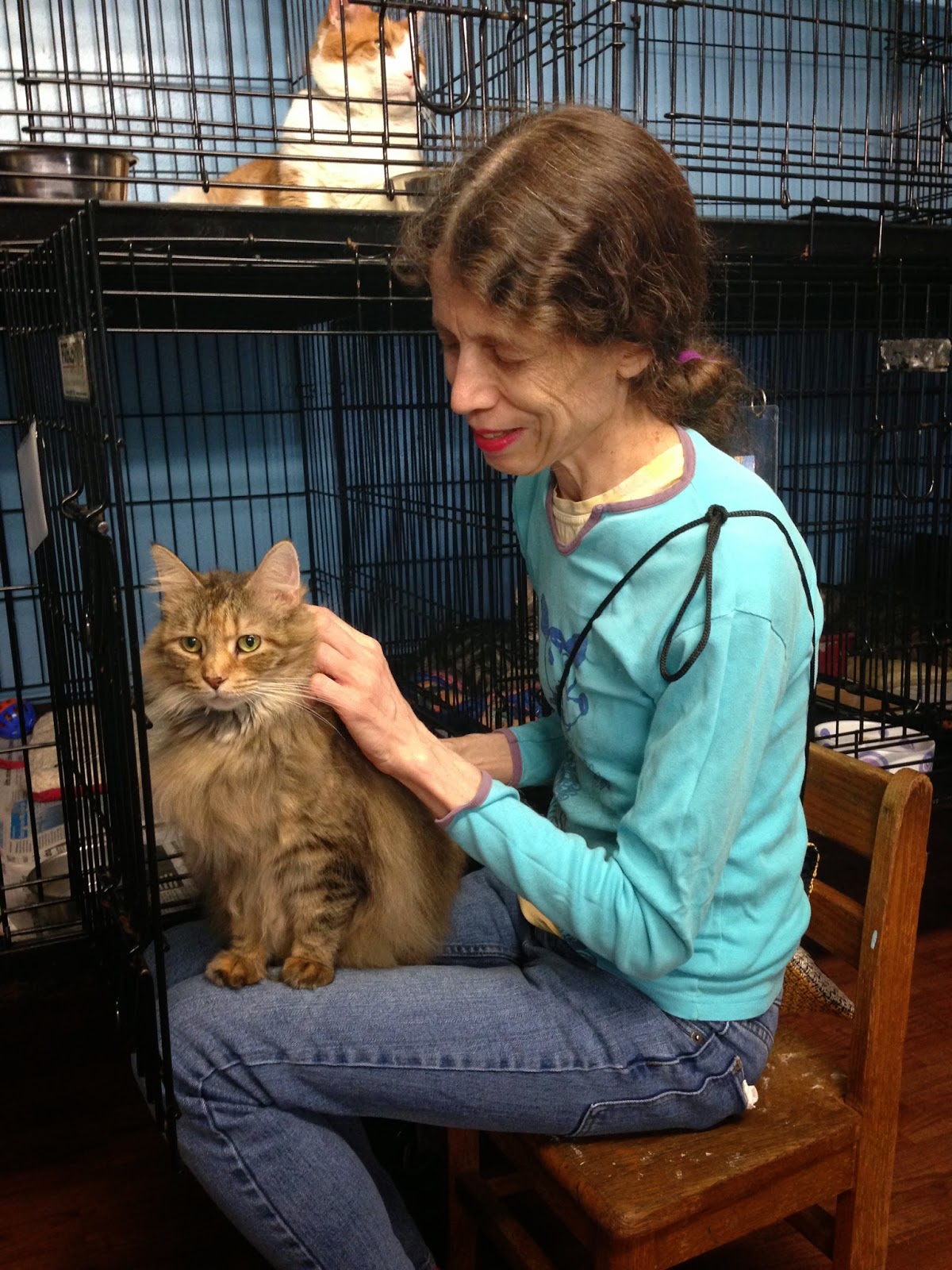 Recently, I wanted to get to another level with her, and so I started luring her onto my lap with treats.  She took to this very well and one day she came completely out on my lap, which you see in the photo.  First she had put two paws on my lap, then three, then there she was, sitting on my lap! 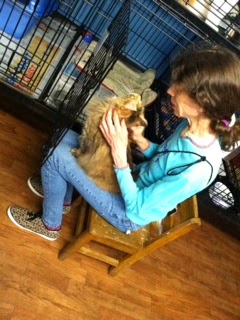 She was a bit startled at first, but it was understandable.  She was realizing that there were cages and animals above her, and was seeing all around and feeling the concept of that openness all around her.
I saw her look above and around, and it was such a beautiful feeling - I felt it too, her having that feeling of the world expanding, opening up.  The open air, outside the bars of the cage.  I wanted to stay in that moment with her forever, her on my lap, feeling completely connected with her like one being, in that moment.  Feeling that expanse, that openness, like we were surrounded in light together.
A week ago, when she turned around I noticed a huge raw sore on her back, and also noticed her pulling at her skin other places.  It looked bad and I was disturbed by seeing this, so I told the shelter people right away and they were going to have her looked at.  It actually brought to mind my first cat, Timmy, who had surgery for breast cancer and was ok for a good while after that but then began breaking out in skin lesions.  But at the time I wasn't thinking that Berry had anything life-threatening going on.
So it was such a shock when I got a call from the shelter that the vet had looked at Berry and found that she had a huge mass, which was moving up towards her lungs, and as a result had euthanized her.  Apparently she had also gotten weak and was not breathing well.
It was so hard to hear this, to accept this.  That this creature who had been alive, active, seeming to feel ok just a few days ago had been so ill??  I consulted my dear friend and colleague, animal communicator Eileen Garfinkel (http://dreamsofamelia.com) to see what we could learn from Berry.
Apparently Berry had hidden her illness.  She didn't want me to know how sick she was, she knew how stressed it would make me.  Berry wanted me not to be sad, she wanted me to know that she was fine, she was at peace now.  That I helped her to be ready to transition.  That she knew how much I loved her, that I had given her so much pleasant time, that I had helped her to change deeply, at a molecular level, and that I was her person.
I miss her so much, but she is still with me, curled up inside my heart. And I thank her for teaching me so much about the power of positive energy, the power of unconditional love, the power of appreciating the moment, and about how to let go.
And thank you to my dear BARC friends for all the kindness you showed her.
xxoo
(please feel free to read more about my work with Berry, type in "Berry" on the Lijit Search on the right hand side of my blog and the links will appear)
Posted by sarahsuricat at 7:56 AM 2 comments: