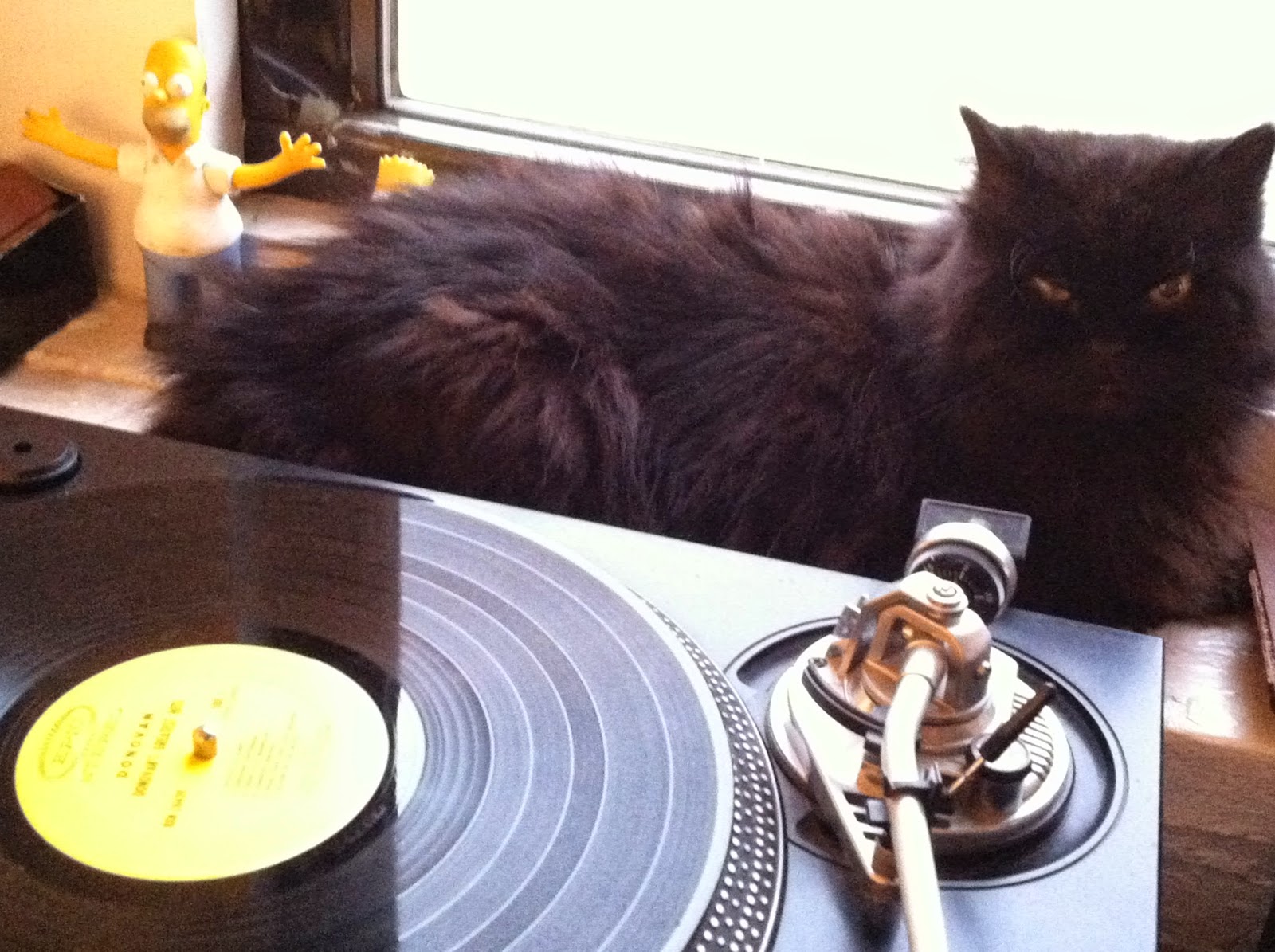 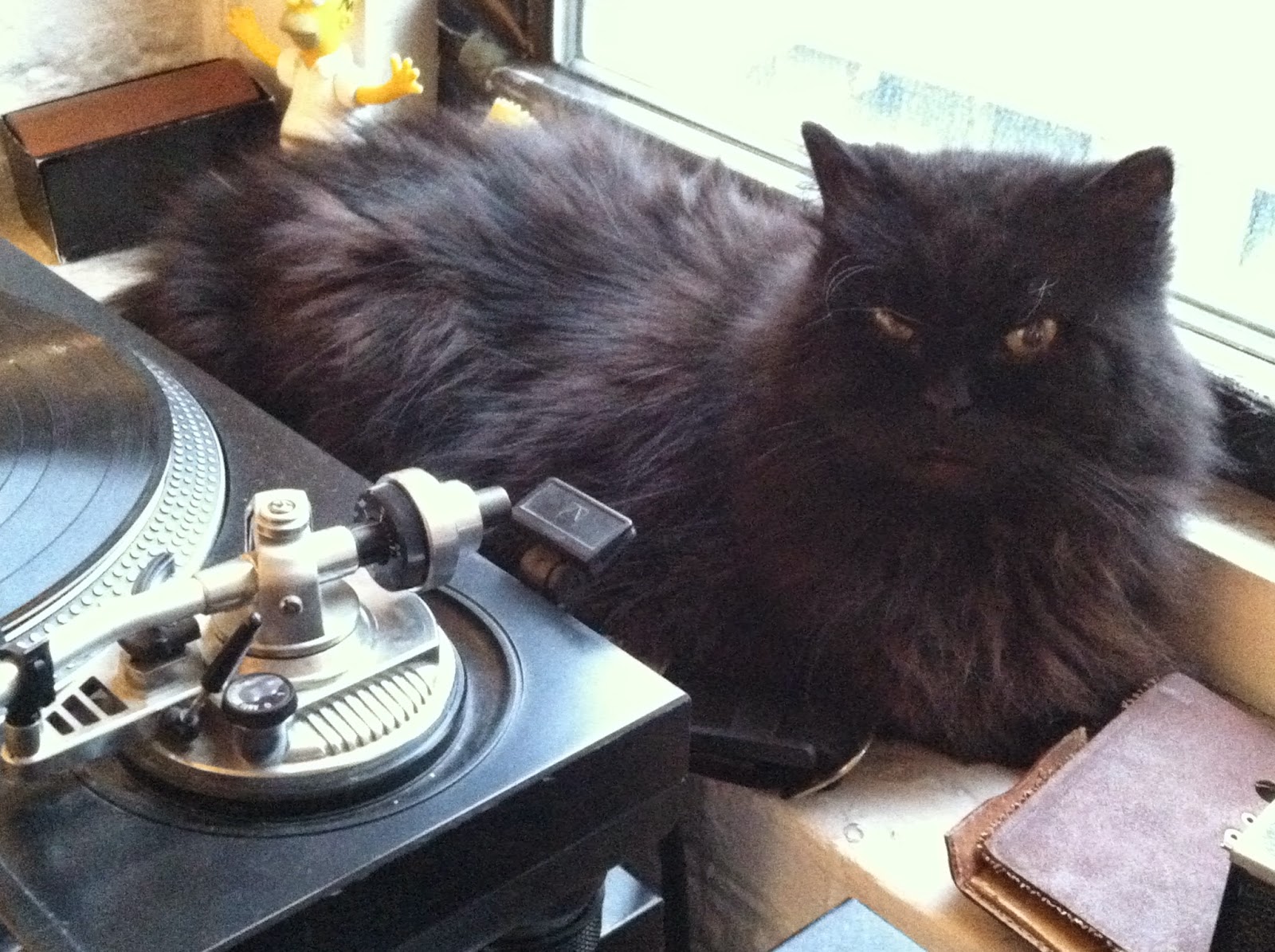 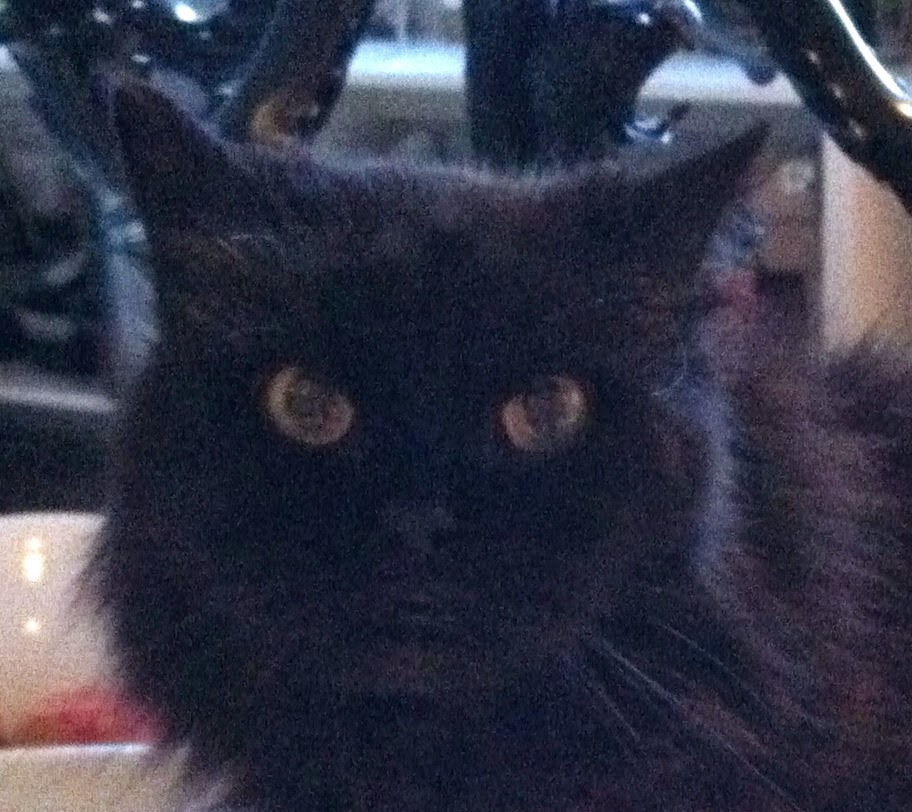 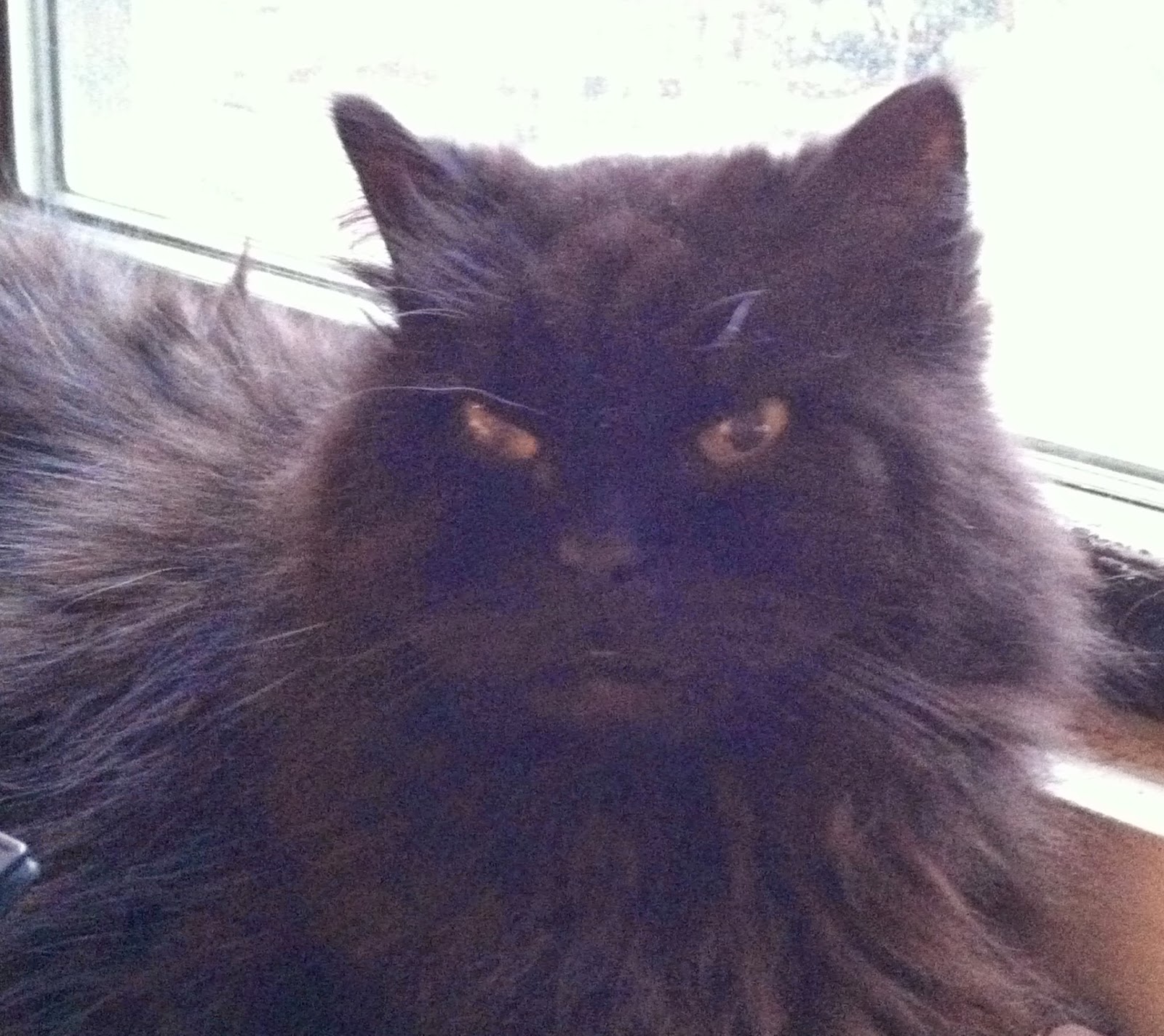 This was the most powerful session with him yet.  He is getting more comfortable with me each time and it feels the energy is connecting at a deeper and deeper level.
For a long time afterwards, I kept feeling his presence, a presence much bigger than his physical body, a strong, flowing presence of beautiful black fur and powerful green eyes looking straight into my heart and soul. The animals have so much to teach us.  xoxoxo
Posted by sarahsuricat at 6:45 PM No comments: 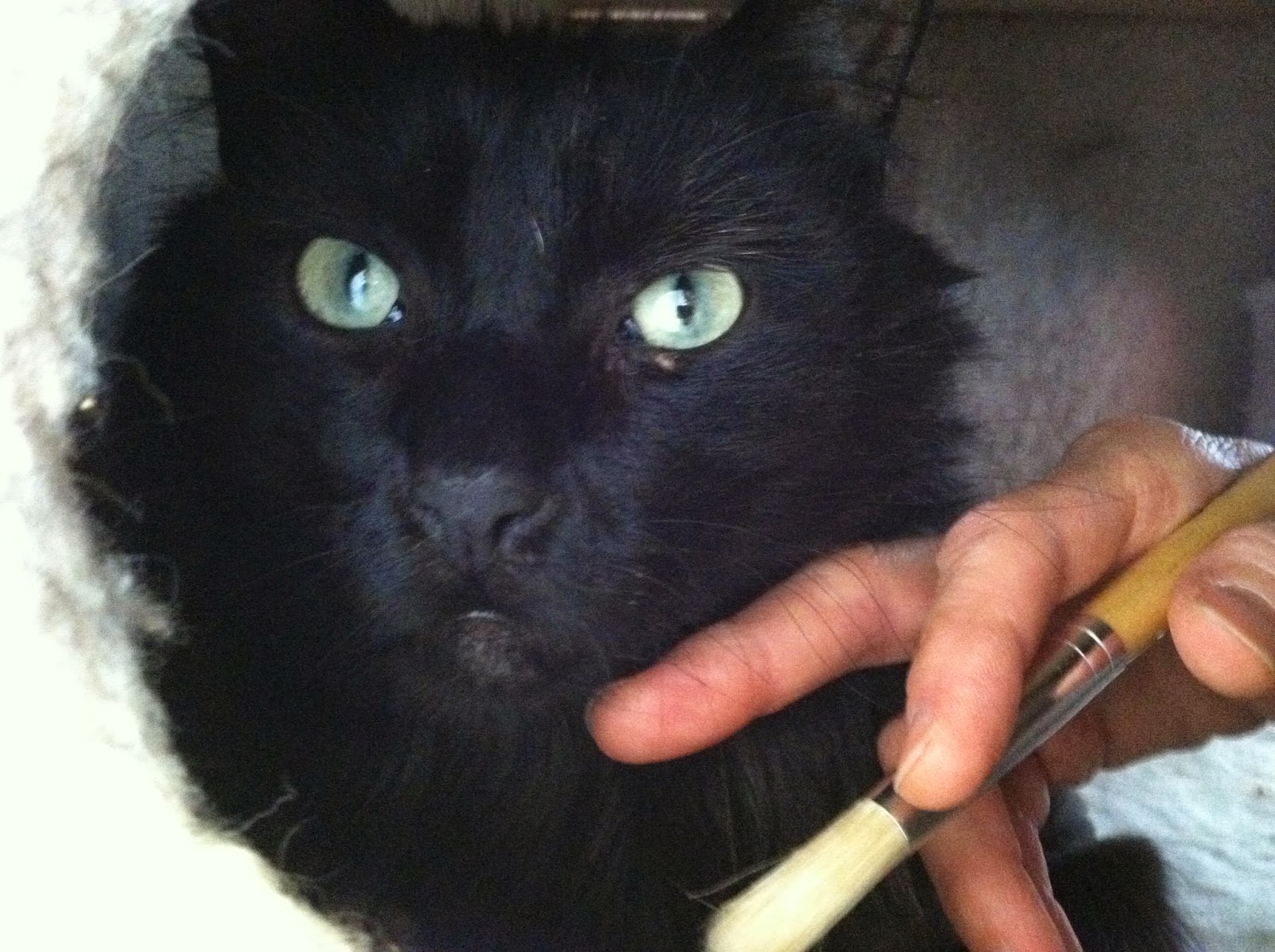 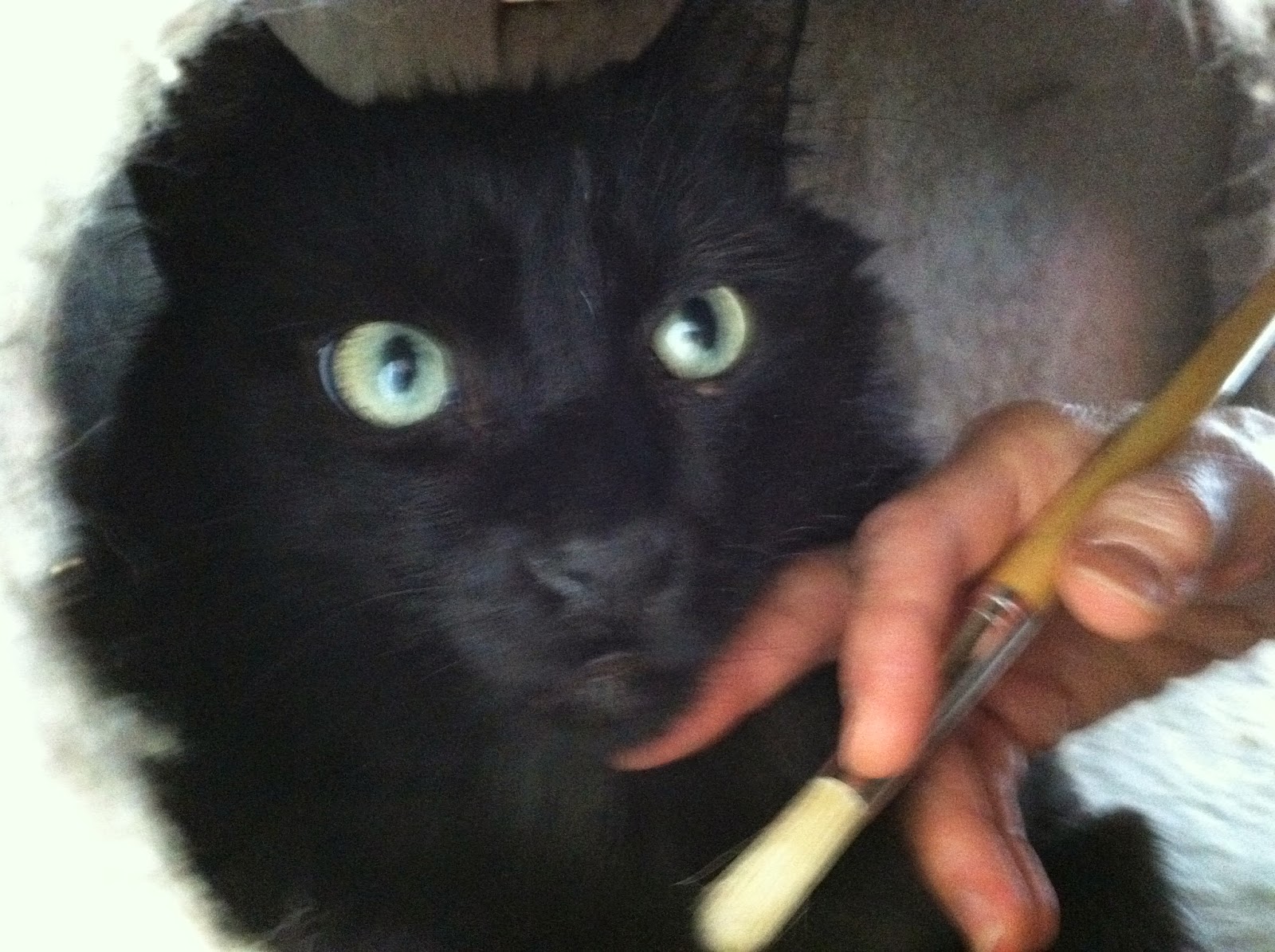 About a week ago, he was in his little box and he seemed so relaxed with me while taking the treats from my hand, I decided to try the paintbrush again.  This time, he was receptive to it.  And shortly after that, I was able to do a few strokes lightly along the side of his face with the back of my hand.  And he began to really settle into the TTouches directly with my hand, and to be responsive to them, even pushing into them a bit, so that was really new for him.  I spoke softly to him, praising him.  It was such a lovely feeling, to feel that connection, to feel him being comfortable with my hand doing the circular TTouches.  I even was able to do a bit of TTouch on his body, which I had not been able to do.  I paused, did a little bit more, and then decided that was enough.
A couple of days later, Kerrie had told me that she was able to lightly stroke the side of his face with her hand as she gave him treats, which was great to hear.  That may have been just enough touch for the day, because when I worked with him, he initially seemed receptive but then seemed to be afraid of the brush again, so I backed off again, just doing Reiki from a short distance.
When I returned to the shelter a couple of days ago, I decided to focus on the treats, and gradually take it from there as far as direct contact.  I crumbled up the treats on my hand.  He was out of his box, and came right to me for the treats, licking my hand after he had licked the powder from the treats off, so that was great.  I did that a few tiems, then did a Reiki session with him.
Then a couple of days after that, when I returned to the shelter, Panther once again stayed out of his box, came right beside me for the treats, and even took a few treats off my leg.  He licked my hand after the treats were gone.
Mariah was also very interested in the treats, so she planted herself on my lap.  Panther didn't run away at that point, both of them stayed, enjoying the treats, which I crumbled into tiny bits to get more mileage out of them.
As I gave Panther the treats, I was able to stroke him a bit under the chin and alongside his face.  I want it to all feel like an organic process, so I am not pushing the contact.  With a very shy animal, it is often a matter of breaking down a process into small enough steps so that they always remain comfortable, yet you are able to inch forward with them a little at a time.
Panther has definitely been more out and about in the room lately, which is fantastic.  He has been receiving custom Bach Flower Remedies from me as well, in both spray and drops form, so I am sure that is helping him to feel more at ease as well.
It is such a beautiful feeling when working with a shy animal, and I am able find that little opening where they are comfortable and that connection can happen.  It is a feeling of our hearts connecting, a feeling of love and trust, of our energies merging.  I am always so honored when this happens.  And I always thank them after the session.
Much love to you Panther!!! And much love and appreciation, as always, to the Bideawee folks who give the animals so much love and care.
Posted by sarahsuricat at 11:19 AM No comments: