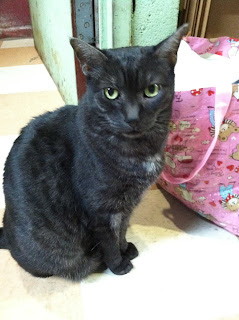 I have been working for a while with dear Sylvie at Downtown Veterinary Clinic.  Sylvie was taken in by the clinic after having been abandoned on the streets of New York City in a roller suitcase.

She was terrified at first, understandably, and was very distrustful of people and of other animals, hissing and swatting at anyone who came near her.

I have been working with her very slowly and carefully using a combination of Reiki, TTouch, treats, play, and some other tools and tricks.  Reiki is wonderful because I do not have to touch her physically for her to feel the calming energy.  So on days when she is not in the mood to be touched, I will just sit near her and let the Reiki flow.  She has been comfortable with more and more contact over time, and is more at ease with me just sitting near her.

However, a couple of weeks ago, I felt like she was starting to be a bit more withdrawn again, I think as there had temporarily been more traffic of people and animals in the office area where she is living.  I knew I had to throw something new into the mix to capture her interest and help her fear subside.

When you are working with an animal and things are feeling as though they are stuck or moving backwards, I think it is helpful to follow your intuition and try something new.  As the TTouches do their magic by working with non-habitual movements, adding some variety into an animal's routine can often help you move forward with them.  In the case of cats, you need to use sense and sensitivity, as cats are generally resistant to change.  But changing something as simple as bringing in a new toy or treat can do the trick!

I brought some baby food and a long soda fountain-type spoon (all-meat baby food without onion such as turkey or chicken, Gerbers is generally a good brand) to see if she would like that as a treat.  I also brought a long piece of string, as some cats really enjoy playing with it.  [FYI please never leave string around, as your cat may chew and swallow it.  Always supervise your pet when playing with them with a piece of string, and put it away safely when done.] 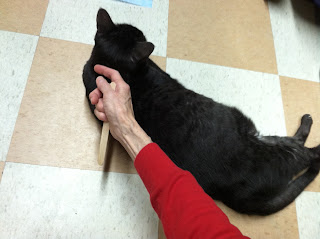 Sylvie was sitting on a shelf when I arrived.  First I fed her a bit of the baby food, which she liked.  But when I pulled out the piece of string, her face truly lit up.  She jumped off the shelf to come down on the floor and play.  We did this for quite a while.  I moved the string closer and closer to me, and she ended up sitting right next to me comfortably. 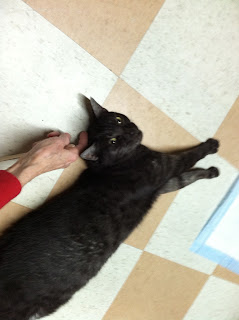 We did some TTouch there, first with a flat wooden craft stick that looks like a doctor's tongue depressor, and then directly with my hand.  I also gave her a few Temptation treats. 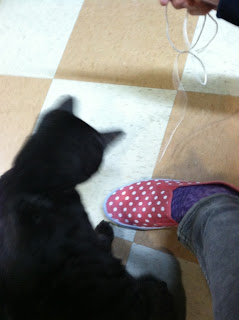 After we played, she settled right by me, resting her foot right on my foot.  The sweetness of the trust of that was just so powerful and moving. 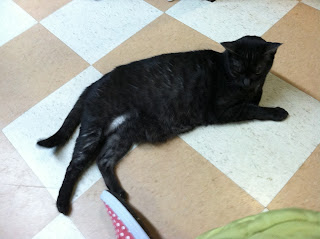 In the latest sessions with her, I have continued to present her with the string when I get there, and she usually jumps right down to play with me.  Her other new thing which is very sweet is that she likes to come down and sit right by my bag.  Part of that may well be that treats and toys come from that bag, but she also seems to feel safe sitting there, as she feels safe sitting next to me. 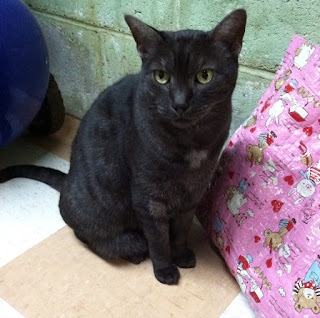 The other resident cat, Mama, often tries to join in, which is hard for Sylvie as she is not sure about Mama even though Mama is very gentle and sweet.  But when that happens I sit right in between them and that seems to work out well.  And it was interesting that the first time I brought the string, Mama sat off to the side and watched, as if she knew that Sylvie needed the time alone with me.

Just bringing this simple new toy started a whole new level of progress and comfort with Sylvie, which I am so pleased to see.  Her face and body posture are starting to be much more relaxed than they were.  She used to have a very pinched, pulled in expression on her face and that is starting to change.  Her eyes are more open and more relaxed. 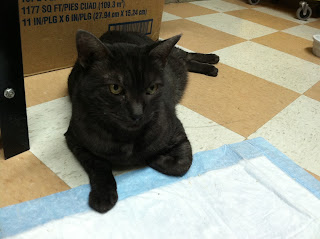 Other people in the clinic are noticing the progress, and are able to have more positive interactions with her.

It makes me smile to see her feeling better! And I know that the progress will continue.  And if things get static again, it is time to try something new:)

Thank you to the Clinic for all your love and care, and thank you Sylvie for trusting me.  Much love as always  xxoo
Posted by sarahsuricat at 2:05 PM No comments:

The Power of Quiet Connection

Hi folks, today I am referring you to Bideawee's site, where I have a blog post up.  I work with the kitties at Bideawee, and share about my experience there and about the work I do.  Thanks Bideawee! you are awesome and I am delighted to be there!