My Journey with Chloe: A Quiet, Strong Spirit 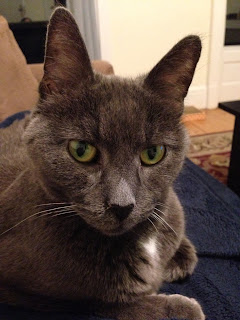 Chloe is a lovely cat with a quiet, internal energy.  Her brother Max, who I wrote about recently, has a much louder, bold presence.  However, she does have her own intensity, and a strength and power within her more quiet presence, as you can see by the photo above.  Chloe and Max are fourteen, have been together all their life, and have always been at odds with each other.  Chloe will growl at Max when he walks by.  They put up with each other, and they have each staked out territory for the most part, but in general, Max seems to irritate Chloe.  Apparently at times he deliberately gets in her face, so that doesn't help so much either :)
A ways back, Chloe began urinating outside the box, so her people, Debbie and Jonathan, took her to the vet to see if there was a medical reason behind this.  The vet found that there was a mass located near her bladder. 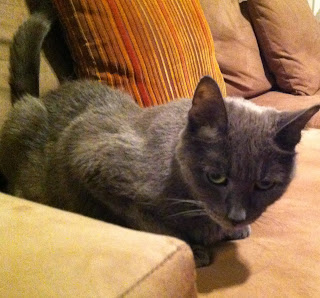 I had been working with Max for a few months when the mass was found in Chloe, and so at that point I began doing Reiki work with Chloe as well as Max.
It was interesting, one of the first things I noticed in starting to do energy work with Chloe was how her energy felt naturally much more inward, whereas Max's is much more outward - though of course when I first started working with Max, his energy was in a diminished state because he had been very sick.  But what I mean is difference in the natural state of their energy.  Perhaps that difference, plus the fact that they are both so strong in their individuality, is what is at the source of their conflict.
If Max is in a wandering mode when I get there, I will start with Chloe or vice versa.
Chloe's usual hanging out spot when I am there is in the living room, either on the couch or the coffee table.  Sometimes in the midst of a session she will go to eat, so when that happens I may sit on a stool near her, sending energy.  At various points during a session, she may come towards me for TTouches.  I do a little at a time with her, and with the Reiki, I always have my hands a short distance away from her, as I think that the energy would be too intense if I were to do hands-on with her.
I use a lot of visualization with her, visualizing the mass dissolving, visualizing white light traveling through her body, healing.  I always tell the animals to only take as much or as little Reiki as they wish, so they feel that I am not forcing the energy on them.  I am there for them, I am there to help them, and work with them as I am guided by them.
Very often, during a session, a word or phrase will come to me, as if it were a word blowing on a breeze - a feeling-type of word.  I often feel I am in a daydream-type state during a Reiki session, so I feel I am picking up things that come to me on a deeper level.  In the midst of my Reiki session with Chloe last week, the word "acceptance" came to mind.  I was thinking, maybe if it is possible for her to accept who Max is, rather than wishing he were different, then something could start to shift in their relationship.
I am not saying that Chloe is the reason for their conflict, it does feel like it is chemistry, there certainly are many human brothers and sisters who don't get along with each other.  As of this post, Chloe is still growling at Max.  But of course, this type of shift will take time, if it indeed possible after all these years. 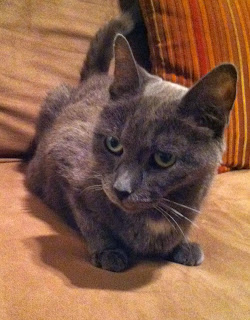 What Chloe could change is the way she reacts to Max, and discovering that possibility can be empowering.  And in my work with her, I will incorporate visualization of a more positive reaction to Max, simply starting with a picture of her having no reaction.  I do think it is positive that recently both cats began hanging out in the living room again at the same time.  There were months after Max's hospitalization where he was not hanging out in the living room - but I think a large part of him coming back into the living room had to do with him feeling so much better and wanting more connection with his people.
As for how Chloe is reacting to TTouch and Reiki, I can feel her trusting me more and more each time, and being comfortable with closer contact.
When I first came to work with Max, I tried a few TTouches with Chloe and she was only comfortable with a few TTouches before she signaled that it was enough!
But now she will come towards me for TTouches, which I still do very gently, and primarily with the back of my hand, as that is less intense than using the front surfaces of my hand.  And I let her guide how much contact she would like to have, closely watching her body language.  I will do less rather than push for more.
After a short session of TTouches, I transition into the Reiki part of the session, starting with my hands maybe 6 inches away.  Usually at this point she is on the couch with me.  Lately, I can see her recognition of the energy, and she gets very still, taking it in.  Last session she actually settled right next to me for a good while.
She will settle until she feels a bit more distance, and then she will go on the coffee table and settle there.  I continue sending the energy, but from a bit further away.  When she is ready to be closer to me again, she comes on the couch again.  She may do this two or three times during the session.  Sometimes I will see her looking at me, as though she is kind of adjusting herself, maybe feeling something different because of the Reiki energy.
Recently I began studying about color therapy.  Sometimes I will send the essence of a color while I am sending the Reiki energy, following my intuition about what is needed for that day or that time - I may use a couple of different colors during the session.  Last session, I used green and purple.  Initially I was sending green to the heart chakra (green is the color associated with the heart chakra), as I feel that because of her shy nature, some opening and balancing in that area will benefit her and help her confidence. 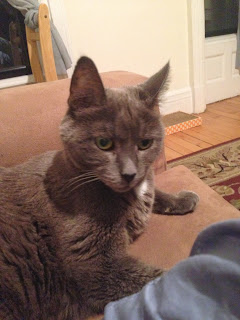 Later on in the session, at one point she became alerted by a few sounds (the sound of footsteps running in another apartment, a doorbell ringing), and I began to send purple through her forehead and down through her body. It did seem to calm her, her eyes softened and her body began to relax.  Purple has to do with calming the emotions, restoring balance.  I feel that as I continue to work with her, she will continue to feel more and more at ease with me and she will absorb the energy on a deeper and deeper level.
Her appetite has been good, seems to be a bit better since I first started working with her, and (crossing fingers), she has been peeing in the box for about the past month.  What has made a huge difference in her litter box issue has been to keep the box and surrounding area super-clean.  So that is all good!
Thank you Chloe - you are a gentle, dear soul, and I look forward to continuing to work with you (and Max)! As always, I learn so much from the animals every day.  By being still and quiet, and listening and feeling, we can learn so much from them. xo
Posted by sarahsuricat at 8:18 AM No comments: