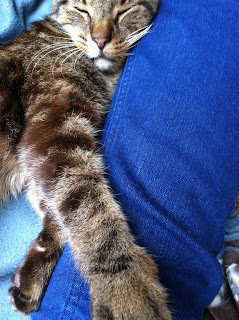 I have been even busier than usual, so it's been hard to squeeze in time to write!

I had been out of town for about a week after my first few sessions with him and at that point was not sure whether he would pass while I was gone, especially as his person Suzanne had texted me that he was not eating much while I was gone.

Fortunately Monk was here on earth and ready to resume his sessions when I returned.  I have been working with him at least several times a week, sometimes more.  Since my previous post, his energy and appetite have continued to improve, which is great.  He is still a frail cat, but his life force energy feels so much stronger since I began to work with him.  And he really seems to enjoy his food, which is a huge change.  I am so happy that Suzanne is able to have more time with him.  She and Monk are so deeply connected, and have such a sweet bond with each other.

It also is interesting to see how things are evolving with his general habits.  When I first began to work with him, he wanted to be out on the terrace 24/7, but in the couple of weeks or so he has been content to be inside more of the time.  Of course, some of that is influenced by the weather, as we have been having some tropical-like rainstorms, but his need to be outside doesn't seem urgent as it was with him initially.

He seems to really welcome my visits, and settles into the Reiki sessions with me very quickly now.  Sometimes we are completely hands-on, other times I need to have my hands maybe about 6 inches or sometimes more off his body.  I always follow his cue as to what he would like.  Quite often he will settle right in my lap or with his head resting on my leg or hand.  It feels that as we go, his body trusts me more and more, so that the energy is absorbed in an increasingly deep way.

During a Reiki session, when things are really flowing, it feels as if my energy merges with that of the animal.  Sometimes it is as though my hands are actually inside of the animal. 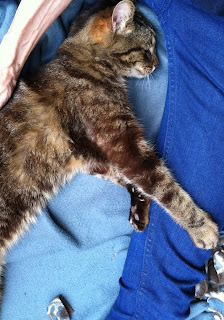 I use a lot of positive visualization at the same time I am offering him Reiki energy.  Lately, it seems his skin is irritated or itchy, as he is pulling off chunks of fur.  Apparently this is something that can happen with cats with Chronic Renal Failure.  So I imagine cool blue energy soothing his body.  I imagine I'm inside of his skin, and am feeling comfortable inside of the skin, feeling a coolness soothing from the head down to the feet.  I imagine relaxation, and see his fur growing back in the areas where he has pulled the fur off. 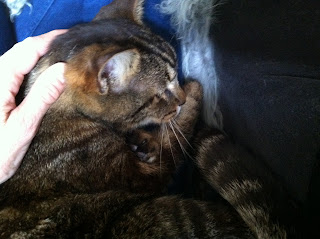 I also do TTouches with him which feel like they should be soothing.  I do little hair slides going down his body, using a light touch.  I also do abalone TTouches, which are TTouches using the whole hand, to try to calm the whole body. 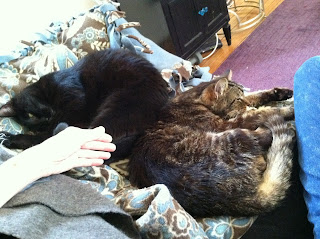 Another interesting aspect of working inside with Monk is that his cat "sister" Jade is around him more and Reiki seems to be helping them to have some peaceful moments of connection.  Often Jade will curl up right next to where we are working. 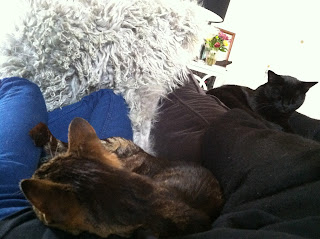 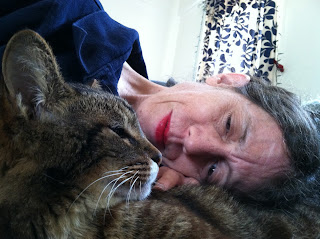 There is something so special about my time with Monk.  He is a dear, gentle little soul.  I know that I am traveling with him on this last part of his road on earth, realizing that we don't know how short or long it will be.  I appreciate these sweet times of love and connection with him.  When I work with him I feel there is light all around us, that we are sharing our hearts.  I am so honored to have these moments with this sweet being.
Posted by sarahsuricat at 12:08 PM No comments: