From Fearful and Hiding to Joyful Cuddling and Playing: Simon and Caleb 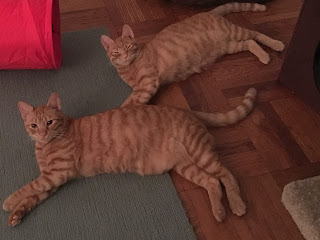 It is an extra-special pleasure when I am able to continue to work with cats who I have worked with in a shelter after they have been adopted into a loving home.  And in this case, it was so beautiful to witness the transformation of these two dear boys from being shy and a bit scared of people to being so open and loving.

When I first met these two young kitties, who I affectionately call "the orange boys", it was at Bideawee shelter, and their names were Ticky and Tocky.  In working with them, I could tell that they were shy, but so sweet, and they were so connected with each other, I was hoping they would go to a home together.   The bigger boy, who would later be named Simon, was especially shy, but was receptive to being petted when nestled in a cozy place.  Caleb started out shy, but once you started to make contact with him, he came forward pretty readily, rubbing on my hand.

These little boys could not have had better fortune! They ended up going home with Brigid, a friend and client of my friend Eileen, who is a wonderful animal communicator, and has done cat sitting for years for Brigid.  A couple of weeks or so after their adoption, Eileen connected Brigid to me, and I began doing sessions with them in their new home.

Brigid had been starting to let the boys have the run of the apartment, not realizing that this was too overwhelming for them, especially for Simon, so I had her seclude them in the bedroom as she had initially.  Whenever introducing shy cats to a new place, it is important to keep them in one small space for a good while, til they are comfortable in that space, then let them slowly expand their territory to include another room, etc.  A bathroom is good for the first space, especially if the cat is very shy, then a bedroom might be next. 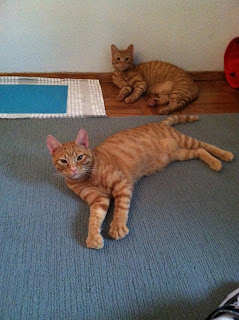 Caleb was still a bit shy initially, but soon after touching him, he would register that he enjoyed the contact, and he would start responding to it.  So I showed Brigid how to do some of the TTouches, and encouraged her to make contact with him frequently, to keep reminding him that he liked touch.

Simon was more shy.  And sometimes when feeling very shy, he would also start nervously grooming.  At times, though, he would settle in a place enough to touch him, so it was a matter of being patient and waiting til he settled pretty well in a place, like on the bed, and then gradually approach him, perhaps stroking him with the stick end of a stick toy first.  In one of my first sessions, it was not until the end of the session that he really settled, but it was so worth being patient, because when I approached him, he really settled into the TTouches and started responding to him.  I had Brigid come and sit next to me and do exactly what I was doing (gentle TTouches on the head) so that she could experience it as well and have the confidence that it could happen with the two of them. Such a beautiful moment! 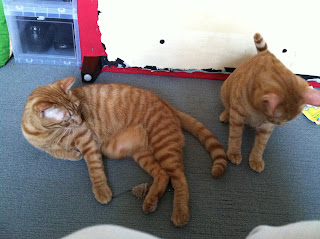 Simon tended to hide under things or in edges or corners of the room.  I had Brigid block under the bed as much as possible.  But she needed to provide him with hidey spaces which were more accessible, so I had her do that at the same time, so Simon would not feel he had no place to hide.  A simple cardboard box with a towel or something cozy inside can do. I also suggested that a tunnel could be a good idea, or cozy hidey beds, and so she got these items as well.  Simon still seemed to find underneath places to hide, like under a chair, but at least these were more accessible than under the bed. 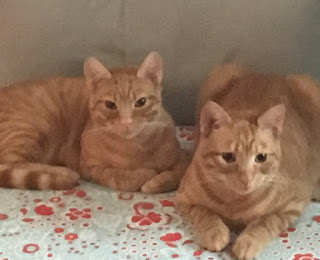 And each week, more progress was being made.  Caleb got friendlier and friendlier, really turning into a lap cat, and Brigid slowly was able to touch Simon more. And of course, the boys are just the best of buddies, and are seen curling up with each other or playing together all the time. 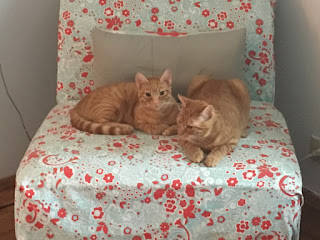 The boys both love to play, so one thing that worked really well with Simon was to play with him gently with a string toy, and then bring the toy closer to me, so he would need to come in closer proximity to me. At times he would end up resting not too far from where I was.   So I would be able to stroke him a couple of times with the stick end of the toy.  I generally don't mix play energy with a petting-type thing, but in Simon's case this combination worked well.  It helped encourage Simon to come nearby in a non-threatening way.  I also told Brigid to simply sit quietly with them not even trying to touch them, just letting them get used to being near her.  One session I took her through a guided meditation that she could share with the boys. Following is a version of it.  This is similar to Reiki, but is something that anyone can do, whether trained in Reiki or not.

I incorporated Reiki into our sessions.  Usually I let the Reiki flow throughout the session, no matter what else we might be doing, but sometimes I spent a certain amount of time with just a dedicated Reiki session.  The boys are young, so sometimes they would take a while to settle into the energy, or would relax for a while, then play for a while, etc.  But that is all good.  Reiki will go where it is needed.

As we continued to work, I saw Simon's nervous grooming less and less.

I also made flower remedies for the boys for them to take internally as well as to be sprayed in the environment.  The essences I used helped to de-stress them and to let go of some of their fears. 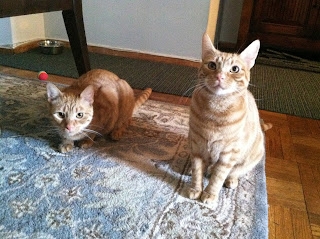 OK Sarah, where are the treats?
In the beginning I tried to work a bit with treats with the boys, but it took a while for them to be comfortable with this.  However, after their general anxiety lessened, and we experimented with a variety of treats, then they realized that they loved the treats, and loved them enough to be able to eat them around us.

So...I taught Brigid some basic clicker training, which turned out to be a great success with both of the boys.  Using the clicker and treats, we got the boys used to coming to us, and really wanting to come closer to us.  First you just click and treat to get them used to the association.  Then you can get them to come to a target.  A natural one is to offer your finger or the stick end of a stick toy, and usually naturally the cat will touch its nose to it.  Then you can use the target to help them get closer and closer to you, or to do other fun tricks.

Once the boys were comfortable with the clicker and treats, we started to pet them while they were taking the treats.  I remember one session when it seemed like things really "clicked" for Simon with this exercise, and he seemed to start enjoying the pets as much as the treats, leaning into my hand.  So beautiful to see!  The real breakthrough was to see Simon seeking out the touch and really enjoying it.

I also showed her how to help the boys start making friends with their carriers, by working with the clicker and tossing treats for them to retrieve from inside the carriers.

As we continued working with the boys over a few months, they kept progressing and progressing, so I kept adding in more things to do with them.  Now that Brigid could touch them both more, I taught her more of the TTouches so that she could share them with the boys. 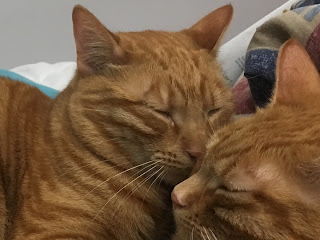 Eventually, it was time for Brigid to just take over the process of working with them on her own, and she has done a wonderful job.  I have not seen them for a few months now, and they continue to progress.  I am so happy with how far they have been able to come, and that they continue to learn and grow with Brigid with all the love that she surrounds them with, and that they give back to her as well. 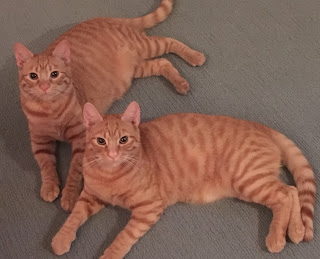 And, shy Simon is not so shy any more! Simon now will come on her lap at times, and is doing just great, as is dear Caleb! And, both cats are very friendly with Eileen, who comes to cat sit them whenever Brigid is away. The following photo was taken by Eileen recently.  This is Simon being sooo relaxed after playing with Eileen! 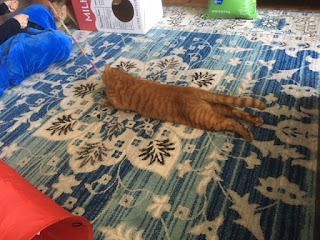 Patience, love, persistence, trying different tools, not giving up.  Trying something different if one thing is not working so well.  When working with shy cats, something doesn't work one day but might work another day, and visa versa.  Keep your mind open, and you may think of a variation on what you are trying that will work better.  The cats have so much to teach us - we just need to quiet our minds enough so we can hear them:)

I wanted to say a big thank you to Brigid and the orange boys.  I have learned so much from you, and am so happy that you all are doing so well.  Thank you, Brigid, for adopting these sweet souls and for all your patience, love and care.  And for providing most of the lovely pics which are in this blogpost:) And thank you to Eileen, and of course to Bideawee, for helping make this adventure possible:)

PS. I encourage everyone with a shy, fearful or feral cat to check my recommendations for acclimating a shy cat on my website.  There are some more in-depth descriptions and links there that could be helpful for you and your cat(s).