Reiki, Debono Moves and TTouch with Deuce: Gentle Work with a Gentle Soul 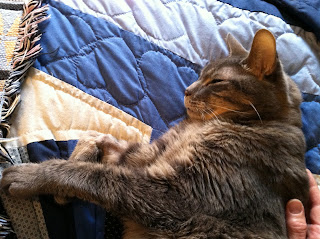 Deuce is a beautiful, sweet gray tabby who I have worked with weekly for about four years (I now also work with his dear brother Gruffy too).  Originally I was called to help Deuce because of his arthritis, and now he also has some digestive issues.  The work that I do is helpful on many levels, so it should help him to feel as balanced as he can be in his situation.
Deuce is a gentle and open being, and he is extremely receptive to the work that I do.  Each session feels like we share a very deep meditation together. 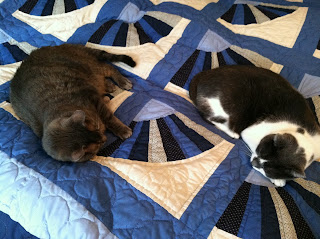 Deuce with Gruffy
I have mostly done Reiki with Deuce during the time I have worked with him, but I also incorporate TTouch into our sessions, and, more recently, have begun incorporating Debono Moves (a gentle technique for animals based on Feldenkrais work, developed by Mary Debono) into our sessions.  Debono Moves helps with balance on both physical and emotional levels, and can particularly help animals with physical discomfort and trouble with mobility.  Among other things, Debono Moves gives gentle suggestions to the body about how it may be able to feel more comfortable, move or rest more comfortably, and feel supported.  In this post, the work I describe doing with his feet and legs is from what I have learned about Debono Moves.
Deuce has been having more physical trouble lately, so I am especially careful to be mindful of his sensitivity when working with him.  In the past, he has been really comfortable with Reiki hands-on, but more recently, I find myself working with him with my hands slightly off him, as I can tell it may feel too intense to him to do hands-on.  However, yesterday he was up for more contact, so I thought, let's see what can happen. . . 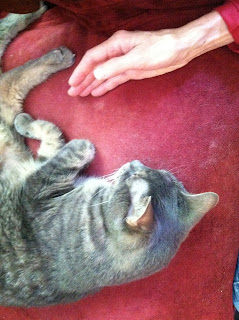 He was laying on his favorite chair when I arrived.  I sit on a low stool right next to the chair.  I started with my hands slightly off him, letting the Reiki flow. Right away he started purring.  He rubbed his face into my hand and made himself comfortable.  I felt him taking the energy in, and we became one, sharing the light and energy of Reiki.  We stayed there for a good long while, very peaceful.
He was curled around in a snail-like position as you see below.  At times, I gently placed my hands and arms around his body a bit, curving around him.  Just resting there at first, and feeling like I was giving him gentle support.  In my mind I would think of giving the slightest pressure (rather than actually really "doing" anything), as I thought of supporting him, then would gently release.  Then I would take my hands slightly off again and let the Reiki flow. 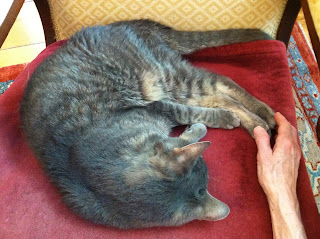 He seemed to want to rest his hind legs on my arm or hand.  I started giving him just a slight feeling of support on his hind legs, and then releasing.  I had a picture in my mind that he was standing up.  I would slightly touch one leg, then the other, picturing that he was putting a leg forward, then the other.
Keep in mind that these movements are barely perceptible, and extremely slow.  A video of them would look almost like nothing was happening, yet I felt a lot was happening. 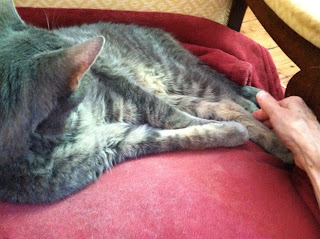 I put my hand slightly under both his hind paws.  It felt like he started giving his weight to me through his paws there, like he had the sensation of standing even though he was laying on his side.  I would put a slight pressure under one foot, then the other, imagining he was taking steps.  At times I would stay still with my hand under both feet, imagining him standing. Again, I felt that HE sensed this and was responding to it.
I also did some gentle TTouches around the hind legs and feet to additionally help give some awareness there.
I continued to let Reiki flow the entire time, and he was extremely relaxed. 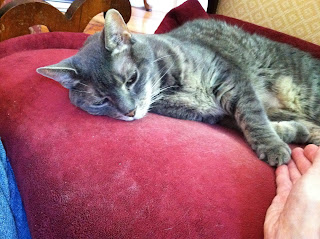 Then I gradually started to do the same thing with his front feet.  Usually he does not like to have his front feet touched at all, but he was so relaxed that he was ok with it.  And I think that starting out with the hind feet, where he is more comfortable, gave him a hint that this same movement may be comfortable on his front feet.  From what I understand, his arthritis is primarily concentrated around his shoulders, so I am sure his front feet are especially sensitive. Again, I just lightly touched one under one front foot, then the other.  Like I was just letting my hand be there for him to "stand" on.
He started pressing into my hand a bit with his feet too.  So interesting! 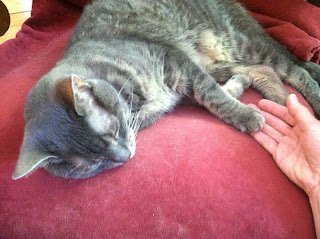 After working very slowly this way for a while, I let it go and just let the Reiki flow for a while.  I started to do a few gentle ribcage lifts, but could see that he had enough and just wanted to take in the peaceful Reiki energy for a while longer.  He settled into the peaceful energy flow. He was purring and I felt him so peaceful and comfortable.  Sometimes I feel my hands so connected with him that it is hard to end the session, even though I know I have been there quite a long time:)
After a while of enjoying the quiet flow with him, I gently thanked him and ended the session.
Thank you so much, Deucie!  I love you and always love working with you.  Look forward to seeing you soon!
Posted by sarahsuricat at 8:07 PM 2 comments: