TTouch and Reiki at Bideawee: The Journey and Transformation of Baby Tommy (and a bit about his friend Miu Miu) 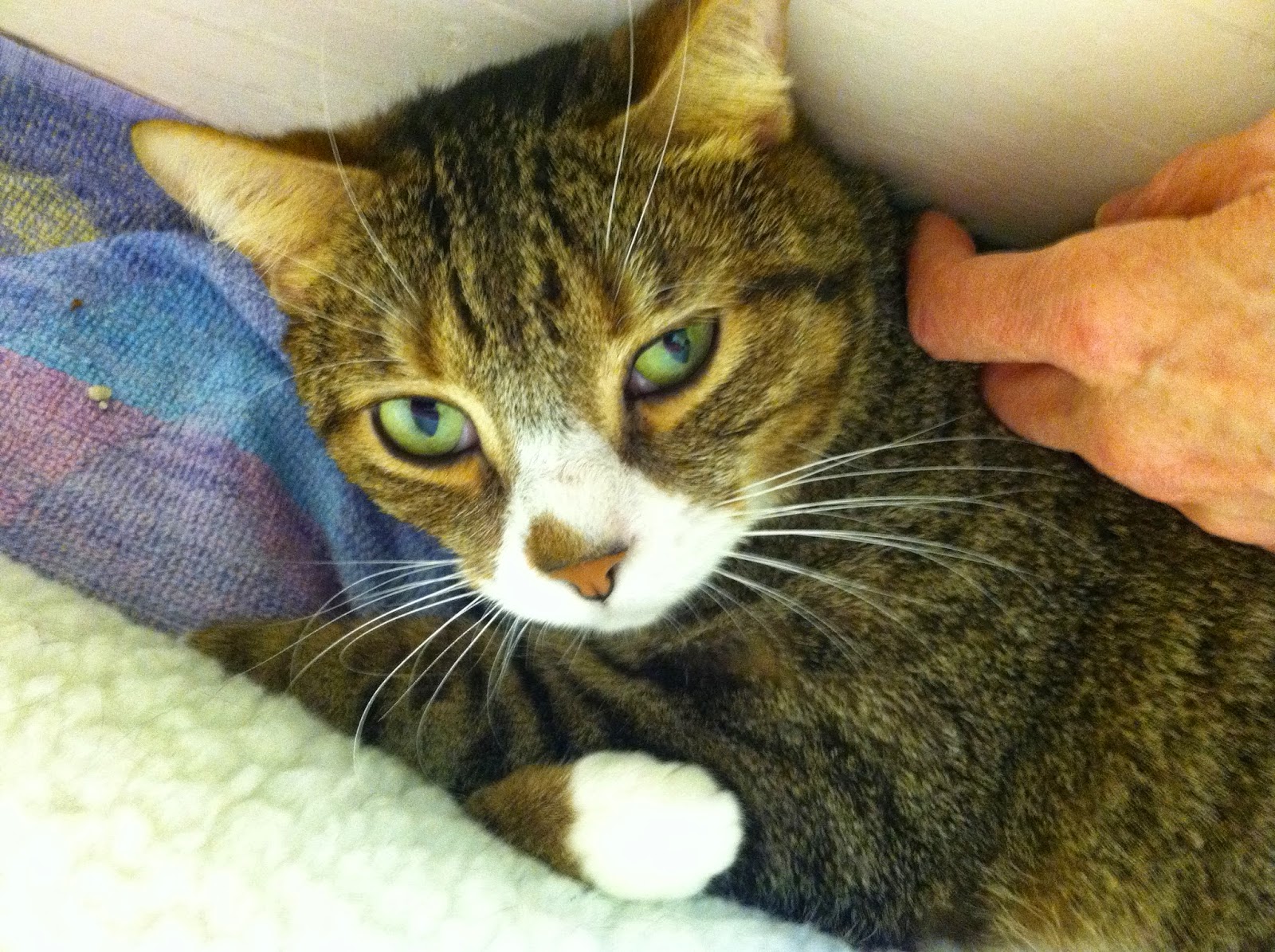 Baby Tommy (also known as Beau) was a terrified kitty when I first met him in the downstairs receiving area at Bideawee. He was hiding inside of a cavelike bed, and would hiss and swat when the cage opened.  I was not able to get a decent photo of him in the beginning as he was mostly hidden when I first started working with him.  But he looked like such a different cat than the one you see in these pictures here.  He was so frightened and pulled in and hunkered down.  It was as if his true self was covered with layers of fear.
I started out by sending him Reiki just sitting next to his cage.  I did this for a while, and could see that this was helping him to relax.  Having this distance, and just making contact with the energy can help to establish a connection that is very soothing and non-threatening. 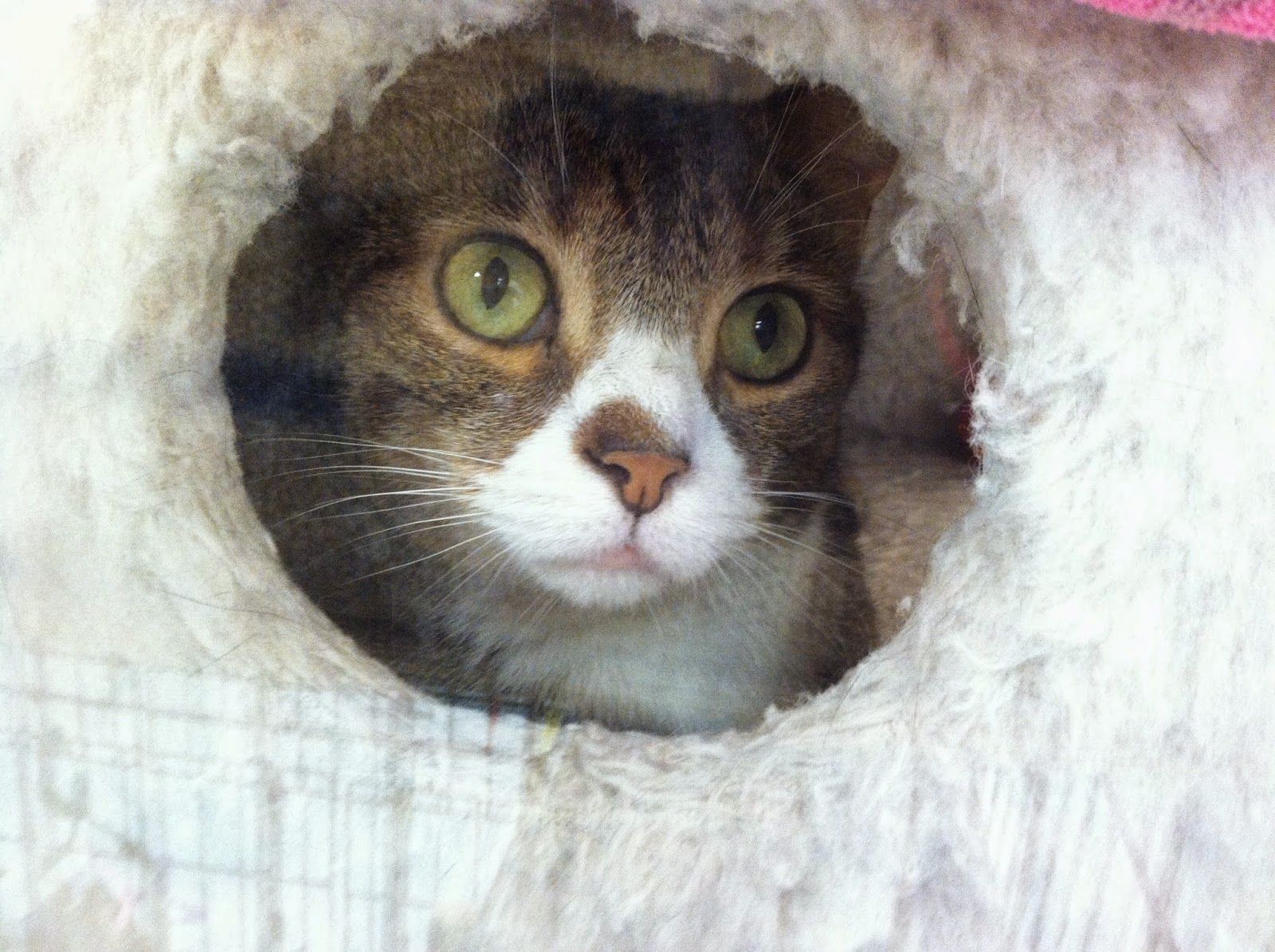 After a couple of sessions, I decided to try making contact with him using a paintbrush. At this point he was inside a cavelike bed which was turned to the side so it was hard to see him.  I very carefully turned it a bit so that I could see enough of him to see his response.  At first he hissed, but as I began to do some of the circular TTouches on his forehead, he began to calm.  I just did a short time at first, and he began settling into a longer time after a while.  As I worked, even though he was hard to see, I could see and feel him becoming more relaxed.
Shortly after I began working with the paintbrush, the cave-bed was substituted with a metal mesh box which was partially covered with a cloth.  The mesh enabled me to see more of him, and he was still able to feel safe as he was enclosed.  He was still scared and would start out with a hiss, but was very responsive to the TTouches on his head with the paintbrush.  His body posture would settle as I worked with him. As time went on, I was able to TTouch him around his face, and a bit on his body as well.

Once he became more comfortable with this, I began to work my hand down the paintbrush and do a few TTouch circles on his forehead with the back of one finger, actually the fingernail was what was in contact with him.  He began to respond to this more every time, relaxing his body as I worked with him.  Pretty soon I could approach him and TTouch him directly with my hand.  He was still cautious and wanted to remain near the back of the cage, but he was more and more comfortable with me each time I worked with him.  Reiki was also flowing as I was working with him, helping to create a sense of calm. 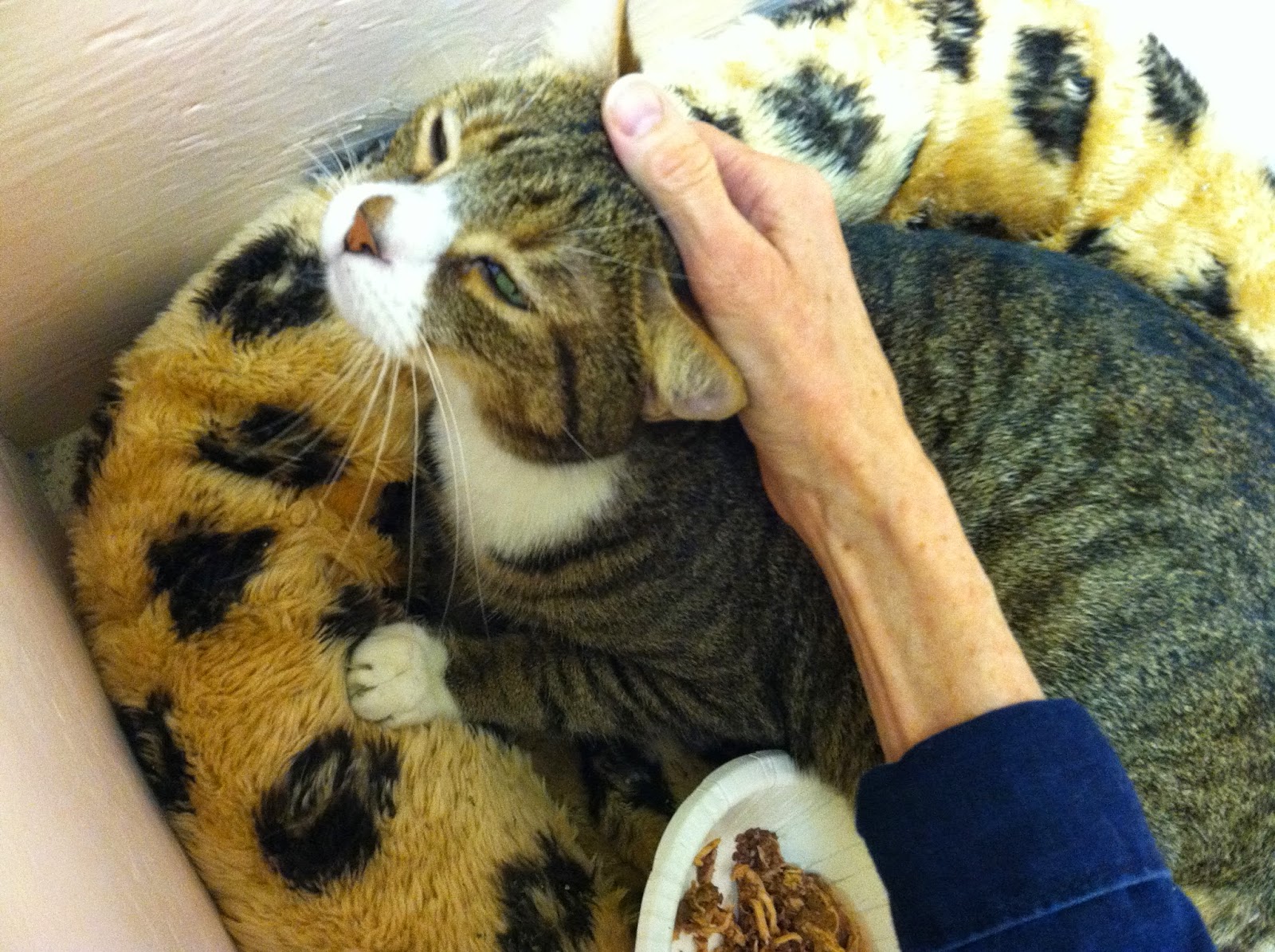 Meanwhile, there was another shy cat in the receiving area named Miu Miu, who had come in with kittens who were adopted quickly, but she was initially quite wary of people so needed more socialization. Miu Miu connected very strongly with me and, I think, with Baby Tommy.  Her cage was up a level and one over from his, and when I worked with him, she would sit at the front of her cage, look at us and purr.  So sweet!! 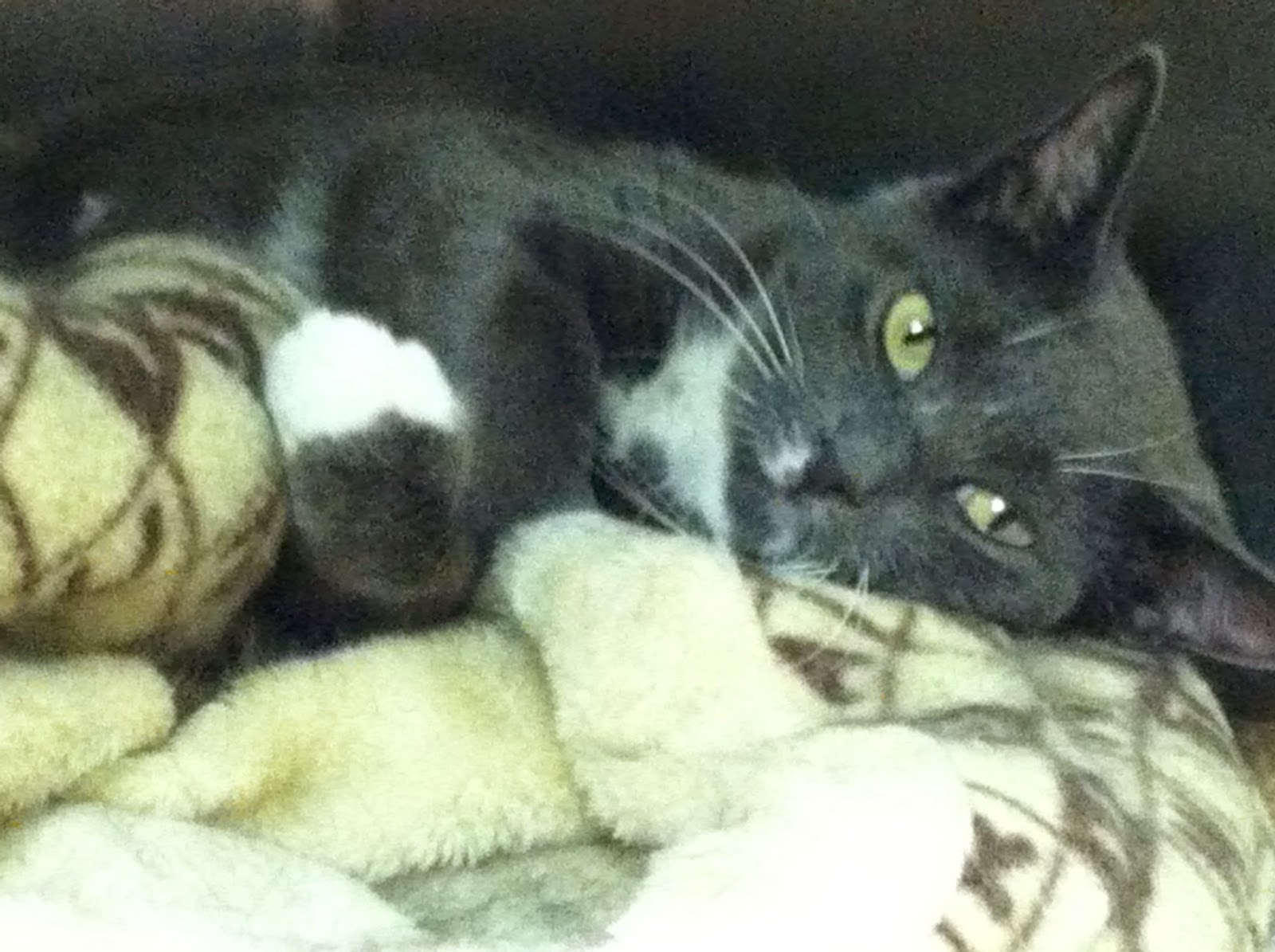 Above: Miu Miu
I was working with her a lot as well and making huge progress with her - first by doing TTouches with her with a paintbrush, to give her some space, and later I could TTouch her directly with my hands. 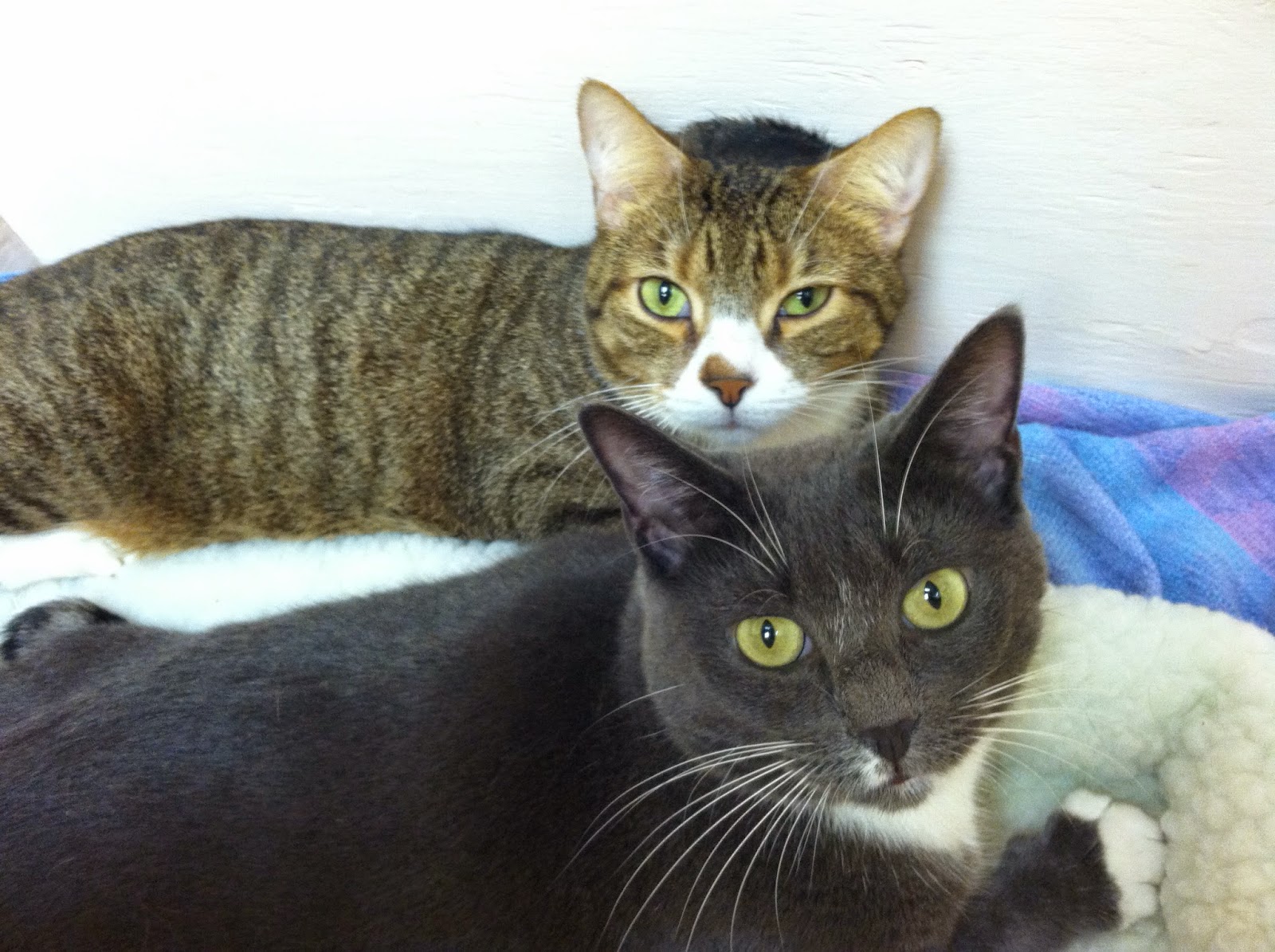 Above:  Baby Tommy and Miu Miu
After some time in the receiving area, Baby Tommy and Miu Miu were both moved to a resort with several other low-key, mellow cats and this environment helped them both to jump ahead to a whole other level of comfort.  Though they both were hiding initially cuddled together with another cat Zoe inside the litter bench, Miu Miu soon started coming out to explore and was more confident and friendly every day. 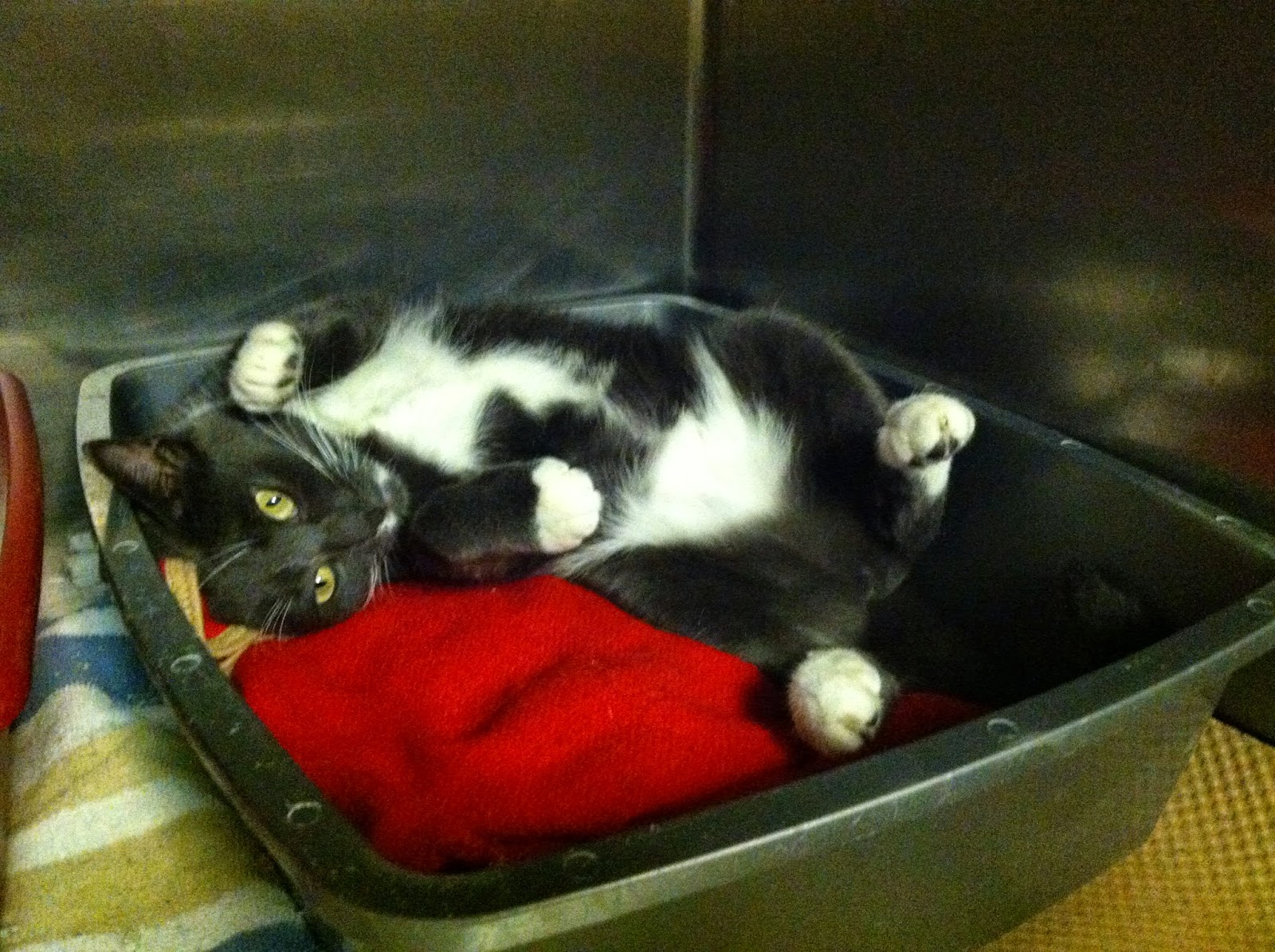 Above: Miu Miu
Her sweet, funny personality came forth more and more, and it wasn't too long before she went home. 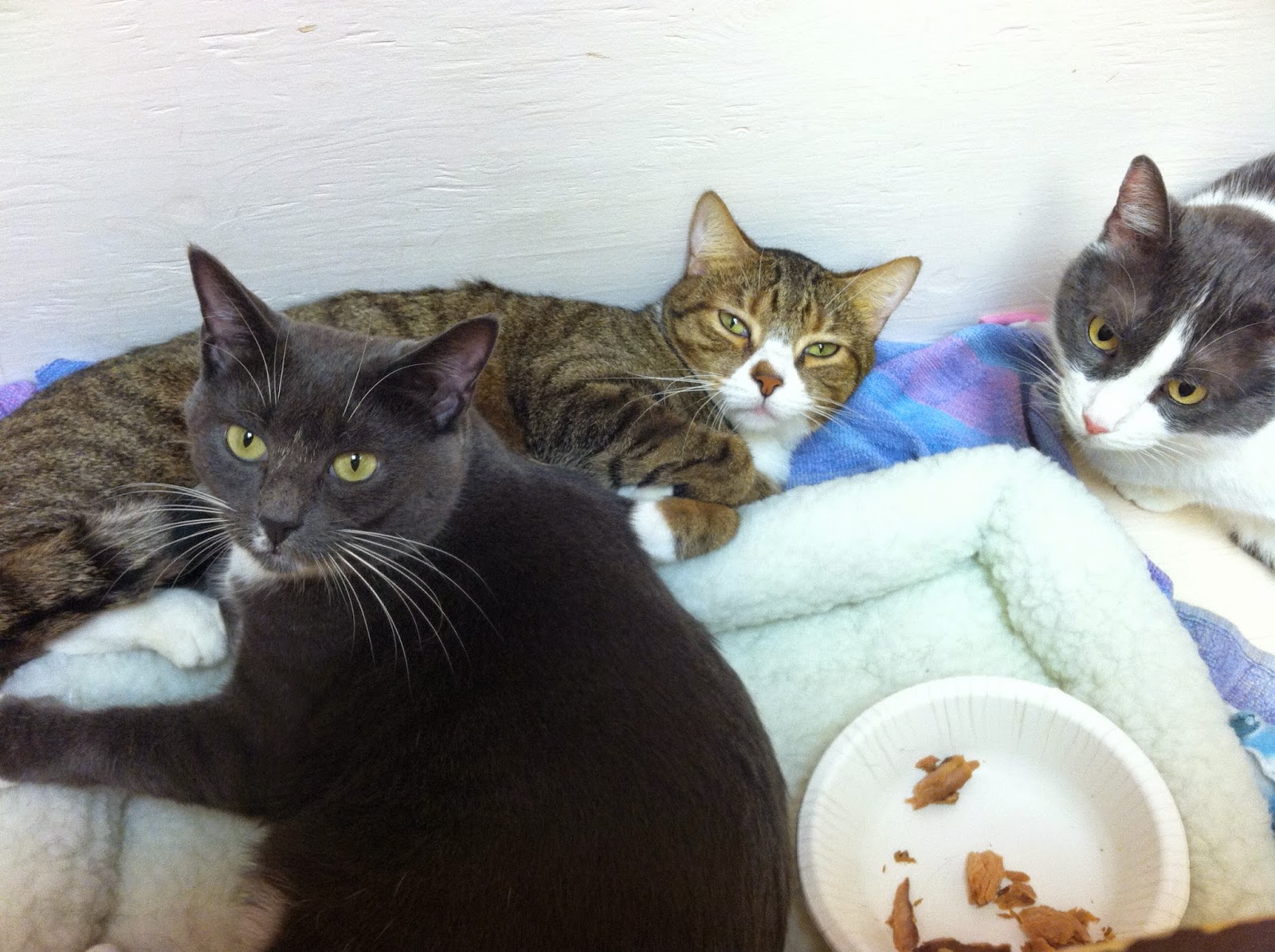 Above:  Miu Miu, Baby Tommy and Zoe
Baby Tommy was still cautious with others, hissing when the litter bench was opened, but he remembered me from when he was downstairs and he soon was nuzzling into my hand, licking it and purring. 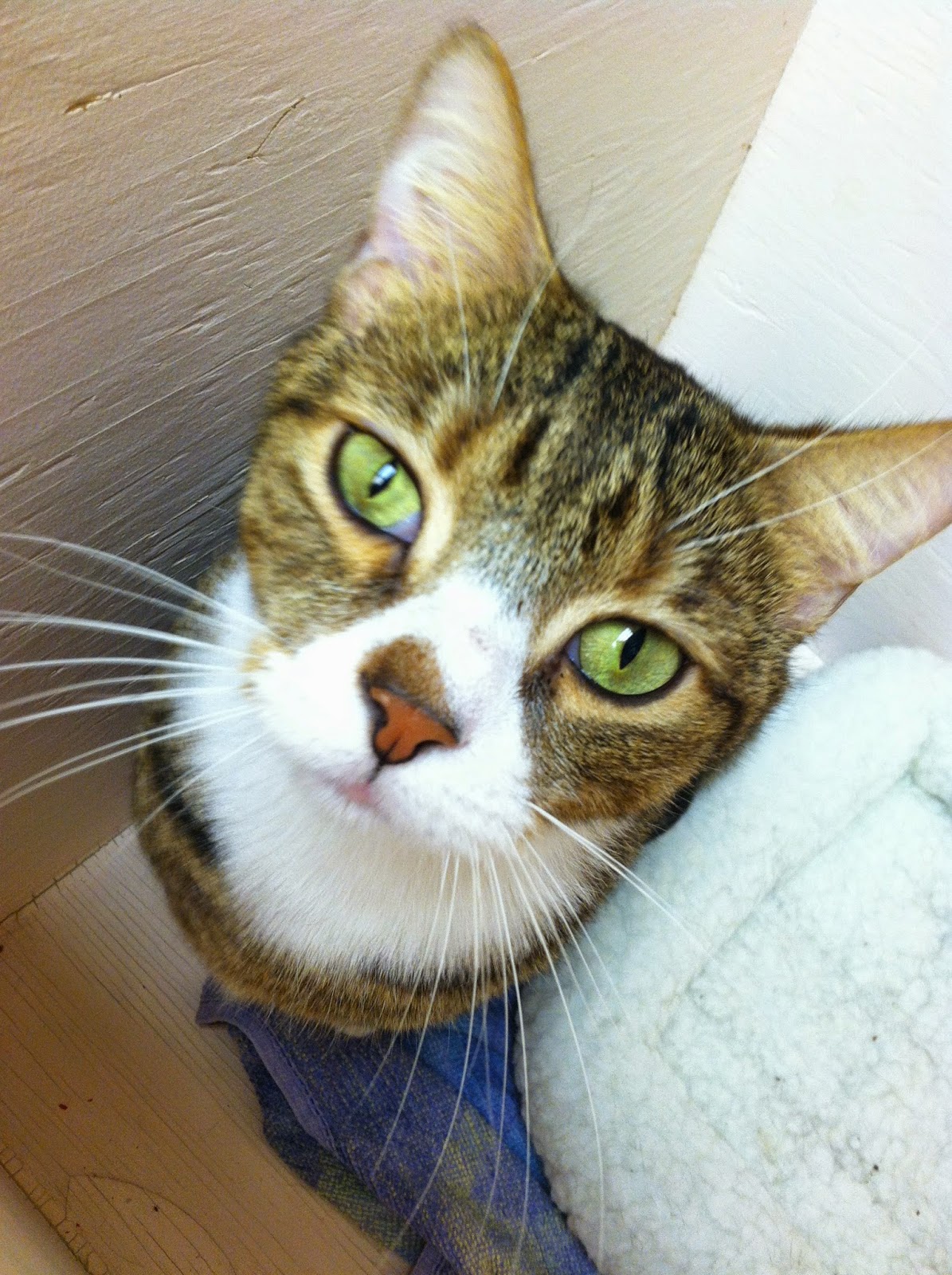 His eyes began to be more relaxed and open than I had ever seen them.
Each time I came to work with him, he was more and more trusting, and soon he began to come out of the litter bench when he saw me, rubbing into my hand.  He recognized me, and recognized my energy.  He was becoming more comfortable with others as well, especially some of the regular volunteers, and he began to be comfortable enough to be petted by them and to play with them.
It really was lovely to see his whole demeanor change from when he was in the receiving area, so scared.  He is such a beautiful cat, and he looked even more beautiful as he came further and further out of his shell.
He still could get timid with too much activity, but in general, his face and body were so much more relaxed, and since he was so comfortable with other cats, having his kitty friends around him helped him to feel more comfortable as well.  He would come up to any new cat who arrived in the resort and would want to be friends with them.
Tommy was comfortable at this point with me doing TTouches around his belly area, so I decided to see how he felt about being gently picked up.  I sat on a low stool, and first just picked him up a bit off the ground, then placed him back down and did TTouches with him.  We did this a few times, and then I picked him up and put him in my lap, then started doing hair slides and TTouches with him right away to help him be comfortable. 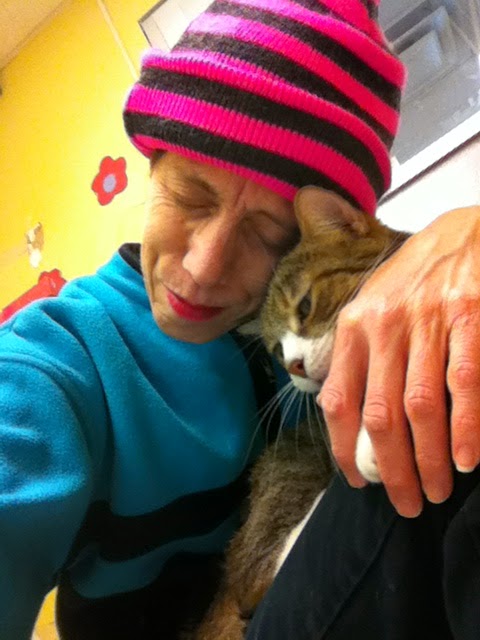 Soon he was settled in my lap, where I did some Reiki and TTouch with him as well.  It was such a moving experience to feel him so comfortable being so close to me.  He was so accustomed to me doing the TTouches with him that at this point he was even comfortable with me touching his paws and around his mouth.  He is such a gentle soul, and it was beautiful to see his sweet, gentle personality come forth more and more.
And there is a special kind of bond that forms through Reiki and TTouch, especially when I work with an animal for quite a while and I see them go through such a transformation.  These are both very gentle, yet very deep ways of connecting with an animal.  It is a very deep spiritual connection, a connection beyond time and space.  A connection of the heart, of the mind, of the spirit.  These are some of the most precious moments imaginable, just being there in the moment with an animal, experiencing the pure love and trust in that moment. 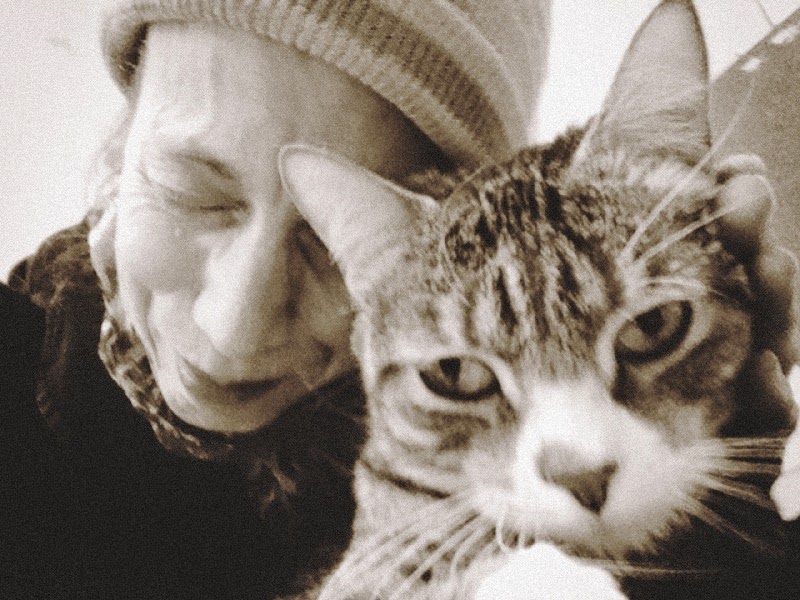 About a month ago, a woman who had previously adopted a cat from Bideawee came in looking for a friend for her cat and fell in love with him, so she took him into her loving home.  It was hard to say goodbye to dear Baby Tommy, but I was so glad that he was going home.  I wish him well, and know that he is in a special place in my heart always.  Thank you little Tommy, for teaching me and for reminding me about patience, slowing down, and enjoying the beauty of the moment.  xoxox 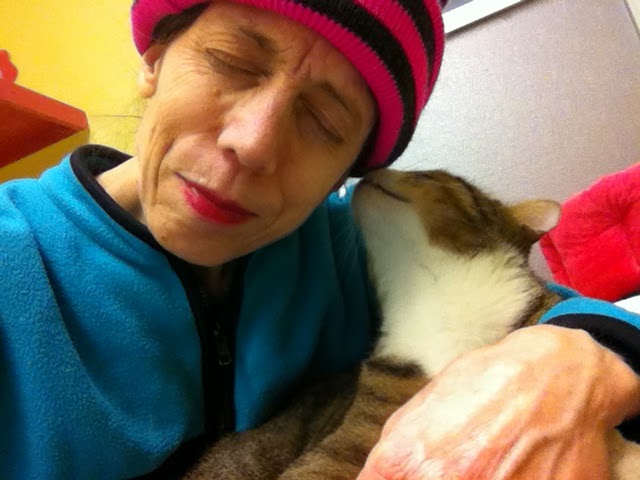