Riding the Ups and Downs with Mr. Ji 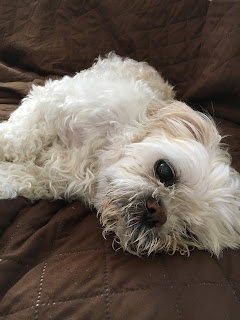 I have been working with Mr. Ji for some weeks now, and he has been responding so well.

Mr. Ji is a delightful senior Shitzu, a little dog with a big spirit.  He has musculoskeletal issues, apparently spinal stenosis.  He has some feeling in his back legs but they cannot support him, so Niseema (Mr. Ji's amazing person) has a customized cart for him which helps him get around very well.  He tends to twist to one side, and has a lot of tension in his upper body because it is working very hard to help the rest of his body get around.

But when I arrived at Niseema and Mr. Ji's place the week before last, he did not look good.  He was having spasms and seemed very uncomfortable.  Niseema said the trouble had started yesterday.

I sat down near him and set my intent to create as quiet and calm a space as I could for both Mr. Ji and Niseema.

As Mr. Ji was very sensitive, I kept my hands a short distance away from him for Reiki.  I started to let the energy flow, and pictured a healing bubble around us.  Niseema sat down and held Mr. Ji to help him feel more at ease as well.  If Mr. Ji cannot get comfortable on the couch, Niseema will hold him and usually he settles down.

As I continued, I slowly started to see Mr. Ji show some signs he was feeling more comfortable.

And then, Niseema began to do some slow TTouches down Mr. Ji's back.  I could see another level of relaxation begin to happen.

By the end of the session, Mr. Ji was definitely much more at ease.  And I was so happy to hear from Niseema later on that Mr. Ji seemed to have turned a corner - after the session he was more comfortable walking, and then he went to the vet for a cold laser treatment, which helped him feel even better.

This past week when I went to see him, I could see he was so much better, he had a lively energy to him and it felt like light was around him.  So beautiful to see. 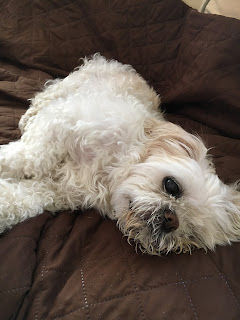 This time, he was comfortable with my hands on. Which showed me he was more comfortable altogether.

Niseema held him for most of the session.  I began with Reiki with my hands around his lower back, then did some Debono Moves muscle lifts going down one side of his back, then the other.  Debono Moves is a very gentle modality, developed by Mary Debono, that is based on Feldenkrais work, as is TTouch, but I think it is even more subtle.  I did the muscle lifts extremely slowly, with the image that I was supporting his back, that he could breathe into my hands.  I felt him getting more and more comfortable as I worked.

After that, I had my hands on either side of his lower back, and had an image of him walking freely, with his legs moving comfortably.  I did not move my hands, but just imagined as I held my hands there that one hip and hind leg was moving forward, then the other - that he was walking.  As I continued working with him, sometimes my hands were on him and other times just off, as my intuition guided me.  And I kept seeing that mental image of him walking freely, without actually moving my hands on his body.  Continuing to let the Reiki flow throughout the session.

Niseema gently placed him down on the couch on his side next to me, and he settled in comfortably.  At that point I had one hand just off his chest and the other just off his lower back.  I felt the energy was traveling through his whole body.  He became so peaceful.  So lovely to see him so at ease, particularly when I thought about what the situation had been just the previous week.

Ups and downs are usually part of the territory when working with an animal with challenges such as Mr. Ji has, but fortunately Reiki and the other gentle modalities I use can often help the animal to be more comfortable and as much in balance as is possible, given the situation.  And Niseema is doing everything possible (and then some!) to help Mr. Ji to be as happy and healthy as possible.

Sending good vibes for continued comfort and health for dear Mr. Ji:)  xoxo  And thank you Niseema for giving this sweet dog so much love and care.
Posted by sarahsuricat at 12:54 PM No comments: 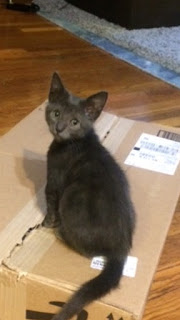 Willow is a beautiful grey kitten, about five months old.  When I first went to visit her, she was having trouble with upper respiratory infections, as well as intermittent related issues such as lack of appetite, lethargy and some wobbliness in her walking.  She is under veterinary care, and was taking medication for a period of time.  The doctors have not at the moment found the source of the wobbliness, but her balance has gotten better since it first appeared.

My two cats, Natalia and Lulu, usually receive Reiki twice a day, after their morning and evening meals, settling on either side of me on the bed.  I have been doing Willow’s sessions after our morning Reiki.


Often I will place a photo of the animal in my lap for a distant session, and it helps me connect with the animal.


As I started letting the Reiki flow to Willow, I closed my eyes for a bit and began to really feel she was there.  It was as though her spirit was with me, and she was larger than life.  I felt her nestle in my lap, and felt her fur on my arms.  I felt an intense light and energy around us. 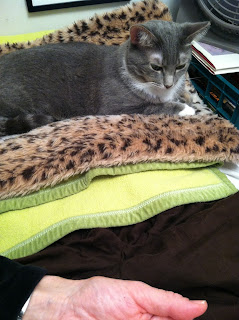 I opened my eyes and saw that Natalia was looking in my direction, as though she was watching what was happening, and that she was a part of the energy flow, offering some of her own energy to Willow.  It also seemed like she was feeling the relaxing vibes, just grooving on it with her eyes half closed.  Lulu was completely curled up asleep. 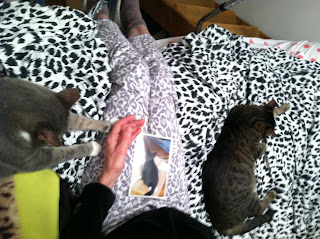 A few weeks ago, I was feeling stressed about something.  When I started the session with Willow, Natalia put her paws on my lap, right by Willow’s picture.  Suddenly I felt myself let go, becoming one with the energy from Natalia, Lulu, and Willow. I felt all three of them healing me.  I felt connected with them and with all of life, feeling the oneness of everything.
Reiki energy goes where it is needed, which is why it is so important to keep an open mind and heart, and to release expectations about what may happen.  Some of the most amazing things can happen when one is truly open and in the moment.  Natalia reminded me to simply be there, in the moment, in the middle of all the beautiful, loving energy.


Since that session, Natalia will come and put her paws on me or on Willow’s picture, or sometimes just face in my direction, becoming part of the healing. 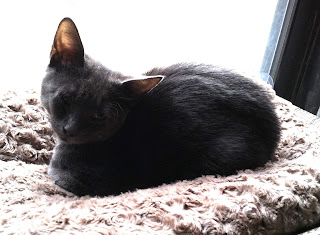 As I have continued the sessions, I have to felt Willow’s energy become stronger and stronger.  I began to feel that her internal light was becoming brighter.  And even when I look at the same photo I have been using of her, I feel her emanating light and energy.  Her eyes seem brighter, and generally she seems stronger physically and energetically.  And the stronger that I feel Willow's energy, the more casual Natalia seems in her connection - she will now most often just look in the direction of Willow's picture, rather than putting her paw directly on it.
A couple of weeks ago, Lee had said Willow was doing much better, and when I checked in with him today, I was delighted to hear that she has been great, that she is doing really well now.
Willow has two handsome kitty brothers, Remington and Quinn.  I am doing distant Reiki sessions with them as well now - so I will look forward to sharing more about them another time:)
Thank you Willow, and to my Natalia and Lulu.
I am reminded of the Reiki precept "Be humble."
Working with the animals can be one of the most beautiful and humbling experiences one can have.  I am honored to have these experiences, and thank the animals every day for sharing their love and wisdom with me. The animals have so much to teach us, if we can only quiet our own minds enough to listen.
Posted by sarahsuricat at 9:34 AM No comments: