Kittens and Cats at Social Tees 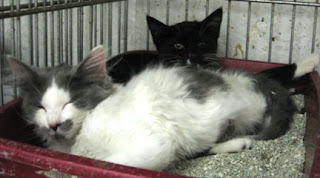 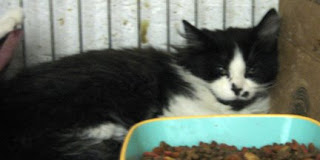 Yesterday I went to Social Tees (http://socialtees.com). First I worked on the three shy kittens above. I had worked on them the other day and the session had begun with them all hissing at me. This time, the two in the top picture did not hiss at me so I did TTouch on them directly with my hand instead of using the feather. The black and white cutie on the bottom was still hissing and growling but was less intense about it than before.
To get the more scared kitten used to having my hand in the cage and have it used to me being there, I began with TTouch on the other two kittens, particularly the grey and white cat as it seemed the least scared and was closer to the front of the cage. I did raccoon touches on the head and around the ears, ear strokes, and on the body I did baby chimp touches, llama touches, and in some cases just the back of my finger went in a circle, as these are really tiny little creatures. The grey and white kitten moved away at various points. At one point it started climbing up the side of the cage. At those points I moved my hand away and focused my attention on the black and white kitten. The grey and white kitten then would come back towards the front of the litter box again and settle down. Intermittently, I would also do ttouch on the head and body of the black kitten, when it was possible for me to reach.
As for the black and white kitten, each time I went towards it, it would initially hiss and growl a bit. I persisted, and touched it initially with a feather, stroking its head, around its ears, and down the body with the feather. The hissing would then subside, though any loud noise that would happen in the space would startle all three of these kittens, they are still on very high alert. At any rate, with the black and white cat, there were a number of moments where it truly was able to relax with my hand doing TTouch on it, several times I saw and felt a sigh, and then a relaxation as it grew more accustomed to me. I kept each little burst of touching short, as after a while it would get scared again and hiss at me, so at that point I would switch to working on one of the other kittens. At no point did any of the kittens try to bite me. Altogether, I would say they are feeling increasingly safe there, it will just take time and patience, as whereever they were previously must have been extremely traumatic.
I then visited with the three kittens I had worked on previously. Now the two stripey cats are TOTALLY friendly, wanting to cuddle and be touched. The black and white kitten is still shy - not hissing or biting, but just introverted and afraid of being touched. I did some gentle, soft chimp touches on its body and around its ears. I'm sure it will come around very soon.
I visited the adult swirly-stripe cat who now only initially hisses when you put your hand in the cage, but after a few circles with the wand and corn dog, I worked my hand down the corn dog and was able to do TTouch over its entire body and head - ear touches and strokes, hair slides, and connected abalone and clouded leopard touches down the sides of its spine.
The two tabby girls are still there as well. The small one is still completely receptive to TTouch and the all-tabby girl is making her own kind of progress. When I first looked at her today, she blinked and blinked at me, instead of having the frozen, terrified-looking stare that I am usually greeted by her with. When I went to touch her with my hand, she still was scared of this and began to move away, but I found that if I start with the wand and corn dog, I can quietly transition to doing TTouch using my hands on her. She still needs quiet, patient attention.
As always, these cats, as well as a number of other cats and dogs and other animals are up for adoption at Social Tees, so if you are in NYC and looking to adopt an animal, check them out!
Posted by sarahsuricat at 12:08 PM