Brooklyn and the new crew at Whiskers 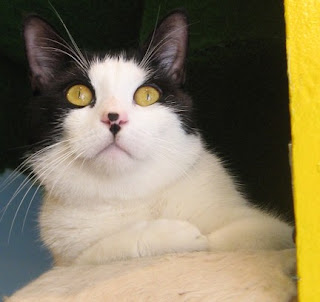 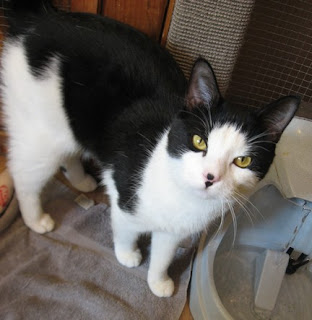 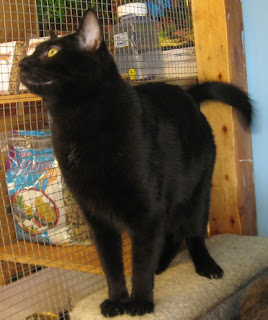 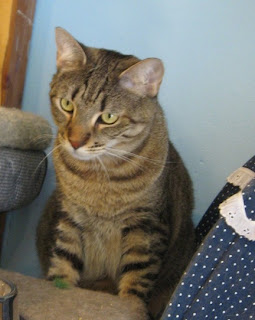 Yesterday I went back to Whiskers in NYC (http://1800whiskers.com/) to work on the rescue cats there. I was happy to see that two of the cats I had worked on previously, Hamilton and Beyonce, had been adopted, hooray! Brooklyn (the black and white cat pictured above) is still there along with two other cats, Rascal (black cat w/green eyes) and Emily (tabby). Rascal and Emily are brother and sister so Whiskers would like to adopt them out together. I could tell that these two were EXTREMELY connected.
One of the staff advised me that Brooklyn had come out of his shell a lot since I saw him but that Emily and Rascal needed some encouragement to come out of hiding.
Upon entering the enclosure, all three cats were on perches way up high. I began to do some small circles on Rascal and Emily with the wand and corndog (ace bandage wrapped around wand), and shortly after this, Rascal began to come down to where I was. I sat down and called to him and he actually came over to me, followed by his sister Emily. They both seemed to really long for attention. I first did ear touches and touches on the body with the back of my hand, Noah's march, llama touch and chimp touch, which they both really loved, and were rubbing themselves against me. Rascal was particulary interested, and kept calling "meep, meep, meep" whenever I paid attention to one of the other cats. Every once in a while I would locate Brooklyn on one of the perches above. When I put the wand w/the corndog up there, he wanted to play with it. I tried touching him with the second wand, but he wanted to play with that as well.
After a good while of TTouch, Emily went back up on her perch above. I had been able to do ear strokes with a fairly strong pressure, as well as TTouch on just about every part of her body. Rascal remained near me, asking for more TTouch. While I was working on him, Rascal and Emily's former foster mom came by to visit and was pleased that I was doing TTouch on them, she remarked at how relaxed Rascal looked. He had been pretty ramped up when I started working on him, walking back and forth, rubbing himself against me. After this, I had a moment with him when he looked me straight in the eyes and we had one of those powerful moments one can have with a cat when they seem to stare right inside of you.
After Rascal decided to go back to an upper perch for a nap, I managed to lure Brooklyn down to where I was with just a couple of little pieces of dry food. Once he was down near me, he seemed in an over-stimulated mode, with tail going back and forth, but he kept coming closer to me, would rub himself against me, let me do a few touches, then he would go back away again. We did this a number of times. Each time he came closer to me, he seemed to sit beside me a few seconds longer.
After a while he swatted at me to let me know that he had enough.
This was quite a move ahead for Brooklyn - a week ago, he stayed in his little cat tent the entire time I was there. He seems to now be longing for and seeking out attention, he is just still a little cautious, so needs a very patient approach.
All three of these gorgeous cats are up for adoption, so contact Whiskers if you are interested!
Posted by sarahsuricat at 10:31 AM