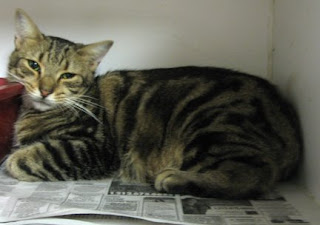 Friday I went to Social Tees (http://socialtees.com), there were a bunch of new kitties there, who will hopefully be getting new homes soon. Also, over the past week, a number of the kittens I have worked on were adopted, hurray!
Above you see the adorable swirly-striped cat I have been talking about, it is shy but very comfortable with me doing TTouch on any part of its body. The cat really seems to recognize me and know that when I open its cage, I am going to do something that will be soothing. I think I forgot to say last time that after I worked on this cat, it started grooming itself, as though it was more comfortable, as before it had been crouched and not moving.
I continue to try different strategies to work with the multi-colored longhaired cat, it is still very afraid. I tried touching it with the wand today and it is still too afraid for me to make contact. It is ok with me doing circles from a distance but that seems to be it. I have done some short Reiki sessions on this cat as well and that, combined w/TTouch circles from a distance may be the best strategy, to try to relieve some of the cat's tension at a distance.
I also worked on the two timid kittens I worked on last time and we are making good progress. They tried to move away from me again initially today, but once I began to do some TTouch on them, they both calmed down and were comfortable with me doing TTouch on their ears, head and body for a while. At some point I let them be and worked on some other cats, and when I came back to the cage, the more timid one was sitting towards the front of the cage. I started to do some TTouch on its ears, and it was as though it had forgotten that it was timid, it did not move away this time. I am realizing more and more how important it is to take breaks with these timid cats -- to do a little work, go away for a while, then come back and do some more. Often when you come back the next time, you are able to get to another level of contact with them.
A lot of neighborhood people come by to volunteer at Social Tees, which is wonderful to see. Friday also seems to be a day when a lot of folks drop by looking to adopt. Hoping for a lot of these cuties to get new homes soon.
Posted by sarahsuricat at 10:52 AM