Yesterday I went to Social Tees to do TTouch on the cats and kittens there. I was SO happy to see that the three kittens who were pictured in my last post no longer hiss, even the shyest of them, the black and white kitten, hooray! I hope these little dear ones will have new homes soon. Their reaction when I go to touch them is completely different than the other day, and for the black and white cat, completely different than even the day before. I am so grateful for this work and the power it has to help the animals.
The other set of three kittens I worked on previously is also continuing to do well, although there is one that is still shy, again, for some reason, a black and white kitten. It went into a corner but I did some gentle raccoon touches all over its body. I am sure that in time it will come around.
Yesterday I worked on a number of other cats as well. I again worked on the two tabby girls. The all-tabby girl is still afraid to be touched directly with the hand initially, so I have to start out with the wand and corn dog and be very patient with her. However, what is really interesting the past two days is her initial reaction to me upon opening the door to the cage. She used to look at me with a wide-open, huge, terrified stare, and now she continues to lay down relaxed, exchanging blinks with me. I think with some persistence she will be able to be less afraid of touch, it will just take time with her.
And, a humorous moment in there yesterday. One of the cats that is loose in there (I believe it is a feral cat) was stationed on top of the refridgerator and had decided its game for the day was to stay there and hit each and every person who walked by on the head each and every time they walked by. He was having a good chuckle to himself, I'm sure!
Now, as for the new challenges. First of all, I began work on a black cat. This cat raised its head up in an arc, hissing and getting ready to swat when I opened the door. I approached the cat with my body to the side of the cage, as usual, and began to try to do small circles with the wand and corn dog. The cat again hissed, and bit the corn dog. I took a deep breath (important to remember to breathe, as this is stressful for the TToucher as well as the TTouchee in this case!), spoke to the cat softly, and tried again, this time starting the wand out on the body area instead of near the head. This went much more peacefully, and I tried to really slow my own mind down to help create a more quiet atmosphere. I continued strokes and circles on the cat's body for a few minutes, then worked my way up to its head. Still no hissing, so I continued to talk in a quiet voice and little by little worked my hand down the wand until I was touching its head with my hand. I had to focus on keeping breathing, as I have to admit, I was a bit afraid of what this cat would do next. I was able to do strokes on its ear and raccoon touches on its head for several minutes, which is a long time for this cat. At some point, it did jerk, hiss, and swat at me (though without its claws out - assuming it has claws). I decided this was enough, as it really was a move forward for this scared creature. 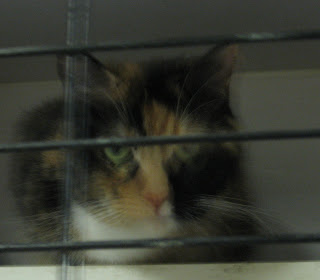 Then came the biggest challenge of all, the gorgeous, but very serious customer pictured above.
This cat was brought in a few days ago, and the day it was brought in, I was working on a cat near it and it suddenly appeared to suddenly levitate, kicking litter out of its cage and into my face. That was a bit of a startling introduction, but I really felt for this poor cat and tried to send some soft energy its way.
Today, when I opened the cage, it is even hard to describe exactly what happened, but some combination of the cat lifting into the air, hissing, spitting, swatting one front leg after the other. OK! I tried the wand and corn dog but the cat simply wanted to bat at it, bite it, and wanted no part of it. I was a bit nervous about it biting me or jumping out of the cage, so I put the wand and corn dog in through the closed cage the next time, all the while speaking softly. I got in a couple of circles but again, the cat was terrified, hissing, swatting, biting etc.
I usually don't mix two types of modalities together in one session but in this case I really thought I wanted to try to see what could help this animal. In addition to being a TTouch PIT, I am also certified to do Reiki with animals. I stood outside of its cage and began to imagine a bubble of Reiki energy in front of me, in between me and the cage. What happened next was so interesting. The cat immediately responded and came to the front of the cage, curious about what this energy was outside the cage. I stayed there for a short time, maybe five minutes, doing this, as I was afraid to try too much. Stay tuned, we'll see what happens next time!
Posted by sarahsuricat at 10:47 AM