3 Little Kittens in a Row 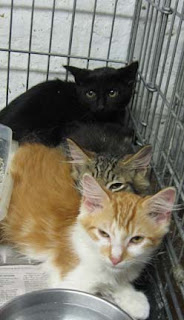 The other day I went to Social Tees (http://socialtees.com) to do TTouch on the animals there. I had a rough day beforehand (the details of which I won't go into right now) and was feeling quite sad, but my spirits were lifted by working on these three little adorable kittens who had recently arrived there and were scared. I did circles on their heads at first with a feather in order to get them ready for being touched by my hand, and they were quickly ready for my hand to do TTouch on them. I used a very light touch, especially with the little black kitten at the back of the cage, who was the most scared. With kittens I generally do raccoon touch on the head with just one finger, then do strokes on their ears, and often use baby chimp touch on their bodies. However, sometimes if I feel they need a calming touch using more of the hand, I will do abalone touch on them. I think both the kitties and I felt better by the time I was done :)
Posted by sarahsuricat at 10:29 PM