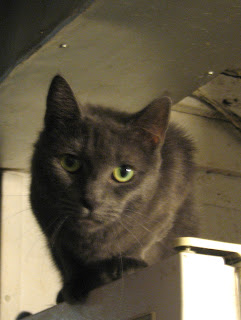 Hi folks, this afternoon I was back working at the shelter at Social Tees (http://socialtees.com/). First of all, the photo above is of the dear feral rascal who I mentioned in my last Social Tees post, who was sitting atop the refridgerator and bopping each person who walked by on the head with his paw. Today he was up to the same trick - and so here he is in the photo with that "who, me?" look that cats can have.
Next, I was VERY pleased to hear that the two tabby girls who I have been working on over the past several weeks or so have been ADOPTED, and fortunately they were adopted together. I wish them the best in their new life!
Today I worked on the black cat I worked on last time, who at that time was VERY stressed, hissing etc but I was able to do a short session around his ears and head last time. Today, he was in a hunched-over sleeping position squished inside his litter box. I first approached him with the wand and corn dog, and he hissed initially, but right away then put his head down out of view in a sleeping position. I did circles all over his head and body with no complaint. I was hoping to see some relaxation of his back, which felt quite tense. I did get some relaxation, and he was not hissing and threatening to swat as he had done last time. He seemed afraid though, as he did not lift his head to look at me at any point but stayed in a sleeping position. I was not totally sure how to read his body language so was a bit hesitant to touch him with my hand, but I worked up the nerve and did some ttouch on his head and ears with my hand, and he was very relaxed with this. He is making progress, he will just need time.
Then I worked on the multi-colored VERY scared cat who I began to work on last time. Today I began by doing a short reiki session. He did not come to the front of the cage as before, but he did not give any visible resistance either. I kept talking to him and occasionally he would blink at me. After this I slowly approached him with the wand and corn dog. This time I did slow air circles starting nearly a foot away from him. Little by little I decreased the space between him and the corn dog until I was a few inches away from his body. This was as close as he was comfortable with, but it did feel like progress today, as I found that his body appeared to grow more relaxed as I continued the air circles, as long as I did not get too close to him. This cat will need patience but I am sure if I continue to approach him slowly he will come around in time. After I finished, he faced away from me, as though that was all the contact he could take for now. Here he is below - you can see what a gorgeous coat this cat has. 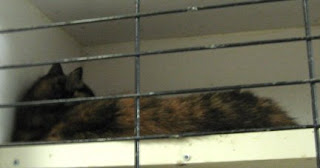 Then I worked on the swirly-striped cat that I have worked on before, and this cat has become SO much more comfortable. Today there was no hissing even upon initial approach, and he was very relaxed as I did raccoon touches all around his head and ears and abalone touch down his body. Below you see a photo of him looking at me after our session, with a sweet, relaxed look I had not seen on his face before. 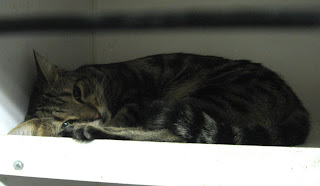 After that, I briefly visited with and worked on the two sets of three kittens I have been working on, and they all continue to make progress. I hope they will be adopted soon!
And I met a friendly new little Chihuahua in there today, who was very pleased to have some clouded leopard touches done on his body. Some people were considering adopting him when I left today, so I'm crossing fingers for him. Have a good weekend!
Posted by sarahsuricat at 10:38 PM