Cats and Kittens Galore at Social Tees, and a Kiss from a Kitten!

Yesterday I was at Social Tees http://socialtees.com/ to do TTouch on the animals, and they have a full house there - so if you are looking to adopt a cat or dog, check them out! I had a lot of little critters to work on - so I will just mention some of them.

Below is a gorgeous long-haired orange cat. She was quite afraid, but didn't seem as though she would bite. I was able to do TTouch on her head right away, but she was more hesitant about me touching her body. I then used the wand and corn dog (ace bandage wrapped around wand) to do circles on her body and head. She was very responsive to this so I continued for a few minutes this way. I gradually worked my hand down the wand to her body, and she was much more comfortable this time when I touched her with my hand. I didn't work on her for TOO long because I didn't want to overwhelm her. I think with some quiet, careful work, she will come around pretty quickly. 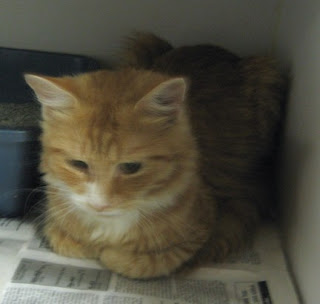 The gorgeous gray cat below was very friendly. He is a very big guy and wanted to come out of the cage and into my arms shortly after I began to do TTouch on him (I couldn't let him do this as there are cats and dogs running around loose in there). I did ear strokes and raccoon touches on his head, then clouded leopard and Noah's march with thte back of my hand on his body and he was very responsive. He told me when he had enough by doing a soft swat (not with claws out). 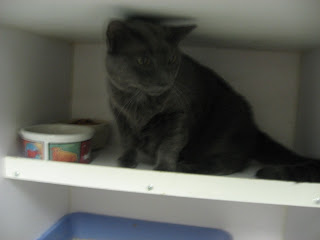 I also worked on three kittens in one cage who I have been working on before (a b/w shorthaired kitten, a tabby kitten and a longhaired b/w kitten). The tabby kitten continues to be completely friendly and came to the front of the cage, continually rubbing itself against me and against the cage. This time, the b/w shorthaired cat, who has been coming around, started to compete for my attention, rubbing itself against me also as I was doing chimp touch and hair slides, etc on both.
I have to admit that the highlight of the day was probably when the little black and white kitten put its head through the cage door and gave me a tiny kiss!
Below you see this cat taking a refreshing drink of water. 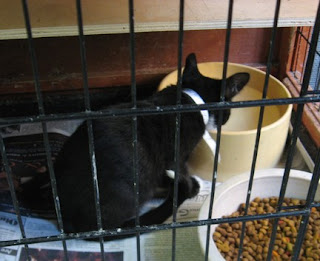 The long-haired black and white kitten in the same cage (who you see below left) is still quite shy, but is coming along slowly, so I have to respect the pace at which it is able to go, working on it a little at a time, doing soft hair slides and llama touch on its body and raccoon touches and ear strokes on its head. You can see the tabby cat right up in front in the picture below. It really was trying to come home with me! 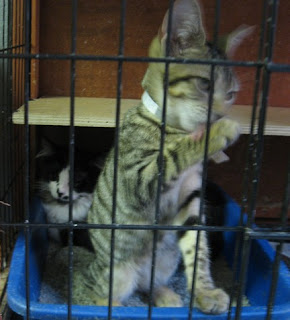 Another touching occurrence at Social Tees is that this dear black and white feral cat below, who is loose in there, always comes and sits by my feet as I do TTouch. Here it is, cozily cleaning itself. I wasn't sure if I would be able to touch it but it has been rubbing itself against me, so today I carefully did some gentle TTouch on it, which was quite interesting as it has trouble walking as its back end is not functioning too well, and after I did some gentle strokes down its back it started licking itself there as though it was more aware of that part of its body.
PS I also did some TTouch on the black and white dog, Ricky, who I worked on before and it does seem she is starting to walk more easily, hooray! 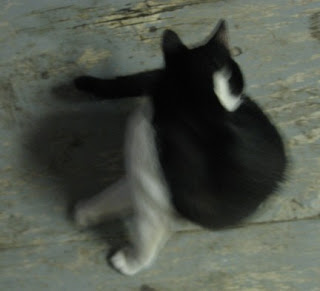 Posted by sarahsuricat at 10:23 AM