2 Dogs and A Bone

Doesn't the black and white dog look as though she is smiling? 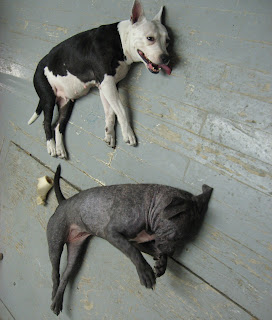 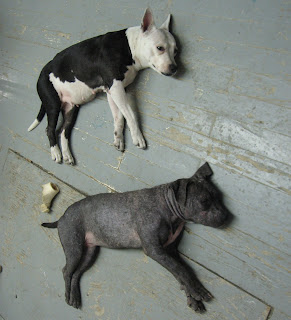 Yesterday at Social Tees, I saw the endearing sight of these two dogs and a bone resting on the floor there. I had worked on the black and white dog, named Ricky, for a while and she was ready to rest at this point. She has trouble walking as she had been kept in a cage for years (I think they said something like four years!). I did a number of things with her to hopefully increase her awareness and connect the front and back ends. I did zigzag touches and Noah's march down her back and strokes going down the front legs and the back legs. I did python legs on both the front and back legs. I also did connected clouded leopard touches going all the way down her back, and at one point just rested my hand on her lower back just to have her feel the warmth there. She was very receptive and did not appear to have any pain as I was doing this. At various points after doing some touches on her, I would have her walk a little bit to see how she was incorporating things. I'm not sure what happened exactly to her medically after being enclosed for so long, but after watching her today it appears she will gradually be able to have more balance and mobility. She is a terrific dog and has a wonderful attitude. She seems so grateful to be out of a cage and to be able to have contact with people and other animals.
.
I also worked on a bunch of cats as they had a whole lot of new kitties in there. The most challenging is still the calico cat who is so fearful. There were also three new little kittens who were quite scared and were hissing at first. Shortly after I began to do TTouch circles on their head with a feather, they calmed down. The black cat on the upper left and the b/w cat on the bottom were receptive to TTouch both on the head and on the body, but the one on the upper left was more scared, and so only wanted to be touched on its head at this point, so I respected its wishes. It did seem to be very calmed by circles on its head and strokes on its ears with the feather. 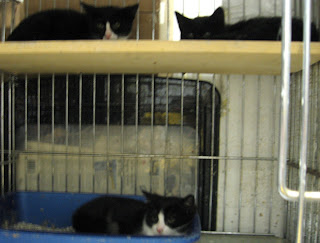 Below is a very handsome kitty who I also did TTouch on. He is a very friendly guy. There are a bunch of other cats there who I didn't have a chance to take pictures of, but if you are looking to adopt an animal, and are in NYC, check Social Tees out. There are a lot of dear little critters who need a home. Robert Shapiro, who runs Social Tees, gets most of his animals from the kill shelters, taking these animals off of death row, a great thing for sure. 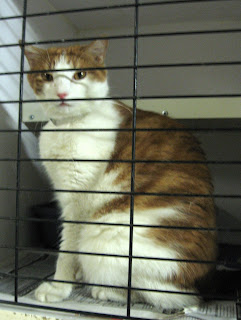 Posted by sarahsuricat at 10:31 PM