Keeping Cool with the Cats and Kittens at Social Tees

Yesterday I went back to Social Tees, particularly because I was interested to follow up right away with the three kittens I had worked on the day before, as we had made a LOT of progress in one session. The atmosphere there was a bit more hectic, with a new dog in the space, but the progress was amazing. I just had to remind myself of a concept which Linda Tellington had taught us about, called heart coherence (more about that sometime later), and to remain in the moment with the animals. The little kitten with swirly stripes, who had been the most reluctant with me, almost immediately started rubbing its entire body against my hand, coming out of a sitting position, stretching up on its slim long legs as it rubbed itself along my hand and arm, and then grew a little playful with me as well. The black and white kitten was very comfortable with me touching it, and after a momentary flinch, the other little tabby kitten was very comfortable as well. As I was working in the front of the shelter, the staff at Social Tees had been able to observe the changes in the kittens over the past day and were delighted. These little darlings are up for adoption (see photos in yesterday's post), as are the other cats I discuss here, so give them a call if you are interested!
(http://socialtees.com/) 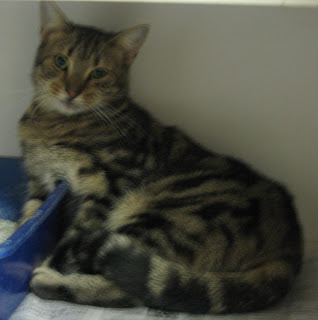 I also had the opportunity to work again on the two tabby girls, who continue to grow more comfortable each time I work on them, as well as a new lovely stripey cat, pictured above. This cat drew its head back and hissed at me when I first gently approached it with the wand and ace bandage (known as a corn dog), but I persisted, speaking gently to the cat and doing very gentle circles with the corn dog on its back and around its face. As Kathy Cascade (http://spiritdog.com)/ showed us in the last training, I moved my hand further and further down the wand towards the cat's back until I was touching it with both the corn dog on my hand. Gradually I began doing chimp touches and llama touches on the cat's back, then on its head and around its neck area, as I felt the cat's body grow more and more relaxed. By the end of the session, the cat was so comfortable that it was curling up and getting ready to go to sleep.
Posted by sarahsuricat at 10:46 AM