Today I was at Social Tees, and first I did TTouch on the black cat I worked on last week. It was still in its litter box with its head down, every once in a while barely peering its eyes up but mostly very hunkered down. I first did some circles w/the wand and corn dog to see how the cat reacted, and it was a bit startled at first, but then did not resist, so I continued doing some circles with the corn dog and quickly transitioned to doing raccoon touches on its head and connected clouded leopard touches down its body. I felt it very gradually relax as I did this. I spoke very softly to the cat as I worked, reassuring it. Then I gave it a break and went to try to connect with the multi-colored longhair cat who is even more afraid.

With the multi-colored cat, I was pleased to see that it was laying on the ground towards the front of the cage and did not move right away when I walked towards the cage. I offered the cat Reiki and imagined a bubble of light in front of the cage. I stayed like that for about 5 minutes or so, and the cat was continuing to stay calm. A pit bull puppy who was wandering around came near me to check out what this bubble of energy was, as did the two kittens in the adjacent cage.

Then I opened the cage and gradually approached w/the wand and corn dog. The cat was startled and swatted at it, so I started again as I had previously, doing air circles w/the corn dog about a foot away from the animal. I very gradually got closer, and tried doing circles near different parts of the cat's body to see where it was most comfortable. I ended up doing circles and strokes in the air above the cat's head as though I were doing circles on its head and strokes on its ears. I got closer and closer until I nearly touched it and it got startled, so I apologized and backed off. I spoke softly to the cat and did Reiki outside of its cage for about another five minutes. Then I went back to where the black cat was, and below is a picture of what I saw. The cat had finally emerged from the litter box and was looking straight at me.
I 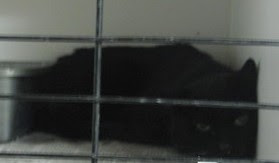 I opened the cage and it initially made a sad little whimper, but it was not threatening to bite, it was very responsive and seemed very comfortable as I did TTouch on its head and body, and it grew more relaxed than it had been before. One of the staff was surprised and pleased, she said that it was the first time the cat had emerged from the litter box since it had been there. I feel this cat really turned a corner today and will visit it again soon to encourage it to continue to come out of its shell.
Next, I went back to the multi-colored cat. I did not want to overwhelm it, so again I did just a couple of minutes of Reiki outside of its cage. I feel that I need to just have patience with this cat, that it is coming around but it needs time to build confidence.
Here it is below, resting peacefully, which is a pleasant sight to see, especially for this cat. 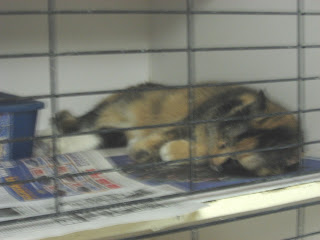 Again I went back to the black cat to work on it briefly and say goodbye. Again it did a sad little sound when I first touched it, and then was very relaxed as I did a little TTouch on its head.
Before leaving, I worked briefly on a swirly-striped cat who has become very friendly and two kittens who had been recently brought in who were timid. With the kittens, I touched them with a feather first briefly, then did little raccoon touches and baby chimp touches on them. They became more relaxed as I worked on them, especially one of the two, and it enjoyed having its ears rubbed as well.
Social Tees has many cats and a few dogs up for adoption so if you're in NYC and looking to adopt, stop by :)
Posted by sarahsuricat at 11:26 PM