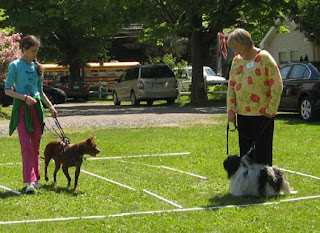 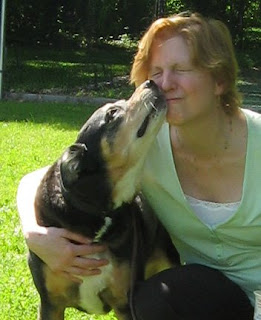 Kathy and Mia at Dayton Training
On July 9 I got together with Marge and Kathy, who are both Feldenkrais (http://www.feldenkrais.com/) practitioners and were both in the TTouch training I took in Dayton with Linda Tellington-Jones. Linda was one of Feldenkrais' students, and TTouch has its roots in the Feldenkrais method. Both of these modalities are so subtle, yet so powerful.

Feldenkrais work has helped me a great deal over the years with a number of aches and pains, as well as being able to help me in times of great stress (and Kathy is a wonderful practitioner who has worked on me many times), and Feldenkrais work is what led me to TTouch in the first place. Kathy, Marge and I had some wonderful exchanges during the Dayton training, and above you will see a couple of photos of us there (Marge and I are walking other people's dogs).

So back to the story at hand. We met at Kathy's house, so we could work together on Kathy's animals: her dog Mia and her cats, Cuddles and Scooter. Kathy and Mia recently moved into her mother's house where Cuddles and Scooter were living, so suddenly there was a new dynamic with Mia in the animal mix.

The biggest problem in the household is Scooter's spraying. Kathy believes Scooter's world has been upset because Mia has come to live with him. Mia and Scooter have a "tolerant" relationship with occasional staredowns that end with Mia doing a start-chase (doesn't follow through) and Scooter runs and then sprays some piece of furniture or a door. Mia is very jealous of any being to whom Kathy gives attention--including Scooter and Cuddles. Kathy feels that both Scooter and Mia are insecure. Scooter is the shyest. Mia is very needy and Kathy thinks a lack of self-esteem lies below that. Cuddles is the youngest and the most calm and secure. Kathy believes it is her nature being part Maine Coon. Her still nature seems to annoy Scooter. (she really likes Scooter and Mia). As Kathy was working with Scooter she sensed that his tail and hind quarters were very tight and it was hard for her to get to these areas. She thought I might be able to get through to Scooter, and I was delighted to have the opportunity to work on him for an extended amount of time and to work briefly on Mia and Cuddles as well. 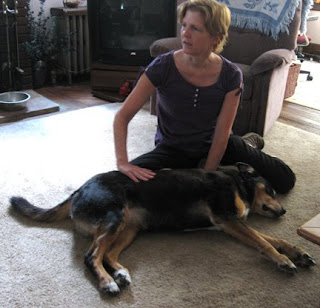 Kathy picked Marge and me up at the train station with Mia in the car. When we got to the house, Cuddles was relaxed and hanging out on the ground floor, and Scooter was in his favorite morning place, the window of her mother's bedroom. 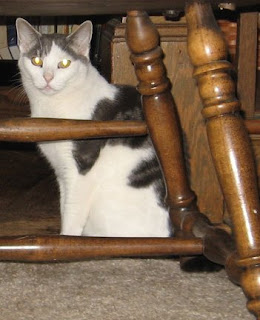 I wanted to approach Scooter very slowly and see how much contact he is ready to have with me. I wanted especially to eventually try to get to his lower back, where Kathy said she was having trouble touching him.

Kathy came very quietly with me into the room where Scooter was, and she stayed with me for the first part of our session. This was a great idea so that I wasn't a totally new person all alone with him.

I spoke softly to Scooter, introducing myself, and first started on Scooter's head, doing small, light raccoon touches around the base of his ears. He was very calm, sitting in the sunny window and gave me no resistance to touch from beginning to the end of our session, which probably was approx 15-20 mins.

I worked with very light pressure (1-2 pressure) and was able to go all the way up and down his spine and he continued to become more relaxed. Then I worked my way up to doing baby chimp touches and clouded leopard touches all the way down his spine and down his tail, and later on I finished up with some work around the mouth. All the while, I felt the calmness, the warm sun and the cool breeze gently coming through the window, and felt Scooter's comfort with the touch and with the environment.

Scooter grew more and more relaxed the more I worked on him, and he started to drool, which Kathy says means he is very relaxed and comfortable. As I started to feel I was done with Scooter's session and was winding down my movements and speaking to Kathy, Scooter also felt he was done and leaped gracefully from the window.

Later on, I saw Scooter in a different room and he was lying on his back, like he wanted to play. I did a few touches on him, played a bit with him with one of his toys, and that was it. He seemed very comfortable.

Here's Marge's report on Mia: "Me-Me, Mia, working with her was very subtle indeed. After we first got there. I did some Noah's Marches with back of my hand. I actually did several and connected from her head down her body and to the end of each leg. Did some clouded leopard across her neck, shoulders and along each side. We had a little break and when I worked with her again, it was with the jelly-scrubber. I used the side with the tiny, fine nubbies against her body. I did the T-touch circles all over her body including around her tail and thighs. Inside the scrubber, I was using the abalone touch, but the scrubber really provided a lot of surface and a very soft, supple touch. I also did Noah's Marches with the scrubber."

and Marge with Cuddles: "I didn't really work with Cuddles with my hands, but when we started playing with the wand & corn dog, I made circles while she had the corn dog in her paws, did circles on the floor near her. She's so easy, I didn't really try anything specific with her - just incorporated circles into the play she likes so much."

I had not used the scrubber much, so I tried it on Mia and felt how it could be comforting for certain animals, especially with all those little nubs creating a massaging type of feeling. Mia definitely responded to it well. My cat Garbanzo is not fond of it, he prefers the warmth of my hand. Different strokes for different folks! And I did some TTouch also on Cuddles, who was perched comfortably on the couch at that point. She is comfortable with just about any part of her body being touched, but I did use a rather light touch on her, as most cats prefer that. 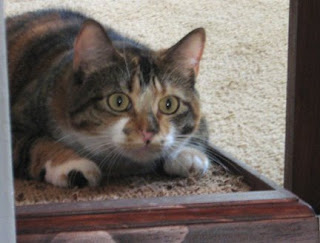 Cuddles getting ready to pounce and play
Kathy and her mother were very gracious hostesses and gave us a lovely lunch after our TTouch session. Thank you so much!
Kathy's report the night after our session was very exciting. It seemed to me that Scooter had really turned a corner and was now receptive to Kathy in a way that he had not been before. The report on Mia was remarkable as well, and Cuddles was also very cuddly.

Here is what Kathy said:"Scooter: he just wants more and more attention. It's so cute. I was lying on the floor around 4pm doing a little Feldenkrais movement…-- had my eyes closed as I was moving, Mia was resting at my feet. All of a sudden I opened my eyes and there was Scooter, sitting beside me, waiting to be pet. It was so cute. He was very relaxed, different because it's very rare for him to come to me in the living room with Mia so close. And Mia was resting comfortably. I was able to do a bit of TTouch. I didn't do too much because i knew he had a lot of touch and it was MY time (I never get much time to myself). It was a very sweet surprise to see him sitting next to me. Same thing tonight when we came home. He just wanted to be touched, didn't even want to eat. I wish I could read his mind to know what it is he is looking for in the touch! This evening I was able to work into his hind area. Again, I only did a bit because I knew he had a lot today, but only a bit and he was drooling again. One thing I realized tonight is that I really should show my mother some of the touches because he kept coming around me and he's her cat. But it's good to have gotten an "in" with him. Mia: Mia continued to sit with her left arm straighter. So interesting, it's like she heard me talking about her R forearm and she decided to sit in a way where her arm/paw lie flatter along the ground. She was very relaxed. When we went walking in the field with my sister and her dogs, Mia was running with energy I have not seen her run with for a while. I know part of it is the cooler weather, but I could see also that she was really enjoying moving. I hope to get one of those scrubby brushes (sorry, it's late and I forget what they're called) soon! Cuddles is still her sweet loving self. But she too was very insistent on being touched." 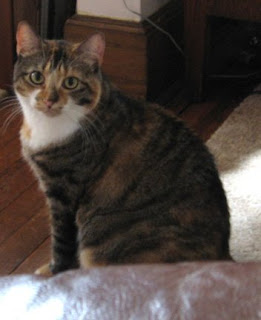 Cuddles looking cute!
And here are Kathy's comments from 7/11, two days later: Tonight Mia allowed Cuddles to be on my lap without whining. I had done some TTouch (a short session) on Mia first and she seemed pretty relaxed. I never know, is she more tired anyway? Since it so rarely happens, I'm going to credit TTouch. It really is wonderful what can happen with this work. Scooter is begging me now to pet him. He has always liked to be pet when i'm on the computer at night, but tonight I was able to do circles all the way around his ears...pretty cool. And let me get to his hind area. He let me work down is tail--it has tension still. I also noticed that he stand with his back legs together closer than I think I usually see. Makes me wonder if we could get him to shift, widen his stance, would he spray less?
When I was working with Mia on Thursday (after Marge) I explored the jelly scrubber (abalone) and also tried using a smaller portion of it a la clouded leopard. Then I worked without the scrubber: abalone around her shoulders, clouded leopard down through her torso, with pauses as I found that this was a way to be able to get all the way down her legs (she's very sensitive around her legs). One very interesting thing was that as I was working through her torso this last time, as I got to the thoracic lumbar junction it seemed like something let go. I had a feeling it was connected in some way to her shoulder and as we were mentioning, her Left shoulder/leg seemed inwardly rotated. I'm thinking that the accumulation of everything that was done with her that morning enabled her to release some pattern and we later saw her sitting much straighter over her R elbow. That has remained and also her foreleg and paw are lying less rotated on the ground, all her pads now are facing the ground and they weren't before. "
So thank you to one and all, this experience was truly a pleasure and a great learning experience as well. And especially Scooter, thank you, it was a very special experience to connect with you on such a deep level. I hope we have a chance to do this again -- and meanwhile, I am sure Kathy, with TTouch and the sensitivity that she has due to her deep knowledge of Feldenkrais work, will continue to make wonderful progress with her animals.
Posted by sarahsuricat at 2:51 PM