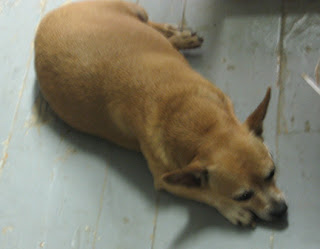 Yesterday it was finally starting to feel like summer outside. When I went into Social Tees (http://socialtees.com) to do TTouch on the animals, this darling chihuahua was peacefully taking a nap in a patch of sun there. He is a very friendly little guy and is up for adoption, by the way :)

I worked for a while on the very afraid multi-colored, long-haired cat who I have been working with lately. It is still extremely afraid, but little by little, I am able to get closer. Today I was working with the wand and corn dog (Ace bandage wrapped around end of wand), doing small circles and strokes, starting a foot or more away. I was able to get within a couple of inches of the cat and then it became startled, hissed and started batting at the wand. I tried this several times, giving the cat a break in between each time. In general, the cat does seem to be more comfortable though. When it is being left alone, it is sleeping towards the front of the cage rather than the back of the cage, usually facing front.

The swirly-striped cat I have been working on had been tried out in a foster home, which unfortunately didn't work out so it was brought back today. When I first opened the cage, it hissed at me but after a couple of minutes doing circles with the wand, I touched it with my hand and it was completely receptive, so I did TTouch all over its head and body. It was staying in the back of the cage, but it was comfortable with being touched, and seemed to remember me. Over time I think it will be more comfortable in its own body, it will just take time and patience. 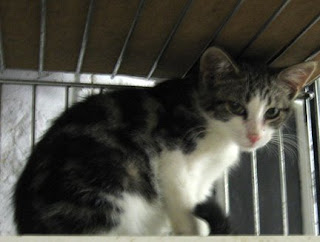 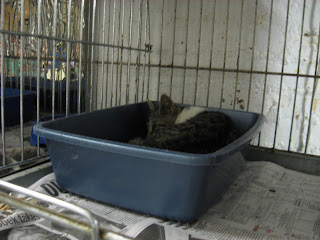 Next, I worked for a while on the two darling kittens above. They are very shy and wanted to stay in the back of their cage, but they were receptive to being touched, and seemed to relax a bit as I touched them. I did very small, light raccoon touches and baby chimp touches on their bodies and very light ear strokes. Shy kittens need an extremely light touch as they are so small and ultra-sensitive. I wish all of these animals the best!