Yesterday I went to Social Tees (http://socialtees.com) to work on the cats. The calico cat is still having a rough time, it is still so afraid. Each time I am able to do some air circles with the wand, but I cannot get too close or it attacks the wand, hissing, growling etc. I have done some short Reiki sessions with this cat and, as Reiki does not need to involve physical contact, that may be the way to go with this cat for a while.

I worked again on the swirly-striped cat, it is still shy, at the back of the cage but it knows that I am there to make it feel good, so after one little hiss, it settles down and is very receptive to TTouch.

I also worked on the two timid kittens who are together in one cage. They are becoming more acclimated to touch little by little. They still initially back away from being touched, but once you touch them, they settle down and become more relaxed. I did two short sessions with them, giving them a break in between. They previously had colds and are not sniffling any more, so this is great. I did some ear strokes and raccoon touch around their heads, in addition to baby chimp touch and llama touch (these touches use the back of the hand, which is less threatening than the front of the hand.

Then I worked on the set of three kittens below that I mentioned in the previous post. They had all been timid at first but are really coming around, particularly the little tabby kitten and the black kitten with a little white. The long-haired black and white kitten still hisses one time at first and tries to move away a little bit, but it once you stroke it gently, it begins to relax and settles into the touch. 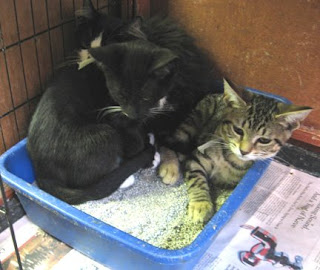 The tabby kitten has completely come around and was rubbing itself against me and constantly asking to be touched, even when I was doing TTouch on the other kittens. I was able to touch it on every part of its body, including doing a bit of TTouch on its little tail.

The short-haired black kitten with white boots and chest is really coming around as well. I felt it do a tiny purr as I began doing TTouch on its head and ears and then some clouded leopard and chimp touch on its body. After a while, it rolled over on its back, letting me to TTouch on its little belly. This was the first time this kitten has done this and it felt like a big breakthrough for it.

In these photos you see all three cats getting cuddled up together in their box after receiving TTouch. Though they look a bit annoyed here because I am taking a photo, afterwards they snuggled in and looked like they were smiling. 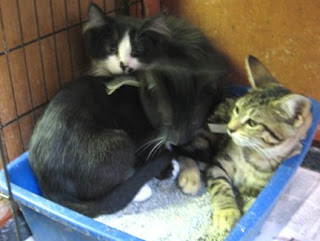 Posted by sarahsuricat at 11:48 AM