Brooklyn and Pals at Whiskers 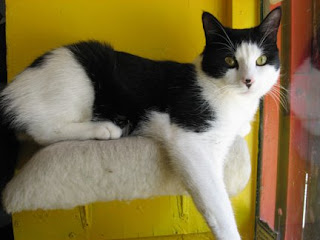 Yesterday I went by Whiskers (http://1800whiskers.com/) to work on the cats in the Rescue Ranch there: Brooklyn, Rascal and Emily.

Brooklyn, who initially was hiding in a cat tent and now loves to sit in the window and watch everyone go by, first greeted me, rubbing against me. I did some TTouch on his ears and around his head, then did some TTouch on his body. He seems more and more comfortable every time I see him and each time I am able to do TTouch on him for a longer period of time, though I am keeping the sessions with him rather short because he gets over-stimulated after a short time, and Rascal also starts asking for attention after a time. But Rascal has been allowing me slightly longer sessions w/Brooklyn each time, waiting a little longer before he starts demanding attention. 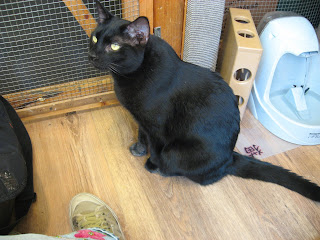 Rascal, wanting me to do TTouch on him instead of take a picture of him!

After I finished with Brooklyn, he went back to his perch to the side of me and kept me company while I did TTouch on Rascal and then, later, Emily. From time to time I was able to do a few circles on Brooklyn. He has come such a long way!

So, next Rascal was at my feet, pawing at my leg and asking me to touch him. I sat down and he plopped right in my lap. He was very excited and started to dig his claws into my legs (I think I'll take a towel to put on my lap for next time! Anyway, he was very pleased for me to stroke his ears, do TTouch on his head, do some zigzags and then clouded leopard touches and/or chimp touches down his body. I was also able to work on the outside of his mouth today, which seemed like a good idea as he can get a little "mouthy" sometimes (not biting, just mouthing once in a while). He was fine with me doing this, and became more relaxed as I continued.

After a while I wanted to encourage Emily to come down from her upper perch, so I lured her down by calling her and tempting her with a little piece of kibble. It took a couple of minutes to convince her to come down but once she was on the lower level she stayed there for the rest of the time I was there. First I did TTouch on her head and body while she stood on a perch at about waist-level to me, then she came down and sat next to me, then finally came on my lap to receive more TTouch. Rascal is her brother and is more dominant so sometimes Emily is shy, but she was quite comfortable and seemed reassured once she felt me touch her. She and Rascal touched noses a few times, and Emily touched noses also w/Brooklyn, which was nice because Rascal and Brooklyn are basically fine around each other but Brooklyn swats at Rascal if he gets too close to him.

At this point, all three cats were very close to me and everybody was very peaceful. Emily then started kneading a nearby cat bed and settled there. Rascal was in the window and as you see below, teased Emily with his tail. 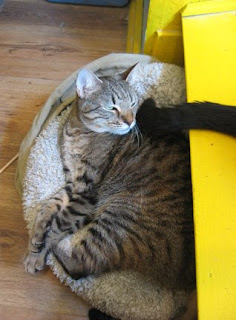 Emily, with Rascal's tail teasing her on the right
I started to get ready to go so I started telling the cats that I would be back soon, but that if they got adopted before I got back there, I hope that everything goes REALLY well for them and that I wish the best for them. At that point Rascal seemed to know what I was saying and plopped into my lap again, putting all of his weight on me and draping his legs over me, trying to keep me from leaving. So I stayed a little while longer, doing TTouch on Rascal and talking to the cats. Rascal seemed a little sad when I left, but I sent a huge feeling of love to all of them. All three cats are sure to be delightful companions for whoever decides to adopt them. If you are in NYC and interested in adopting any of these cuties, stop by Whiskers or give them a call. Rascal and Emily need to stay together.
Posted by sarahsuricat at 11:27 AM