This week at Social Tees

This week at Social Tees http://socialtees.com/ I have been working on some new animals there, as well as continuing to work on other animals there. Below is another photo of the cat who is missing part of one of its hind legs. It is making more eye contact and looking more confident now. It has been lying in the front of the cage instead of the back when I arrive there, and has been continuing to be very receptive to Ttouch. I start out by stroking its ears and doing raccoon touches on its head, then slowly work down its back. When I get nearer the lower back and hindquarters, I use a very light touch as he starts to act a bit flinchy when I get there. Sometimes I just put my hand on that area and leave it there for a while, letting him feel the warmth of my hand. I have also done some abalone touches and chimp touches with very light pressure on the lower back/upper part of the back leg areas. This cat is so filled with love. 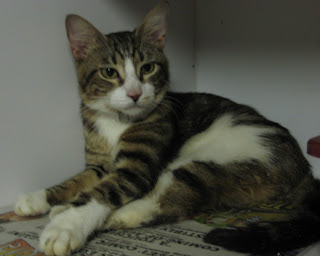 I have also been continuing to work with a grey tabby who is still quite fearful but I am making progress with slow, patient work. The cat now is very receptive to me doing circles and strokes on its head with a feather. She stretches and makes a cozy face when I do this, I can tell she enjoys it. She still gets hissy when I try to do circles or strokes on her back, so I am just sneaking in a stroke or two with the feather once in a while. It does feel like a step forward just to gain her confidence that I am only going to move as quickly as she is ready to move.

I have also continued to make progress with the tabby with a white chest, who used to be in the back of the cage. Now she comes to the front of the cage and meows for me when I get there. I do have to still approach her with caution as well, as she is easily over-stimulated. I open the cage and wait for her to rub her head against me. Then I am able to do circles and strokes on her head with my hand, and sometimes some light strokes down her body with the back of my hand. I have to continue in this way, waiting for her to come to me, as if I reach out and start to touch her on my own, sometimes she tries to bite or swat. Little by little we are moving forward.

Below is an amazing-looking little cat who I have just started to work on. She is a little shy, so I am moving slowly, but she is quite receptive. There is something about her face that really looks kind of human! I look forward to working on her further. 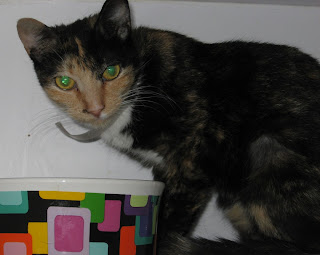 The big orange and white cat below is like an old friend. He is so friendly, he meows for me when I arrive. He loves to receive TTouch on any area of his body, and purrrrrs up a storm. I am hoping he will be adopted soon, as he is just waiting for someone to love him and looks like he would come and just sit on your lap and purr. 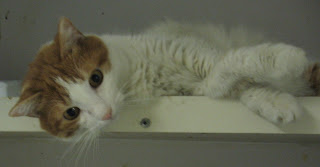 The beautiful cat below is a young Maine Coon. He also asks for attention, and puts his head right in my hands for ear strokes when I open his cage. I have to be a bit careful when it comes to touching his body, as he is easily over-stimulated, but over the past couple of weeks I have been able to make more contact with his body, using chimp touches and llama touches, just doing a little at a time and increasing that amount of time with each session. Someone seemed interested in him today so we'll see what happens! 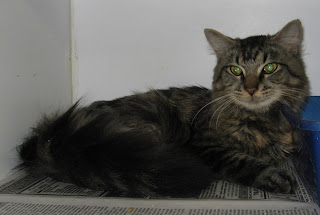 The fellow below is a new arrival, and was very scared when he first got there, hissing and swatting. Now he seems a bit confused - he wants to be touched but gets over-stimulated after a bit. Yesterday he was rubbing against my hand as I did some TTouch on his head and strokes down his body, but then suddenly he hissed. I gave him a break and closed his cage when this happened, but was able to work on him a bit more later on. Today it was quite hot and he was sleepy, and he let me do TTouch very gently on his head and llama touches on his body, and was receptive without one single hiss. 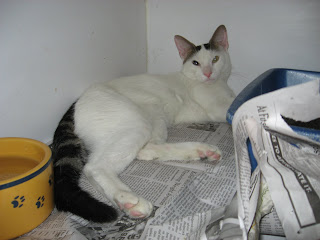 Below is a feral cat who resides at Social Tees who always comes up to me to check out what I am doing. He has the most amazing bright green eyes. 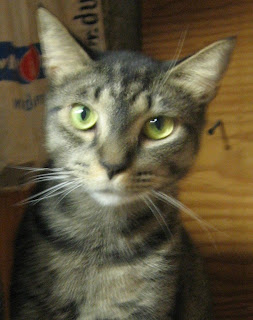 There is an orange and white kitty with long hair who I have also been making slow but steady progress with. Now I am able to start out by doing circles and strokes with a feather and then am sometimes able to touch her with my hand. Again, I am being sensitive to what she is ready for, trying to forge ahead a little bit every time I work with her. She has such soft lovely fur, and I do feel her becoming more comfortable with me little by little.

Below is a little black cat who unfortunately was declawed before arriving here, but has the sweetest, friendliest personality. This is a rather surrealistic picture of me doing TTouch on her. Apparently she had been shy upon arriving, but the first day I worked on her it was like someone turned on the lights in her eyes and body and she just craved more and more attention. As you can see, she is in constant motion, rubbing against my hand. She is looking to be adopted soon, and is comfortable being touched on any part of her body. This is kind of what some of these cats appear like to me when they come to me in my dreams. 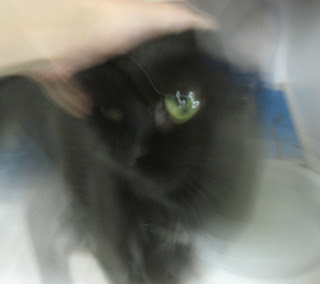 Posted by sarahsuricat at 11:56 PM