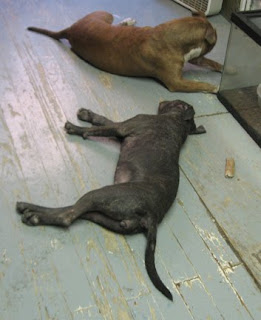 We're finally getting some really hot summer weather, and the dogs really stretch out to take a good nap in the heat.

My little pal Ranger was adopted, hooray! There have also been quite a number of other cats adopted recently there, which is great news.

Below is a photo of the little kitten I worked on the other day who rolled onto its back shortly after I started working on it. Este took this photo when that happened, so ithat's why t took a couple of days for me to get a hold of it and put it up here.

The little fellow pictured below used to be the most shy of four black and white kittens in the same cage, and he has turned into the most outgoing of the bunch. Now when I open the cage, he rubs against my hand and starts purring, nearly coming out of the cage, and he is usually hanging out in the front of the cage. His roommate, a little black kitten (these four kittens are now split into two cages w/2 kittens each), seems to be learning from him and has become increasingly friendly and outgoing each time I work on it. I generally use chimp touch on their bodies and do gentle ear strokes and raccoon touches with 1 finger on their heads. 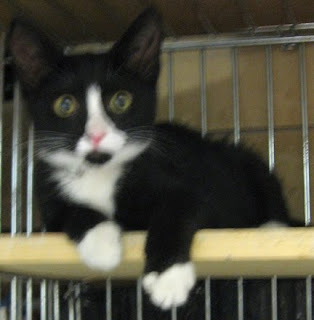 The striped cat pictured below is missing part of one of its hind legs. It has the sweetest personlity, and is filed with love and gratitude. I feel such a deep connection with this cat. I am glad I have been able to spend a good amount of time with it, working on its head to begin with, and then slowly working down its back and down its legs. Sometimes I will work on it a little bit, go work on another cat, then come back to it again, as sometimes it will then be laying on its other side so that I can work on its other hind leg.
It starts to be more sensitive when I get near its hindquarters but is comfortable as long as I go slowly and use very light pressure. I am doing clouded leopard touches, connected as I move down the back. sometimes I just put my whole hand on the lower part of its back and/or upper thigh and keep my hand there just to give the area some warmth. When I am able to touch the leg which is missing part of it, I first gently place my hand up on the thigh, then have done very gentle abalone touches there. After I work on the cat, often I have noticed it eating or moving to a different part of the cage, both good signs. 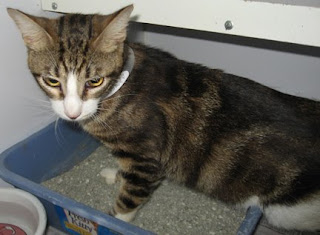 The striped cat who was so scared a few days ago is now hanging out in the front of the cage, meowing to be petted and/or have TTouch done on it. I am so happy for this cat - it had looked so scared and miserable only a few days ago.
Posted by sarahsuricat at 12:47 PM