Saturday at FIDO with Tavi & Friends

Among my many activities, I am a volunteer for Tavi & Friends (http://www.taviandfriends.org/) (as are my friend Marge and some of my other TTouch pals from previous training sessions), and Saturday I was with Mary Bruce, one of the founders of Tavi, at an adoption event sponsored by FIDO of Prospect Park (http://www.fidobrooklyn.org/). Tavi & Friends is an APO (Alliance Participating Organization) and Alliance Supporter of the Mayor's Alliance for NYC's Animals, who provide the microchipping for these events, and Tavi & Friends partners with them to provide the TTouch (or other therapy such as Reiki) for the pre- and post-insertion, as well as any pet owner or "up for adoption" animals at the event.

The first dog who found us was Fanny, who is owned by a man who was there with the folks from FIDO. He has two dogs, Fanny and Jupiter, and Fanny is a therapy dog for him and also goes with him to be a therapy dog in hospitals etc. He had esophageal cancer, and said that Fanny was who kept him alive. I believe this, because this animal just radiates love. Fanny came right up to Mary as if to ask for TTouch, and during the afternoon kept coming to either Mary or me for more TTouch. Here she is pictured below with Mary. 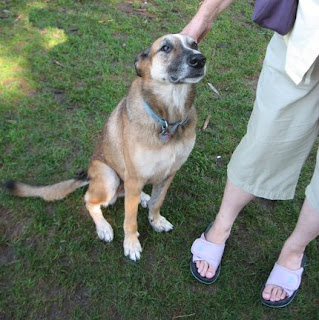 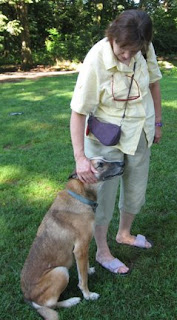 And below is Mary with his pal Jupiter. Jupiter was also a fan of TTouch, and laid right down on the ground when I started working on him, and when he realized he enjoyed it, he also kept coming back to me and to Mary for more. 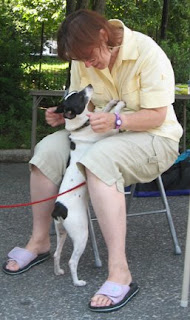 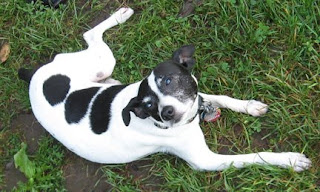 Below you see me with Sugar (the golden retriever who also has Irish setter in her to give her the gorgeous color) and Bentley. Bentley had just been microchipped so the poor guy was a little stressed, but I gave him some gentle llama touches and little raccoon touches under his chin. Sugar was hanging out at the event with her dad with the FIDO folks, and she was happy to receive some TTouch, I did some nice hair slides on her long fur. 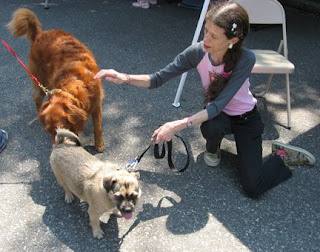 I also worked on a large pit bull named Mama. She is very muscular, which could be intimidating but she is such a sweet dog and found clouded leopard touches on her body to be soothing, as well as some raccoon touches on her head. Here you see her with her owner walking happily into the lovely day in Prospect Park in Brooklyn. It was a warm, pleasant day and I was reminded of how beautiful Prospect Park is, I had not been there in a long time. 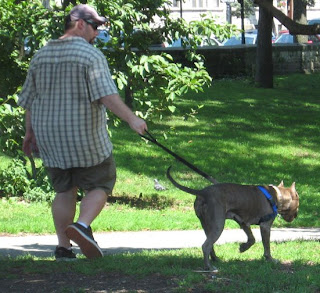 Barbara, the events coordinator from the Mayor's Alliance, was there helping do the microchipping and had with her three pit bull pups, named Pugsly, Moose and Marv, who she is presently fostering. Here you see Mary doing some TTouch on one of them. Could he be any cuter? 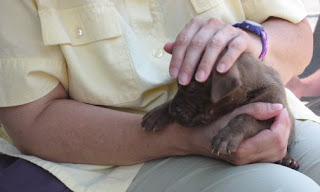 And here I am with Gigi, an adorable Shitzu. She was a bit stressed from the microchipping, but I was happy to give her a more pleasant experience on a table by doing some TTouch on her. Mary put a wrap on her while I was doing some hair slides and clouded leopard touches on her back and some ear strokes. She was standing up when I started and little by little she relaxed until she was lying down and quite relaxed. When we watched her walk away with her owner, she looked so confident and jolly, it was a pleasure to see. 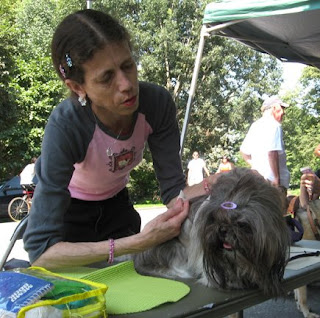 Below you see little Treasure, who is a baby Schnauzer. She truly lives up to her name, AWW. She came to me after having been microchipped and I did some very gentle TTouch on her body and on her ears, as she is a very tiny dog and a light touch was called for. In the picture below you see her after the TTcouh, she is walking with a lot of confidence. 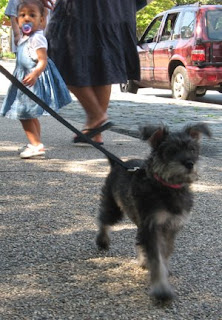 These two guys below just stopped by briefly to check out the literature. They were very striking as each of them had one blue eye and one gold eye, and one had the right blue eye and left gold eye and the other one had the reverse, very interesting. I did a little TTouch on their heads and they walked off into the day with their owner. It was a lovely day and Mary and I enjoyed sharing TTouch as well as more info about what Tavi & Friends is up to. We also were very happy to see dogs and cats being adopted out of the vans at a steady rate. Hooray! 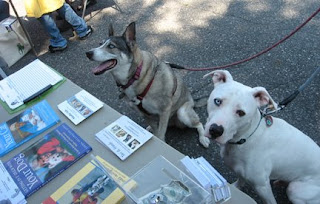