Sunday I went to do TTouch on the gang in the Rescue Ranch at Whiskers (http://1800whiskers.com) in NYC. Rascal, his sister Emily, and Brooklyn are still there and waiting for the perfect person or persons to give them their forever homes.
One of the staff at Whiskers gave me some nice treats for the cats, and Brooklyn (pictured below) came right up to me for a treat and began to rub himself against me. I did Ttouch on his head and very lightly on his body. He still gets over-stimulated with too much contact but he is craving contact much more and has come such a long way. 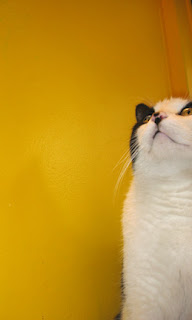 Later on Brooklyn went into the cat tent to rest, but look at how alert and confident he is here, pictured below: 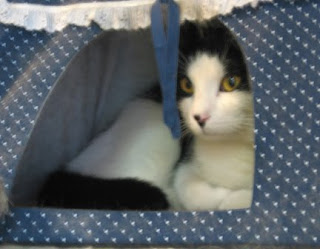 He has come such a long way from when I first saw him. Below he is pictured in a cat tent when I first met him in June, he was very scared and hiding in there:

I am so happy that he feels a lot more comfortable now.
Rascal's sister Emily, a lovely tabby cat, was resting in a cat perch above, and was too cozy to move. One of the staff told me that if the cats seemed tired today, it was because they had gotten out of their enclosure the night before and among other things, had gotten into a lot of catnip! Anyway, I guess Emily was still sleepy from her adventure.
Rascal, however, was excited to have TTouch and came running up to me and plopped on my lap. He did not want to move from there! Below you see me with him. 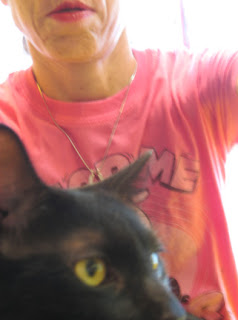 And in the picture below, notice his right claw dug into my jeans! 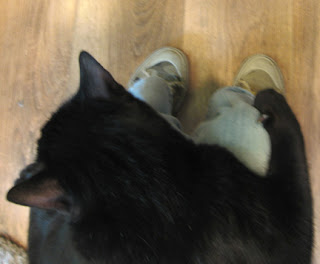 Rascal is a dear cat and he spread himself out on my lap, so I did TTouch on his ears, head, body, even around his mouth. He was purring the entire time. Brooklyn came and sat on a perch nearby while I was doing this and I did some TTouch on him from time to time. At one point a woman came by with a little black dog, and Rascal seemed to want to make friends with him, rubbing up against the screen door where the dog was on the other side. When I finished the session, Rascal did not want to move from my lap, and it was very hard to want to move him because he also had touched me inside my heart! I told all three cats that I hoped the best for them - that I would see them soon unless they got adopted, and if that happens, I hope them the best with their new owners.
Posted by sarahsuricat at 2:50 PM