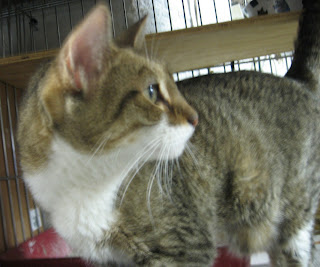 It has been humid and steamy-hot the past few days at Social Tees shelter http://socialtees.com/ making a lot of the animals apt to be very sleepy and stretched out!
The cat pictured above is the one which was huddled in the back of its cage and recently turned around, coming to the front of the cage and asking to be touched. When I come into the shelter, she always comes to the front and calls to me. She is getting more receptive to touch the more I work with her, but I have to still be careful. She craves touch, but is easily over-stimulated. What I have found works well is that I wait for her to rub her head against me, then I do some TTouch on her head and ears and a few Noah's marches with the back of my hand or llama touches on her body. As she is still a bit flinchy about being touched on her body, I have been using the type of brush used for hair-tinting that has a long handle to stroke her body. This gives us some distance in case she starts to want to bite, and also is getting her used to the sensation of something touching her body without it being something so personal as my hand yet. This combination is working well and I am sure that little by little she will get used to my hand on her body as well. 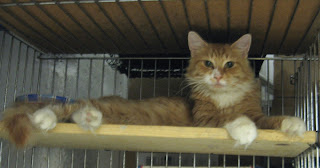 This little darling pictured above is still quite shy. She enjoys being touched with a feather all around her head and ears, so I have been doing that for about a week or so. Last time I was there I had a soft makeup brush with me, the type that one uses for applying blush or powder. I used this to do strokes and circles on her body, as well as a bit on her head. I did this because she is very fearful of being touched on her body, and the makeup brush seemed to be a soft, non-invasive beginning of making contact with her body. So far so good! She is a lovely little cat and I am sure little by little she will become less shy, which will increase her chances for adoption.

The lovely grey tabby kitty above is also still quite fearful, and I am continuing to go extremely slowly and patiently with her, as that is what she asks for. She continues to really respond to feather strokes and circles on her head, and she curls up or stretches out and gets a cozy look on her face when I do this. She is still quite fearful of being touched on her body. Today I tried stroking her body a little bit with the type of hair-tinting brush I mentioned above. She seemed to be ok with this as long as it was only a little bit. Next time I will try using a makeup brush on her body, as a softer brush might be comfortable for her. The advantage the hair-tinting brush has is that the handle is longer than on a makeup brush, which gives the cat and you more space, in case she decides to get hissy or try to swat etc.

The kitty above is a new little calico. She had just met me when I took this picture, which is why she looks a bit skeptical. However, very shortly after starting TTouch with her, she came to the front of the cage, seeking more closeness and touch. I am able to do circles and strokes on her ears and clouded leopard all over her body. Now when I come to the shelter, she comes to the front of the cage and asks for TTouch. 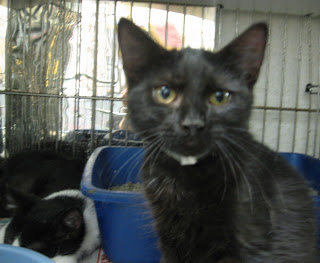 The cute little kitten above is one of a pair of shy kittens (you can see his roommate, a little bw kitten, sleeping to the left). They are becoming less shy though. They still initially pull away when I open the cage and put my hand in, but this is starting to change, and once I start to touch them, they are becoming more and more receptive, starting to rub their bodies against me. The last time I worked on them, I did some tiny raccoon touches on the outside of their mouth and jaw area, and they were extremely receptive to this. The mouth ttouch brought their stress level down and started to make them seek touch more. I had had the same response earlier that day with Kathy's little feral kittens (which I will describe in another post) and so that is what led me to try it. After my session with these kittens, they were hanging out more in the front of the cage, which is different for them. 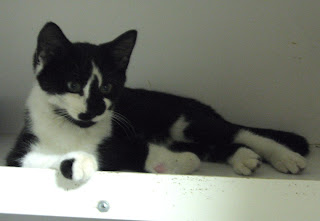 The new little guy above we have decided to call Jigsaw, since the very interesting pattern on his face is like pieces of a puzzle. This kitten has a problem with the bottom part of his front leg, which is limp and he cannot use, so that is why the hair is worn away on his knee there, since that is where he steps on that leg. He does not appear to be in any pain. I did TTouch on his head and all over his body except on that leg, as he is new and has not yet been to the vet so we don't know what is going on there. He really responds to TTouch and it feels as though it makes him aware of his body in a different way. He purrs the entire time I am touching him and calls to me asking for more even after I tell him we are done and close his cage. My heart goes out to this little cat. 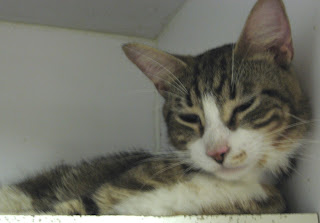 Here is another photo of my pal who is missing part of one of his hind legs. He now is routinely in the front of the cage, which is great, and he meows to me, asking to be touched. I do strokes on his ears and very gentle abalone touch down his body and gentle lifts on his legs. This dear little cat is so filled with love and gratitude. He and the other animals at Social Tees are teaching me so much every day.
PS the Maine Coon cat I mentioned in the previous post was adopted by the woman who was looking at him the other day, hooray! I wish him the best in his new home.
Posted by sarahsuricat at 11:55 PM