Mrs. Patches and her 3 kids 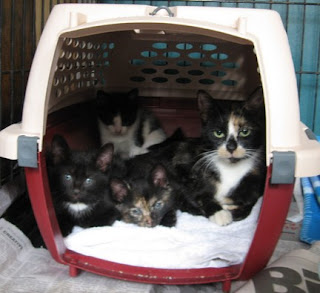 My friend Kathy recently rescued a feral cat named Mrs. Patches and her 3 kittens, pictured above, and she has had me help her to do TTouch on them all and help them to get accustomed to human touch. They will all be up for adoption very soon. This post is a belated report of some work I have done on Mrs Patches and the kittens over the past couple of weeks.
Kathy first caught these kitties about a week ago in the middle of the night and the following day I went to help her do some TTouch on them. Mrs Patches (mommy) was quite concerned, breathing quickly, and so I did TTouch on her first, using the wand and corndog (ace bandage wrapped around wooden dowel). I started out doing circles on her body, starting and stopping and giving her breaks. It was very interesting - one by one the little kittens went to her to nurse until all three were nursing on her. I gave her another little break at this point.
Eventually I did circles on Mrs. Patches' head and stroked her ear with the corn dog. This was what settled her down the most. I also did some TTouch on the little ones, using a feather to do circles on them very lightly. I was still unsure if I was settling Mrs Patches, butI found that once I stopped doing TTouch on them and gave them a longer break, Mrs. Patches encouraged the kittens to all come to another part of the cage, use the litter box and eat. 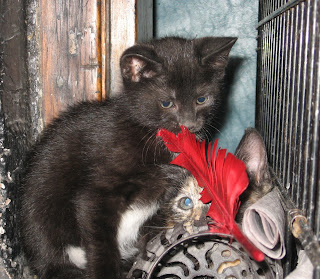 A few days later, I went to do TTouch on them again, this time in Kathy's apartment, where they had been brought a day earlier.
I didn't do too much ttouch on them, just a bit with the feather, and a lot of calming talking to them.
The next day I began doing TTouch on mommy with the wand and corndog. Mommy was lying on top of a small carrier inside the cage. The kittens were running around various places in the cage. She especially responded to circles on the head and strokes on her ears, but also enjoyed circles and strokes on her body. I also had next to me a feather and little paintbrush, and from time to time I did little strokes on the kittens when they came near me. They seemed quite shy at first, but got less so as they realized that I was not going to hurt them and that the touch felt good to them. I gave them all lots of breaks, during which I would just sit quietly with them to let them know that I was going to stay quiet with them. At one point I was able to do TTouch on mommy's head and ears with my hand. She grew a bit startled when she realized I had my hand on her, and moved away, so I went back to touching her w/the wand and corn dog. After another break, I tried stroking the kittens with the corn dog, which they started to really respond well to, as though I was grooming them. Soon after this, they cuddled up with the mom and were intermittently feeding. At this point, I tried doing TTouch on them with my hand and they were completely receptive and did not flinch or move away at all. The mom was completely fine with me touching them and did not react to this at all. She and I continually were blinking at each other throughout this session. When I left, everyone seemed quite calm and comfortable.

When I saw them again a day or two later, they were all still shy but coming along very well. With the kittens, I started out doing TTouch on them using a wand and a corndog (ace bandage), also circles using a feather. I have been able to touch them more and more with my hand. Today I showed Kathy how to wrap the little darlings, using a small dish cloth and loosely putting it around their neck like a cape, with my middle finger and thumb holding it in the front, so they are able to have their feet on the floor but I am able to contain them somewhat. One needs to be sure not to wrap them too tightly around the neck.
They were a bit squiggly at first like this but settled the more I did little circles on them through the towel. I was sitting on the floor with the kitten between my legs. I didn't keep each kitten there long, just a few minutes. The black and white kitten is the most scared but also the most passive and responded most to a very comforting touch. I did circles with my whole hand (abalone touch) which in this case covered most of her body. The little black kitten seemed to especially respond to ear TTouch and chimp touch on its body. The calico-ish kitten is the most skittish so far but responded to TTouch on his head. Mommy is comfortable especially with circles on her head w/the wand and corn dog. 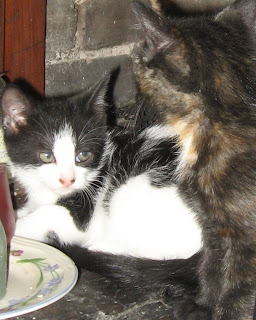 Below you see the three kittens chilling out after TTouch. 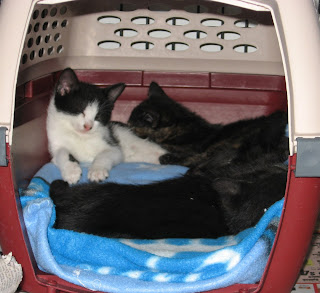 Posted by sarahsuricat at 11:37 PM