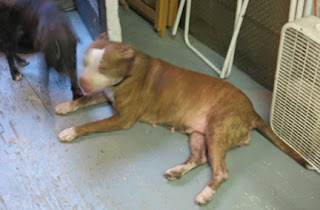 When I got to Social Tees on Monday, I was greeted by a group of lively dogs, all eager to play. Some new ones had arrived over the weekend. I will have to try to get some pictures of the new ones soon - it was a bit difficult at the time as they are in motion a lot of the time. Above is Mama (right) with one of the other dogs. Mama is blind, and is a very wonderful dog.

When I went to the back, the grey cat who had been sitting in his litter box since he first came in about a week ago was sitting in the front of the cage. I was so excited to see him there. He seemed to have broken out from his initial fear and was really craving attention - so much so that he was over-stimulated and began to try to swat after I just did a few touches on him. I went back to Social Tees today, and again he was in the front of the cage and this time he called out to me to pay attention to him. This time, I used the wand with the corn dog (ace bandage) on the end to do circles and strokes on him. This eventually brought his energy level down to the point where he was able to enjoy the touch without his energy getting too riled up. It felt as though he needed to learn how to react to being touched, as though it was a new sensation. I look forward to working on him again soon, it has been such an interesting adventure with him so far.

Yesterday and today I also worked on the orange, long-haired cat who is shy. Yesterday I primarily did TTouch on her head with the wand and corn dog, and a bit on her body. Today I was able to do more circles and strokes on her body than I had been able to do before. I started to try to work up to using my hand on her but as she started to pull away, I just touched her w/the wand. I feel sure that I will work up to contact with my hand in time.


There is also a lovely striped cat, pictured below, who is very frightened. Yesterday I did circles and strokes on her head w/the wand and corn dog. I tried to work my way up to touching her with my hand, but she gave me a swat to tell me she was not ready. Today when I went back, I just settled on using the wand and corn dog on her. She is very comfortable with circles and strokes on her head but becomes frightened and reactive when I start to touch her body with the wand, so I just focused on strokes and circles on the top of her head, along her ears and under her chin. A while after I finished doing this, I looked in her cage and she looked more comfortable. She was resting with her head on her front paws and almost looked like she was smiling at me. I feel so much gratitude from these animals!

I have also continued to work on the young tabby who I mentioned before. He is named "Ranger", as he prefers not to be with other cats (as in the "Lone Ranger"). He has become more and more receptive to touch over the past few days, and almost right away begins to rub her body against my hand. Yesterday before I left I noticed that his stool was loose, so today I made sure to do ear strokes, which can help digestion, as well as some little belly lifts. He really responded to the belly lifts and acted as though he wanted me to do more. When I left today, he was sitting in the front of his cage, which is very new for him.

I also had a lovely breakthrough with one of the quartet of timid black and white kittens. Yesterday the most fearful of them turned a corner and suddenly was purring and rubbing his body against my hand, then coming forward to seek more TTouch. Today when I left, he was sitting right in the front of the cage.

Over the weekend, I went to a psychic fair where I saw my friend Eileen Garfinkel, who is a wonderful animal communicator http://dreamsofamelia.com/. She did several readings for me which were all quite helpful. One of the cats I asked her to speak to was the calico cat at Social Tees who I have had a very difficult time reaching, as she is so extremely fearful. She advised me that this cat would be able to accept distant Reiki, so I will try this and it will be interesting to see what happens.
Posted by sarahsuricat at 2:53 PM