Another report on my further adventures with Kathy's feral cat, Mrs. Patches, and her kittens. They are all coming along, it is just taking time for them to get used to people and to being inside. Especially the kittens are becoming more receptive to touch, and I can touch all three of them now by hand without using the feather as an intermediary step, though the b/w one and calico one are still skittish of this at first. 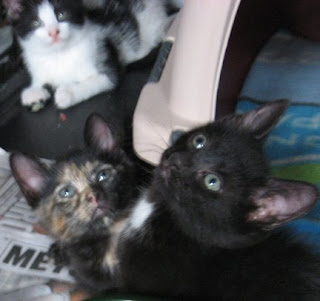 Mrs. Patches still especially responds to circles on the head w/the wand and ace bandage wrapped around the end, and sometimes I am able to touch her on her head and her body with my hand, but this is only for short periods of time.
The kittens I have been taking out of the cage one by one and wrapping in a dishcloth. I had been doing this by putting the kitten in between my crossed legs sitting on the floor but found that they responded more positively when I placed them on my lap as I kneeled on the floor. Perhaps the warmth of my body below them was soothing to them. I still kept the dishtowel only partially wrapped so that I could contain them but they could still feel their feet on me. I also made sure that they could see their mother and that she could see me and the kitten I was working on. The black kitten (who has white on her chest) lets me touch her with my hand very readily now, and sometimes comes to me to be touched. When I took her out of the cage I did not have to wrap her to contain her, I just had a hand in front of her chest and then used my other hand to do TTouch on her. She responded to hair sliedes and abalone touch.
The black and white kitten is the most shy and becomes a bit passive when I hold her and contain her but settles down once I start doing TTouch on her (clouded leopard touches through the cloth), and the calico one is the most squiggly but little by little lets me contain him in the cloth to do TTouch for longer periods of time (abalone touch and clouded leopard through the cloth). 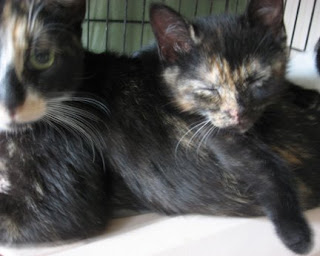 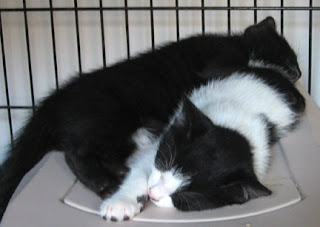 When I had finished the session, I still felt Mrs. Patches to be a bit concerned. I sat quietly and told her that everything was going to be all right, that I was only there to help them and wanted all the best for them. I told her I loved them all very much.
We blinked back and forth at each other, and shortly after this, she went over to start eating ane began to eat with real gusto, and the little black and white kitten, who sticks the most closely to her, also went over to eat alongside her. 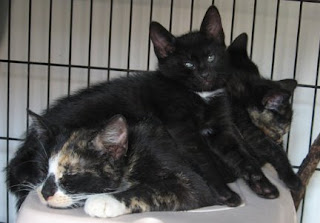 Posted by sarahsuricat at 9:41 PM