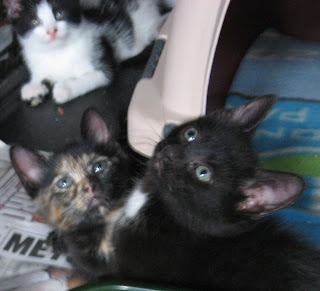 Hi folks, here's an update on Kathy's ferals - Mrs. Patches (pictured at the bottom of this post) and her three kids (clockwise from above pic) - Darla, Bette and Einstein. First of all, it appears that little Einstein is actually a girl :)

Last Friday, first I did some TTouch on Mrs. Patches, who was still shy and squished herself in the back of the cage. She was not resistant to me doing TTouch on her, so I did this for a short while to try to get her to relax.

Then I took Bette out of the cage to do TTouch on her. I did not have to wrap her in the dishtowel this time and she settled very well. I tried some raccoon touches on the outside of her mouth and jaw area, and this quite profoundly settled her to another level. After I put her back, I took Einstein out and did the same thing (although I had to keep her wrapped a bit), with the same result. Unfortunately though, little Bette did a little leap inside the cage, startling Einstein, so she jumped out of my hands and I had to quickly catch her. After I put Einstein back in the cage, suddenly she seemed very sleepy and decided to take a nap. Darla is quite often sticking close to her mother, so I did some TTouch on her within the cage.
Mrs. Patches seemed a bit stressed by all the activity, so I quietly explained to her why I was doing TTouch on all of them, and that I was trying to help all of them. Her paw was hanging out of the cage, and at that moment I touched my finger to the bottom of her paw and felt an amazing connection with her. We stayed there for a while. I tried to see if I could touch the other front paw as well, but this was too much. I finished the session by doing Reiki, picturing a bubble of light right outside their cage, and a couple of kittens who had been inside a carrier within the cage came out of there, and they all went to sleep. Mrs. Patches got on top of the carrier, relaxing with her leg dangling over the side.
Yesterday I went again to work on them, and I took Einstein and Bette out of the cage each separately, and I did not have to wrap either one of them. They settled for a longer time than they ever had before. Again I did raccoon touches around the outside of their mouth area in addition to clouded leopard and chimp touch and hairslides on the body and strokes on the ears, and they found the mouth touch especially relaxing.

Mrs. Patches was inside the carrier with a couple of the kittens. The carrier was turned facing away from me, and so I reached into the carrier and did some chimp touch up and down her body a bit. She was a bit tense but did not try to move away.

I stepped away from the cage to go into another room for a moment, and when I returned, Mrs. Patches was lying outside of the carrier, against the cage. She looked quite relaxed, so I decided to try doing some more TTouch on her. I opened the door and gently put my hand on her body, slowly beginning to do abalone touch. She would have usually moved away towards the back of the cage, but she did not do that this time. She did seem still a bit concerned though and was looking at me and I was afraid she felt tense with me looking at her, so at that point I closed my eyes and continued doing connected abalone touch up and down her body. She then shifted to her other side so I could do the same thing up and down the other side of her back. Every once in a while I would slightly open my eyes, and I noticed her eyes relaxing closed. Her body was also relaxing as I did this, more than I have ever felt before. After this, I was able to do some raccoon and baby chimp touches around the outside of her mouth area, as well as TTouch around her ears. Every once in a while I would tone to her very softly. She was very comfortable by the time I finished. I wanted to work on Darla, but after having this much progress with Mrs. Patches, it felt important to let everyone chill out. Next time, I will make more time for little Darla. Below is a photo of the lovely Mrs. Patches.

These gorgeous, sweet cats are all up for adoption, so if you are interested, please email Kathy at ktyates@gmail.com. 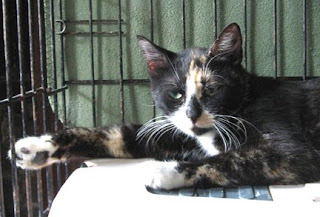 Posted by sarahsuricat at 10:07 AM