TTouch at Whiskers with Dallas, Doc and Leeloo 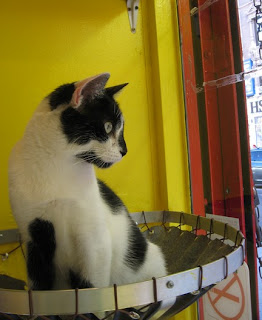 Today I went again to Whiskers Holistic Pets in NYC to work on Doc, Leeloo and Dallas.
Doc (pictured above and below) can get over-stimulated, when you go to touch him, he can react in a bit of a startled way and want to swat. Today I decided to work with him using long-handled flat paintbrushes to see what could happen. It is helpful to work with two brushes, because if they start to play with one brush, you can do TTouch on them with the other brush. I worked on him for very short periods of time, giving breaks and working on the other cats in the meantime. At first he did want to play with the first brush I used but when when I began to do circles and strokes with the other brush, I could see him reacting as though he was feeling something new, and little by little he started to get more settled when I touched him with the brush. I started out by doing these circles and strokes on the body, as he seemed more comfortable with this than getting TTouched on the head. However, as time went on, he got relaxed and a little sleepy and he was comfortable with me doing some circles with the brush on top of his head, around his forehead, and on the back of his head. It was such a pleasure to see him really relax, as he can so often be so ultra-alert and wide-eyed. He is such an intelligent, interesting cat. 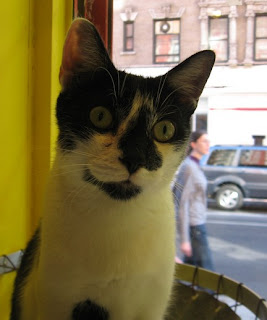 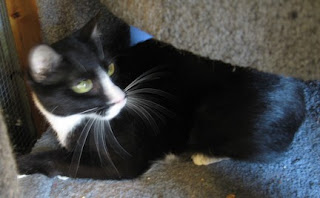 Leeloo (pictured above and below) was extremely friendly and seeking touch at first, pushing her head against my hand to be touched, but can get a bit over-stimulated after a while, as she told me with a swat after a while that she had enough. I gave her breaks, and I mostly did TTouches on her using back surfaces of my hand or fingers. She was hesitant to have me touch her in the area of her lower back. She's very sweet though, and mostly was very responsive to touch. I did chimp touches, llama touches, raccoon touches on her forehead and on the outside of her mouth. 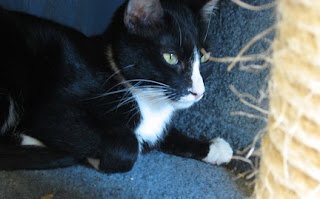 Dallas, the little tabby below, is a bit more shy than the other two, but extremely gentle and sweet, and once I started to work on her, she came down from her perch to get more TTouch. She also was a bit sensitive and tigh around her tail. She was most responsive to abalone touches on her body. 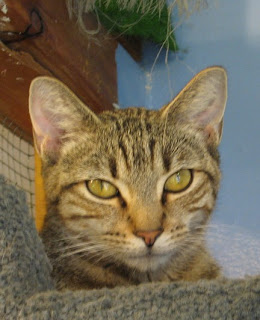 All three cats came down from their perches during the time I was there to either eat, drink water, or just get closer to me. Doc brushed by me and seemed to seek further contact, but I was a bit careful not to do too much with him at one time, and did a few strokes with the back of my hand down his back as he walked by me. Dallas drank quite a bit of water from the little drinking fountain they have set up in the enclosure after she received TTouch. And little Leeloo came down to get some food and some water.
I look forward to working on these three further, they are responding very quickly and I'm interested to see what can happen next.
Posted by sarahsuricat at 5:13 PM