TTouch and Reiki in the Cat Loft at BARC - Sept 18 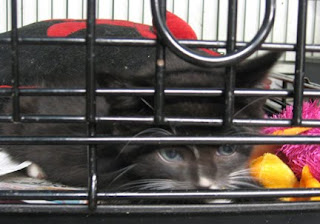 Above is one of the adorable kittens they have at BARC shelter in Brooklyn, where I have been going a couple of times a week to offer TTouch and Reiki to the cats there. 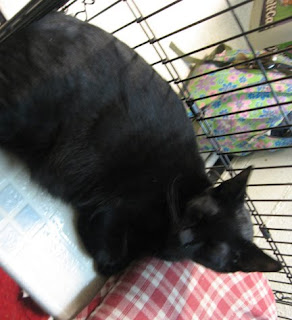 The two young black cats I have been working on a lot, Mittens (above) and Muffin (below), are continuing to really come along. Muffin, who has been the more shy of the two, is getting more and more comfortable being touched, and is not so startled when you first touch her. Mittens now will purr a lot when you touch her and wants to come out of the cage. Muffin may take a minute to become accustomed to your touch, but she settles right in pretty quickly. She especially responds to abalone touch (circular touches with the whole hand), which can be very comforting, and raccoon ttouches around the mouth area, which can sometimes be a key area for relaxing a nervous cat. 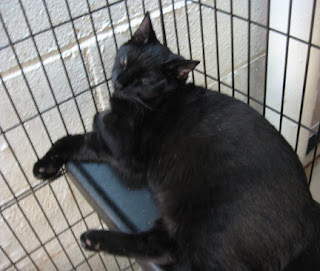 Cher (below) is also really coming around - though I realize she looks skeptical in this photo! She usually responds to people reaching their hand towards her by swatting at them. I have been working with her using two long-handled brushes, which I think are used for putting sauce on barbeque. so if she starts to attack one brush, I can do circles and strokes on her with the other. This time I ended up not even using the brushes, as she came to the front of the cage for me and began to rub her head against me. I did strokes and circles using the back of my hand on her body and a few chimp touches on her head, and she stepped right out of her cage and onto my lap. I think she was a bit startled to find herself there!
She can be unpredictable and sometimes go from friendly to swatting, so I was careful to stay pretty still and just give her a few touches while she was there, and only as she moved towards me to receive them. As they didn't want her to get loose in the shelter, I encouraged her to go back in the cage after a few minutes there. I came back to her later and did a bit of TTouch on her again, and again she seemed to want to come out of the cage. I think this was a good breakthrough for her. 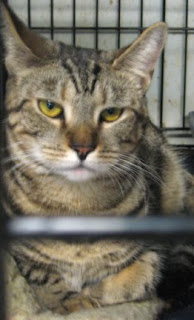 I also worked again on Baby (below), who is shy but very sweet. She is extremely sensitive and so I needed to go slowly and gently, as she is ultra-sensitive in some parts of her body. She is very comfortable being TTouched on the head and less so as you go towards the back end of her body. I did Reiki on her for a while, and she really settled with me as I did this. I could feel her relax as she was absorbing the energy. 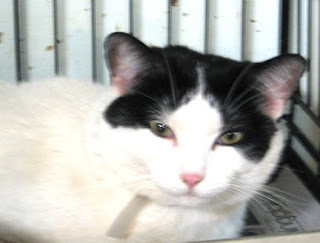 Patches, the lovely tortie cat pictured below, is also really coming along. When I first started working with her, she could only take a very little bit of TTouch at a time and then would tell me that was enough with a meow or swat. I have been working on her just a little bit at a time, giving her breaks. Today I began as I usually do, doing TTouch on her head and around her mouth area and she was extremely receptive to this so I began to work in a few TTouches going down her body and then going back to the head. She got more and more comfortable and really stretched out her back. I started doing a circle and then a long stroke with the back of my hand down her body, on one side and then on the other, and this was very relaxing for her. I did this whole procedure several times when I was there, and was able to work with her a little longer each time.
There are a number of kind, dedicated staff and volunteers who also help in their own individual ways to help socialize the cats. A big thanks to these folks! And I look forward to going to BARC again soon. 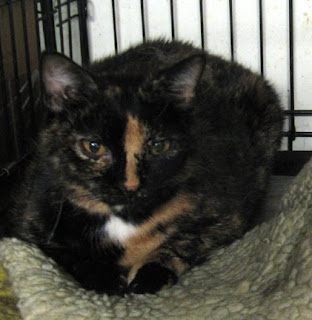