TTouch and Reiki with Macduff and Misty: Sept 14 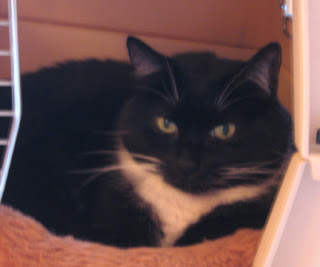 I went again to work on my friend and animal communicator Eileen's cats Macduff and Misty. They are still mostly keeping quite separate from each other and Macduff can still be moody, but they are making some progress being near each other without incident. There are better days and worse days, but in general, Macduff is starting to go back to places which he previously liked but he had been avoiding for a while, and he is able to have Misty be nearer to him or go in places that are usually his places without putting up a fuss (or less of a fuss). Misty still is having digestive issues, which have been treated homeopathically but Eileen is going to consult a conventional vet as well very soon.
Macduff was acting quite sensitive today. Though when I said hello to him, he stretched out and relaxed, he was reluctant to be touched other than a short spurt of TTouch on his forehead area. I gave him a break, and then decided to see if he would accept Reiki from a couple of feet away. At first his tail was twitching, but the twitching slowed until it stopped, then he put his head down and closed his eyes. I could feel light and energy passing back and forth and felt like we really connected, and that he was able to relax.
With Misty, I began by doing raccoon touches on her head area for a bit, then gave her a break. When I came back to her, she was in a sleepy mode and was on the cat perch as shown below. She was very comfortable with me doing very slow abalone TTouches on her body. She is so sensitive that I used a very light pressure with her, just barely enough to move the skin around in a circle. I did a pause at the end of each touch, and reminded myself to slow myself down and to keep the touches slow. She was comfortable with me doing these TTouches on her for a much longer period of time than is usual for her. I felt her back stretch out and her body really relax. Below you see her afterwards, taking a nap.
I really enjoy working with these two and they are continually reminding me to be patient, to stay in the moment and to truly meet them where they are. 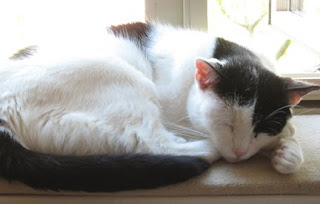 Posted by sarahsuricat at 5:03 PM