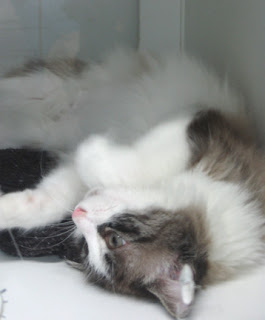 Irene (above and below) was waiting at the front of her cage for me, doing a little silent meow. She is getting so much more comfortable being touched, it is very sweet. She is still a little shy, but she is really coming around. I did llama touches (circular touches with the back of my hand) on the sides of her body, followed by straight strokes (Noah's march) using the back of my hand to connect the touches. I also did mouth TTouches and ear strokes. She became extremely comfortable and laid on her side and on her back, which is a new level of comfort for her. I also did a little Reiki with her, which she was very receptive to, she really responded to the warm energy. 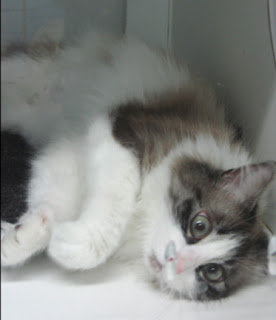 Ziggy (below) is such a dear kitty. He always waits at the front of the cage with his nose sticking through as pictured below. He walked back and forth rubbing himself against my hand. As he did that, I did Noah's march with the back of my hand, then clouded leopard ttouches and zigzag ttouches which I did with more pressure and fingers angled so that it was more of a scratching motion than a ttouch, as he really responded to this variation. I also did a few ear strokes on him, which he enjoyed. 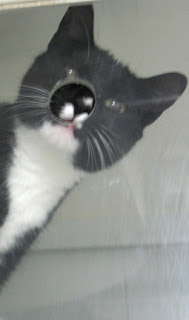 Next is Vaska (below). Vaska always gets very excited to have attention, and meows to let me know that. I let him out of the cage to give him TTouch so he could also roam around a bit and stretch his legs. He laid down next to me as I sat on the couch for a while as I did ear strokes, chimp ttouch, llama ttouch and abalone ttouch. I tend to use touches with the whole hand (llama and abalone ttouch) and/or with the back of the hand (chimp and llama ttouch) because I feel he needs more calming energy rather than more stimulating energy. 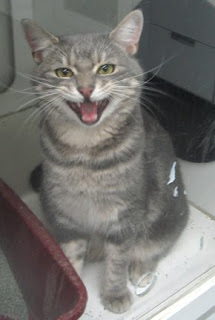 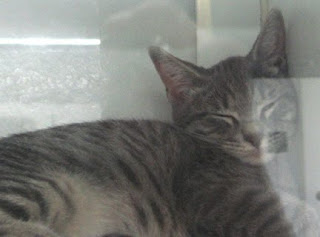 Next are Sunnie (above) and Shadow (below), two irresistible little gray tabbies. First I took Shadow out of the cage, and he is one of those unusual kittens who enjoys being cradled in your arms like a baby (with the belly facing up). Most cats are not comfortable in that position, but he really settled into my arms as I did ear storks, mouth work, and he really settled as I did little raccoon ttouches all around his paws. This is a great ttouch to do especially on kittens to get them used to touching their paws at an early age so that when you try to clip their nails, they can get used to that as part of something nice that happens to them. You can do a little TTouch, clip a nail or two, do a little more ttouch, etc. Of course, it is great to be able to do this on a full-grown cat as well, but it may take a while longer for them to be comfortable with you touching them there, so it may have to be done gradually.
Next I took out Sunnie. She is also a very well-socialized kitten, actually more outgoing than Shadow. I did zigzag ttouches, ear strokes and a variation of the octopus ttouch which is kind of like a zigzag ttouch but done with both hands crisscrossing. This is a ttouch only to do with a cat or kitten who is EXTREMELY comfortable with you. She was purrrrrring the entire time. 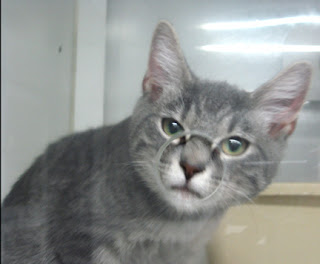 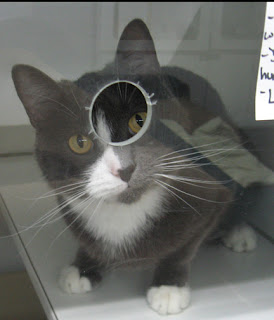 Next is Smoky (above) and Oreo (below), who are best pals and cagemates. Today Smoky came out of the cage and I kept her out by herself as her pal Oreo is generally an attention hog so this was a chance to get in some good TTouch w/her. She is a very gentle, sweet personality and I feel so much gratitude from her when I spend time with her. She laid on her side right against me as I sat on the couch. She really relaxed there. I did slow chimp TTouches, llama and abalone ttouches, as well as ear strokes on her, and she was very calmed by it.
Oreo is a dear cat as well but I use a different approach with her than with Smoky, as Oreo can get over-stimulated - so I do a little bit at a time with her, focusing on touches on her head initially, then working in ttouches on the body. 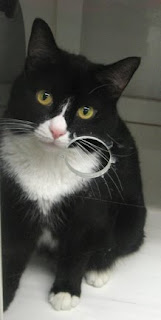 Below is Diego. He may look a little tentative in the photo, but he is really a sweetheart -- I think he is just camera-shy.
Diego came out of the cage and settled on the floor right next to me. He responds most to slow abalone ttouches with a pause at the end. I also did some slow zigzag ttouches from one end of his body to the other, going all the way down to his paws. I also tried a few belly lifts with him. He seemed extremely comforted by the touches and he kissed me and head-bumped me. 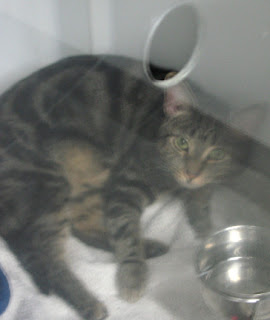 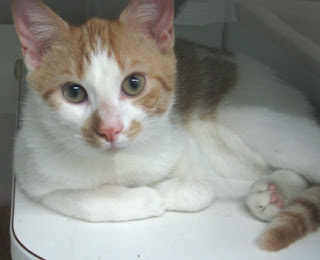 Last are Rascal (above), Buster (spotted cat below) and Ophelia (calico at bottom). These three youngsters are about 5 months old, I would guess, and are in a cage together. They are very social and sweet. Ophelia is more hesitant to be held than the other two but is fine being TTouched, so I did TTouch on her while she was in the cage. The other two I took out separately and sat on my lap while I did TTouch on them. All three of them never stopped purring!
Love to all these kitties and may they be adopted soon. 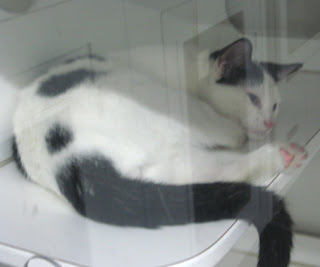 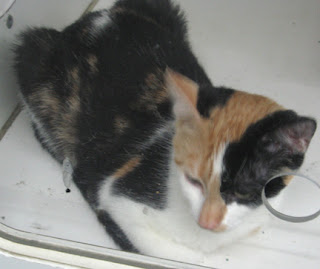