TTouch and Reiki with Macduff and Misty 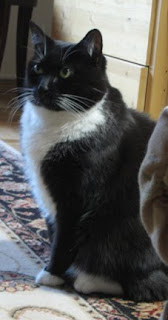 I went again to work on Eileen's cats, Macduff (above) and Misty (below). Macduff will often be OK with Misty resting in fairly close proximity to him, but he still can get hissy and swatty with her when she tries to engage with him or if she gets closer to him than he is comfortable with. Meanwhile, Misty is being treated for IBD (Irritable Bowel Disease). She seems like she would would enjoy being able to engage in play with Duff but since that doesn't seem possible right now she is content to hang out on her own, and loves to nap in the window perch. 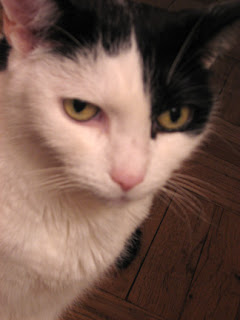 Macduff was initially in his carrier, so I first offered him Reiki sitting just outside of his carrier. He was receptive to this and started to look very relaxed. After a few minutes, he came out of his carrier, as Eileen was in the kitchen, so he wanted to see what was happening there. After he had a break, he settled under the dining room table, which is one of his comfortable spots. I sat alongside of him and had my hands open and began to offer him Reiki. I started to really feel the energy flow out of my hands, and felt him become very relaxed as I felt him absorbing the energy. My hands were really buzzing. We stayed here for quite a while, in a bubble of calm energy. I wondered if I might touch him very gently, so I did a few strokes on the back of his head with the back of my fingers, and a few chimp TTouches on his head. I didn't want to push the issue too much, so just did this for a very short time. Later after he had a break, I tried to see if I might touch him but he swatted and so I let him be. 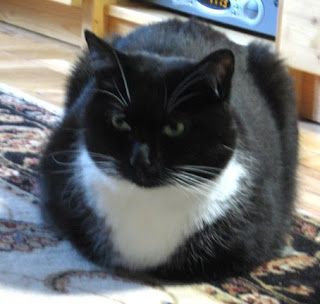 Misty was a bit restless, which seems to be usual for her. I did a few TTouches on her here and there, but initially she wasn't interested in settling. She can be ultra-sensitive to being touched and often does not want to be touched for more than a few seconds at a time. After a while, when she was settled in her window perch, she became very relaxed and, like last time, I did raccoon TTouches on her forehead and abalone TTouches on her body. She was very relaxed while I did these TTouches and didn't try to run away as she sometimes does. I was speaking to Eileen as I did this -- and perhaps the conversation made her feel relaxed as well. She seemed very content as I did these gentle TTouches on her.
Eileen and I will be taking a Bach Flower remedy class soon -- it will be interesting to see what remedies might be good for these two dear cats. I hope that over time, Macduff will be more relaxed about having Misty in his home and realize that she really does not want to take over, that he really is still truly the king. Of course, Eileen reminds him of this all the time, but I guess it will take him a while to really feel sure. 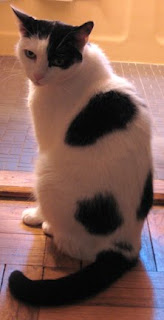 Posted by sarahsuricat at 9:53 AM