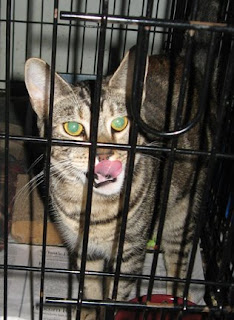 Today I went again to work on the cats in the Cat Loft at BARC shelter in Brooklyn. The lovely girl pictured above is named Cher. This is not the most flattering photo, I'll have to get a better one next time I go! I happened to snap the photo when she was enjoying her food. She can tend to swat, so I used a tool which looks like something probably used to brush sauce on a barbecue - a metal rod with a brush at the end. I did some circles and strokes on her body with this, and her reaction was very interesting. I could tell she was experiencing a new sensation. She seemed to enjoy being brushed and stroked a bit with it. She is very sensitive so I just did a little bit, then stopped and closed her cage, then started again. She did want to play with it after a while, so I should try again with her using two of these so she can play with one while I do circles and strokes on her with the other. 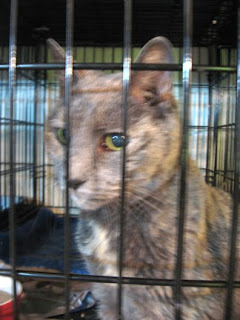 Pictured above is Mrs. Skeffington. She is a gorgeous, sweet senior female cat. Her fur is very soft and she is very gentle and sweet. I did circles, strokes and some zigzag touches on her back and she really responded to these, she became quite relaxed and settled. I also did some Reiki with my hands near her lower back. As some animals do, after finishing my session with her, she was thirsty and went to drink some water. 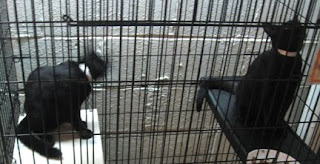 I again spent a good deal of time with the two semi-feral youngsters pictured above, Mittens and Muffin. Every time I see them, they are more and more comfortable being touched. Before I tell you about that, below are a couple of pictures of Mittens checking out a picture of a cat :) 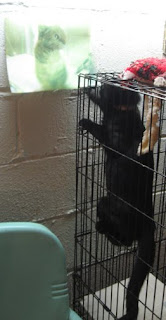 When I approached their cage, Mittens (below) was lying with her face against the cage. I wondered if she would let me touch her, so I tried doing a few small circles on the side of her face with my fingernail. She responded to this and so I did a little more on her this way, then opened the cage and little by little, I found that I was able to do TTouch on the outside of her mouth, the base of ears, and then clouded leopard and chimp TTouches down her body right down to the base of her tail. She laid down on her side and started to rub her face against me a bit, she got very relaxed! I then did some circles and strokes on her cagemate Muffin with the long handled paintbrush I have been using, At first Muffin wanted to play with the brush, but then as she got into it she was very responsive to having circles and strokes done on her back and she stretched out. I worked on these two several times while I was there, giving them breaks in beween. Later on, I was able to TTouch Muffin with my hand as well, but for a shorter time. Mittens got more and more comfortable being touched with my hand as the day went on. 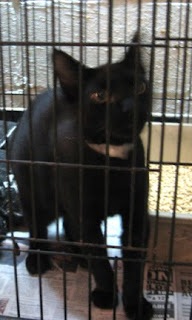 Below are Marie (left) and Mike (right). They are two darling kittens. 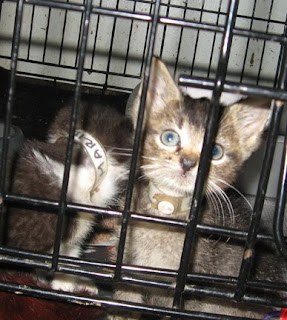 In the picture below it looks like Marie is the vocal one, but it is actually Mike who will squeek to let you know he would like some attention. They are both very dear. I took them one by one out of the cage, staying near the cage so neither one remaining would feel too neglected. Then I did little circles on both of their backs simultaneously while they were in their cage, and they began to vigorously chomp away on their wet food. It was very cute! but it was also another example of the many times when I have seen TTouch prompt a kitten or cat to eat, which is great. 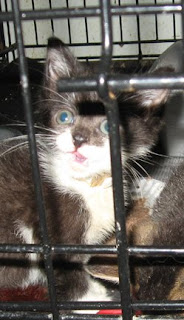 The gorgeous sweet girl below is Gary. She looked at me as though she wanted some attention and so I did some chimp TTouches on her head, and then some abalone touches and chimp touches on her body. I did these all at a slow tempo and as you can see here, she got very relaxed. And, as happens sometimes in the moment of a real heart connection
between me and the animal, I felt tears well up in my eyes - and I let her know that she was ok, she was safe, that she is loved. As I am writing this post a bit after the fact, I am able to share with you the lovely news that sometime in the next couple of days she was adopted! 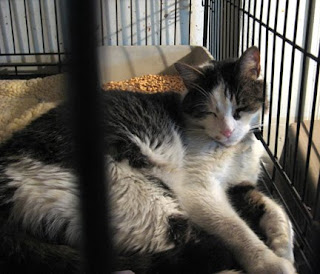 Posted by sarahsuricat at 12:24 PM