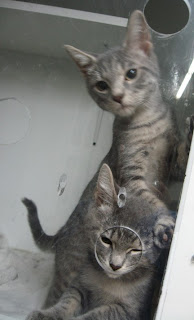 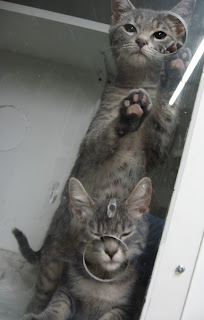 Above you see Sunnie squishing her brother Shadow. These two are both extremely friendly and responsive to TTouch. As you see in the photos, they wait at the front of the cage for me to take them out. They really are so dear!

I took them out one by one to do TTouch, holding them on my lap. They both purred the entire time. They particularly responded to ear strokes, clouded leopard touch on their body, and tarantula pulling the plow TTouch (I will have to do a video of this TTouch, it is easier to show than to describe!). They were both so reluctant to be put back in their cage, and I took them each out a couple of times as they were so irresistible. 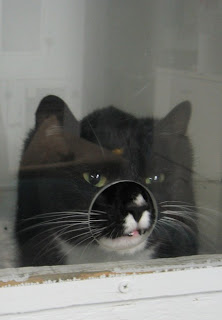 Ziggy (above) is quite a character, he also comes to the front of the cage and puts his little nose thru the hole, waiting for me. I primarily did zigzag TTouches on him as he walked back and forth, rubbing his body against my hand. 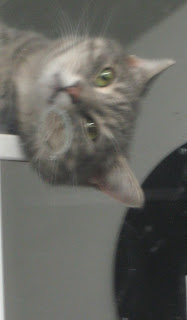 Vaska (above) has such a sense of humor, as you can see by the photo. He always manages to put himself in a funny position and then gets my attention by meowing to me. He was very energetic and so I let him out of his cage. He rubbing himself against me and stretched out on his side. I did clouded leopard TTouches on him, chimp TTouches and a range of other TTouches while he was out of the cage. 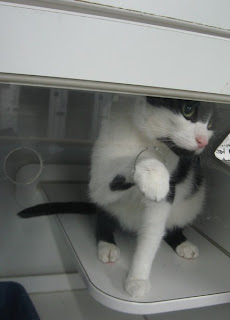 Zorro is a sweet guy as well. He especially responds to sssllloooow zigzag TTouches down his body and then connected abalone TTouches (circular TTouches using the whole hand). Often I hold his body against my leg as I do the abalone TTouches on the opposite side. 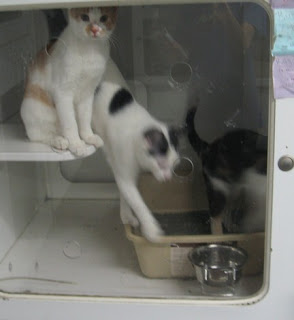 The three young rascals above, from left to right, are Rascal, Buster and Ophelia. They all wanted to get out but I let them out one by one to do TTouch on them. Ophelia mostly was in a mood to play, but Buster and Rascal both settled on my lap for some TTouch on their body, and ear TTouch and raccoon TTouch on their heads. They are very sweet! 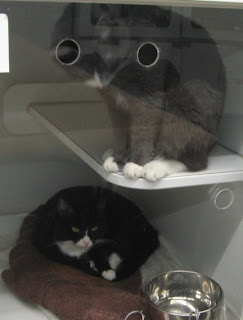 Above are Smoky (top) and Oreo (bottom). Oreo can get over-stimulated sometimes, so I generally do TTouch on him for very short bits of time, but Smoky can take a longer TTouch session, as he is a very gentle personality and the TTouch really relaxes and settles him.
I didn't get a good photo of Diego this time, but he is a stunning tabby with a swirly jungle pattern. His favorite TTouches are hair slides and very slow abalone ttouches with a pause at the end. He relaxes, stretches out his back and purrs like crazy as I do this. 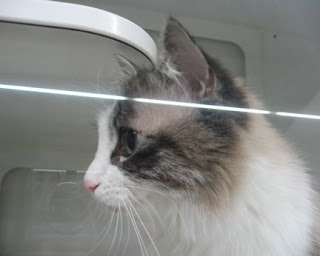 Above and below is Irene. She was purring the whole time I was working on her, and was waiting at the front of the cage for me, giving me a litttle meow. She actually was the first cat I worked on today, but I worked on her several times while I was there. She was really craving attention, which I was so happy to give to her. She still backs away a little when I initially put my hand in, but I am starting to think this might be due to a lack of depth perception as she is cross-eyed. She is now more and more comfortable with TTouches on her body, whereas initially she had only wanted me to do TTouch on her head. I did abalone, llama and zigzag ttouches on her body and chimp ttouches and raccoon ttouches on her head. I tend to still do a fair amount of ttouches which use the back surface of my hand, so as not to startle her.
These kitties really have crawled into my heart - I look forward to seeing them every week :) 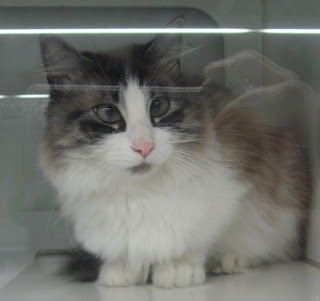 Posted by sarahsuricat at 5:30 PM