Today I went again to BARC shelter out in Brooklyn to work on the cats.

Below is one of the resident cats who is quite a character, Cody. He loves to come and sit on your lap. You do need to watch his body language though, as he can get over-stimulated with too much attention, so a short time span with him is ideal. He is really a sweetheart though. 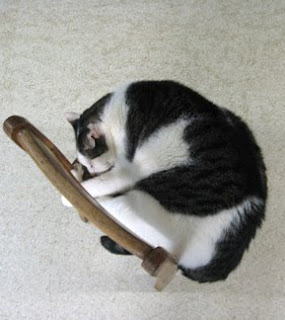 Mrs. Skeffington, pictured below, is a dear senior kitty. She especially responded to ear TTouches and clouded leopard touches, she really settled and stretched out as I worked on her. 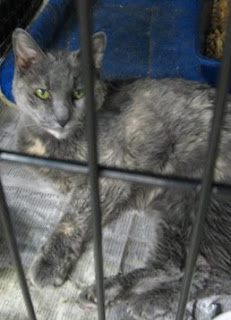 Patches seemed a bit under the weather today, and not really in a mood to be touched, so today I did Reiki on her, keeping my hands about five inches away from her. She really started to relax as I sent Reiki to her in this way, and contentedly went into a Reiki nap. 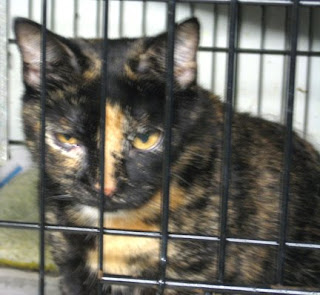 I also worked on kittens Teddy (below) and his cagemate FDR (the grey and white kitten pictured below Teddy. Again, FDR was more shy, but they both are becoming more comfortable being touched. I tood them out of the cage one by one, sitting in a chair right by the cage so they could just jump back in if they wanted to, but they each settled in and stretched out on my lap as I did some clouded leopard TTouches down one side of the body and then the other, and some quite firm ear strokes going from the base all the way out to the tip of their ears. 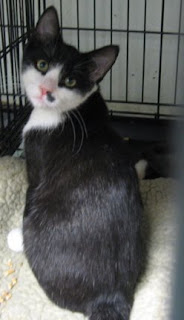 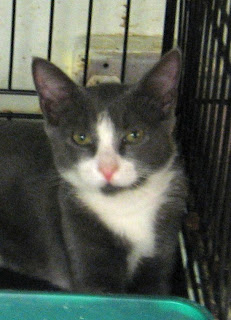 The kitty pictured below is Pan. He is one of the cats loose in the shelter and I didn't get around to TTouching him today, but he is a very sweet guy and, as you can see, very handsome! 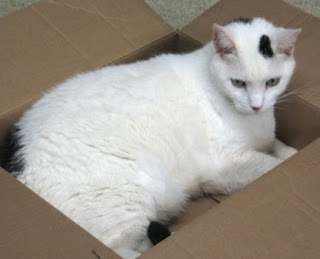 Mike and Marie are two dear little kittens. Below they are sniggled together, and you can barely see where one begins and the other ends, it looks almost like a two-headed kitten! They are very bonded with each other and extremely friendly. They respond to ear TTouches, mouth TTouch and raccoon or clouded leopard ttouches on their bodies. 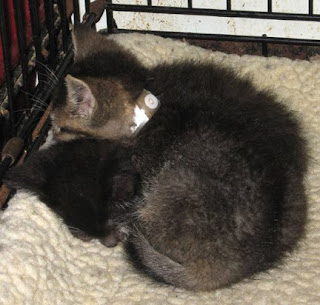 Below is Clarice, who, as you can see, got quite sleepy after some TTouch and her cagemate and pal Billy Joel was also quite responsive. He initially was towards the back of the cage but once I started to do a few strokes with the back of my hand down his body, he came to the front of the cage for TTouch, and I mostly did strokes and circles down his body as he walked back and forth, rubbing himself against my hand. 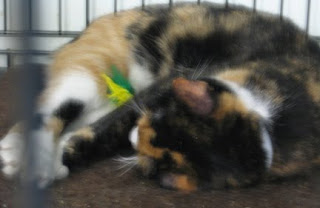 I also worked again on Cher, who I need to get a good picture of. She is a tabby with very striking markings who can really get worked up easily, so I have been using two long-handled brushes that look as though they are used for putting sauce on barbecue - long metal handles with a brush on the end. As she becomes engaged in play with one of the brushes, I do circles and strokes on her body with the other brush. Little by little I am able to do a bit more work on her with this technique.
Thanks to all these wonderful animals and I look forward to seeing tham again.
Posted by sarahsuricat at 1:27 PM