A Thanks to the Animals who Heal Me

I have to take a special moment to thank all the animals in my life for how much my connection with them has been healing to me. They give me so much every day (and of course a special thanks to my own cat Garbanzo)!

This past Saturday was a case in point. We were having an adoption event for Social Tees and I had a sore throat and was feeling a bit achy and like I was fighting a bug of some kind, but I went over to the event at least so say hi and see what was going on.

Below is a dear little tortoise-shell cat who I have been working on lately. She was initially very shy but has really come around. and I have given her special attention lately because I had to put some cream on a little abrasion she had on her tail. I saw her in the van and she was being so cute and kind of silly, sitting inside a metal ring generally meant for a water dish. Here she is looking right at me, aww! 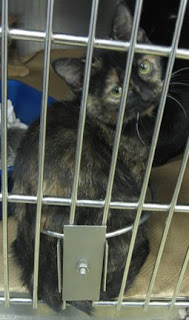 This little darling was adopted this week by a very kind young man - they seemed to bond with each other instantly, and she was very comfortable sitting in his lap and being petted right away. She came a long way from the scared little kitty she was just a short time ago. I wish her well in her new home.

Below is the lovely calico friend of Carrot Top. She looked so peaceful as she took a nap in the van, it was cozy and warm in there. She and Carrot Top were adopted this week as well by two young women, so good luck to them too. 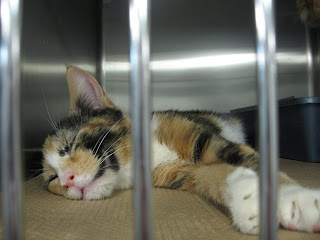 After visiting with the animals in the van, I needed to go back to the shelter to give eye medication to some tiny little kittens we have there. I try to make this event a more pleasant one by combing and cleaning the kittens, doing ear strokes and other TTouch on them while I have them out to give the eye drops. They really are quite cooperative, and they all want to come bounding out of the cage when I open it. The interesting thing is that they sometimes seem to have a sense of taking turns, as the last kitten who I need to give eye meds to (and I go in a different order each time) will often come to the door on its own, seeming to know that it's his or her time out with me. The mom cat and all her five kids are all completely socialized and hopefully in a couple of weeks they will be ready for adoption.

And below you will see two pictures of my pal Jesse James, who is coming around more and more. Other volunteers in the shelter who used to be a little afraid of him are now able to pet him and sometimes he will even give them a kiss!

You can see how happy he looks below. I am able to touch him on all parts of his body now, though I do have to be a little careful around his mouth area as this can be a little iffy still. I think he just gets nervous when there is too much going on and if there are larger dogs in the shelter - he seems to generally get along with dogs around his own size.

At the end of this day, when I was back in the shelter, Jesse came up to me like he often does and puts his paw on my knee, as you see in the picture below. This is his signal he wants to be picked up to sit on my lap. Of course I was happy to do this! He is now very comfortable in my lap and ready to receive TTouch there. He gives me kisses there as well. What a great little guy. I have also been teaching him (using treats) to sit on command. This is challenging for him and sometimes I have to just wait for him to sit, as he will often first try to jump up to get the treat, but ultimately he realizes what he needs to do and he sits and receives the treat.

So by the end of this day I had just about forgotten that I had been feeling so lousy in the beginning of the day. My body aches and sore throat had totally gone away. I have to thank the animals for that! 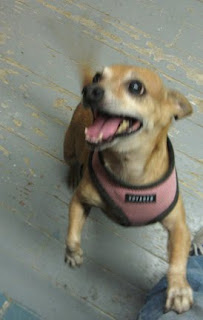 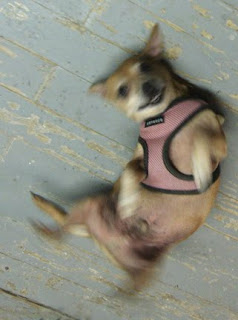 Posted by sarahsuricat at 1:16 PM