When I am doing TTouch on animals at the shelter, I have to remind myself to continue to breathe and to try to keep my body position as un-stressed as possible, as sometimes our idea of "concentrating" is to tighten up :)

I wanted to first show you this picture of Stuart from about a week ago. 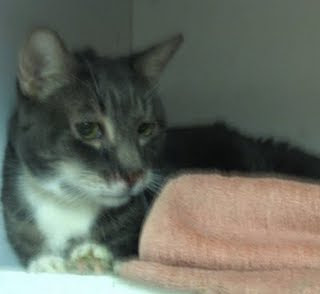 and below is a more recent picture of him. Though it is stil hard to get a really accurate photo, as he is a bit camera-shy, his face looks very much clearer and less sad in general. He is a really handsome cat! He is feeling a lot better as he recovers from his cold. Last time I mentioned that this also meant a return of some feisty behavior, but my work with him using a paintbrush has been very productive. He now looks forward to me doing little circles on his face as well as some strokes down his body with the paintbrush. I will get back to touching his body with my hand soon, but I do not want to push it too fast, as he is enjoying being touched with a bit of distance between me and him. 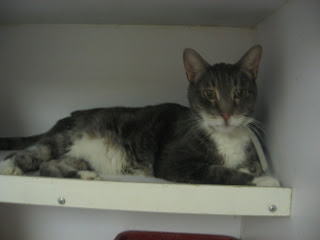 The shelter has been extremely busy as we have had a recent influx and are full to the brim with both cats and dogs. Some of these dogs can get a bit overstimulated with all that is going on, and the barking can be really stressful on the cats. I do find though that once I begin to do some TTouch on one animal, the general energy in the room quiets and usually the barking stops.

The kitty below just came in a couple of days ago. It had bad diarrhea when it first arrived so I really wanted to help clean him up. He hissed and growled at me initially, so I was not sure what would happen. I spoke to him gently and tried touching the top of his head with the back of my hand. I did this while watching his body language very carefully and would not have touched him if I saw any sign of potential biting etc. He did not resist and so I began to do small circles on his head with the back of my fingers (chimp touch), very gradually working up to doing strokes down his body with the back of my hand. After a bit, he came off his shelf to the front of the cage and began to rub himself against my hand. At this point, I was able to take a damp paper towel and gently clean off his back end and legs, which were soiled from the diarrhea. Quite often, I feel that animals sense that you are truly trying to help them, and that is what I felt here, as the cat did not resist me cleaning him up.
In our subsequent TTouch sessions, this cat will still initially growl or hiss, but once you touch him on the head with the back of your hand, he settles down and really responds to touch. Hopefully the hissing and growling reaction will stop over a bit more time. Below is a photo of him - sorry about the blurriness but he was on the move :) 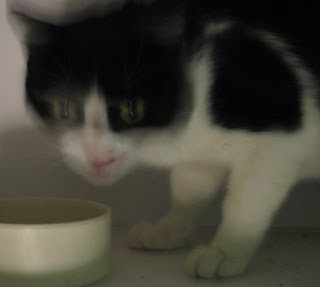 Posted by sarahsuricat at 9:57 AM