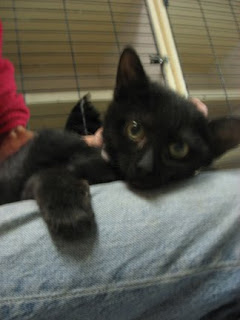 Hi folks, I have been working on five feral cats who came in at the same time, and I am happy to say that all of them have become SO much more relaxed and eager to be handled and touched. Two of the five have been adopted. The first one, a black kitty, was adopted a while ago. It has only taken a short time for it to become acclimated to its new household (including another cat) and owners. Now it will even roll over on its back for its owner to touch it.

The little darling pictured above was adopted yesterday. He was initially the second-most-scared of the bunch (the most scared was Jimmy Girl, who I have spoken about in previous posts). At first he was growling and hissing every time I opened the cage. But little by little he grew more receptive to TTouch and to being handled, and became very comfortable with me holding him on my lap to do TTouch, getting sleepy and relaxed. When the adopters came in (a man and woman with their darling pug dog in tow to help them pick out its new playmate), Este showed them how to do ear strokes on the kitty and I told them that the kitten was used to being held on a lap, so the woman tried this and the kitten looked very comfortable there. A while after they had left with the kitten, the man came back to retrieve a cell phone left behind, and he said that the woman was already able to hold the kitten on her lap in their home and it was quite at ease. I wish these animals well and look forward to the other ferals going to homes soon (crossing fingers).

By the way, Social Tees will be doing an adoption event this Saturday afternoon on First Ave between 3rd and 4th Street from 1-7 pm (look for the van), call 212 614 9653 for more information.
Posted by sarahsuricat at 12:49 PM