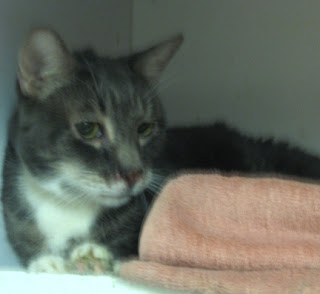 Sometimes the rescued animals that come into Social Tees shelter have behavior and/or medical issues when they arrive. This sad-looking gorgeous boy above who we call Stuart came in with a bad cold and so has needed some extra TLC.
Recently I was trained by a vet how to do subcutaneous hydration, which is a very valuable skill for any cat-owner to learn, as this can save a cat's life if he is dehydrated. Robert knows how to do the hydration but it has been great for two of us and fellow volunteer Este to all work together as a team to administer the fluids. First we have been taking Stuart out of his cage, I do some TTouch to get him good and relaxed, then Este and I contain the cat and make sure the needle stays in his body as Robert administers the fluids to the cat. He also has needed antibiotics, eye and nose medication and so after all this I have been doing some TTouch again to get him nice and relaxed before putting him back in his cage. His nose was very stopped up at first so I also did some Reiki on him, as this combined with the TTouch on his head has seemed to give him some additional sinus relief to supplement the effects of the medication.
And, at first he was not eating, so Este and I gave him some KMR milk replacement through a syringe a few times a day. Fortunately, at the end of the second night of doing this, I had a little bowl with the KMR mixture next to Stuart, and he began to drink it! I knew this was a good sign and so yesterday I opened a can of wet food in front of his cage. He jumped up enthusiastically and so I knew he must be hungry. When I put a bowl with the wet food in his cage I was happy to see him able to eat a bunch of it, and later on after his hydration and medication and TTouch, he ate some more. I am seeing quite often that TTouch seems to stimulate a cat to eat either after or during a TTouch session. At any rate, we are very happy that Stuart has turned the corner, is much less congested and is eating solid food again. I'm sure all the love he has been receiving hasn't hurt either! I think the only time he seemed to really complain last night was when I stopped doing TTouch on him to put him back in his cage :) He is looking less sad now than he was but this wise boy will always have a soulful face, he seems like such a wise, thoughtful being.
Posted by sarahsuricat at 11:37 AM