Yesterday the lovely big white cat (pictured above) who initially was quite sick and now is healthy and feeling good was adopted yesterday by a very pleasant young woman, I am so excited that this cat now has a forever home. She loves to purrrr and cuddle, and I'm sure she will have a great life with her new owner. 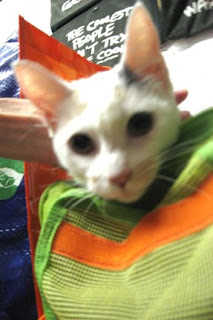 A few posts back I spoke about a little white calico (pictured above) who initially came in quite shy and soon became quite friendly. We called her Venus, as she is so full of love, she is like a little angel. Unfortunately shortly after she began to really come out of her shell, it became evident she had a very bad cold so we had to send her to the vet. I am starting to see a pattern that sometimes when a cat comes in quite frozenly and stiffly scared, it seems that part of the reason they are doing that is that they don't feel well, because sometimes after some TTouch and their body relaxes more in general it becomes easier to see these symptoms because they are not simply frozen in place.
While Venus was at the vet, I sent her distant Reiki every day. In my heart I felt that she would be OK -- she was sick when we took her to the vet but seemed to have a very strong will to make it through her illness. We had also given her fluids and fed her by hand before she went to the vet so I think we kept her from getting as sick as she might have.

At any rate, we were happy to hear from the vet that the cat was doing well and ready to be released from the vet. We were even happier when we heard that a woman who works at the vet's office was going to adopt her and would come to the shelter to find another kitten to adopt to be her playmate. Above is a photo of Venus right before she went off to her new home, along with a little grey tabby kitten. We wish her well. This small cat with such a strong and lovely spirit taught me so much.
Posted by sarahsuricat at 12:30 PM